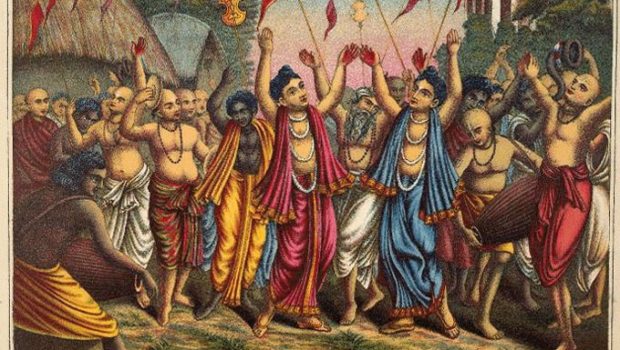 In Gaudiya Vedanta, we worship an open secret. We worship a God who is weak and “perfectly flawed,” who is constantly defeated by the strength of the affection around him. At the hands of his most intimate servants, Bhagavan is won over every single day, in every possible way: tied by Yasodamayi, defeated in wrestling by Sridama, and scolded by Radha and her sakhis. We worship a weak God because we worship love above God, as he himself does. This is a very special type of love, and thus, a very special type of God.

The essence of God is then not his status as God, but his capacity and disposition to transcend himself in divine love and eventually “become” Sri Krishna. Prema implies not only an eternal being but an eternal becoming as well. Sri Vraja Krishna clearly exhibits such dynamism – the “God” designation is discarded while svarupa-saktyananda is there to facilitate this level of transcendence in his own life. When the All-Attractive becomes supremely attracted by his own form (it being somehow reflected here and there) at a point beyond time, that rupa-madhurya is a direct consequence of a particular type of prema striking Bhagavan in a specific way; thus, he is “carving” a very specific form of himself, which is the result of the love he has received. For example, Sri Krishna pretends to show his catur-bhuja form in front of Radha, only to find two of those four arms shrinking into nothingness in the face of her divine love.

Even though Sri Hari is generally known as atmarama, for and by himself, by his very nature (and that of his svarupa-sakti) he becomes what Thakura Bhaktivinoda would call pararama, or “supremely dissatisfied” in the context of self-satisfaction. This brings Bhagavan to the point of a new inconceivable equation: the bigger the dissatisfaction, the greater the ananda. In this consideration, even the atmarama stage (also present in self-satisfied sages) is something to be transcended in pursuit of a higher taste, as the Bhagavata mentions in his famous atmarama verse:

All different varieties of atmaramas, especially those established on the path of self-realization, though freed from all kinds of material bondage, desire to render unalloyed devotional service unto the Personality of Godhead. This means that the Lord possesses transcendental qualities and therefore can attract everyone, including liberated souls.

This most important sloka was explained by Mahaprabhu in eighteen different ways to Sarvabhauma Bhattacarya, and in sixty-one different ways to Sanatana Gosvami. Indeed, there is no other verse that Sri Gauranga had glossed so much during his lila, and there is good reason for that – it powerfully teaches how an atmarama (Sukadeva Goswami being the prime example in the Bhagavata) will leave behind not only every material attachment but even his self-satisfied state, attracted by Hari ́s unmatched attributes in the context of bhakti. In other words, the Bhagavata‘s atmarama maha-vakya represents its main pramana regarding the superiority of devotion over jnana, prema above mukti. That said, being that atmarama is also another name for Krishna, this verse could ultimately apply to him as well. And, it should.

Being properly churned, the Bhagavata perpetually reveals secret meanings in its eternal pages, just as grinding the green leaves of henna gradually manifests its reddish content within. Thus, our inspiration for any novel insight must be properly grounded in scripture and blessed by our purva-acaryas. In this regard, we receive a unique hint in the first verse of rasa-pancadhyaya, which says that “although Sri Krishna is Bhagavan (bhagavan api), he made up (cakre) his mind (manas) to enjoy (rantum) with the gopis” (Srimad Bhagavatam 10.29.1). Commenting on this sloka, Srila Jiva Gosvami mentions:

So in the same way that atmarama sages become “something more” by contacting bhakti and Bhagavan, Atmarama Sri Krishna also becomes something more by being in touch with those attributes he possesses that are actually the result of interacting with his own svarupa-sakti. This interaction creates such astounding features within it, that God himself feels incomplete before such a scenario. In other words, when Rasaraja Sri Krishna witnesses the ultimate zenith of maha-bhava, Sri Radha, he is thrown into a totally new situation where he realizes that there is something in him that makes Radha the way she is, thus developing a particular void in himself and a consequent desire to taste such an experience. Hence, there will be only one possible solution to such a dilemma, the form of Sri Caitanya.

He is that same person who presented the atmarama verse in so many different ways, except for one “missing” explanation: he never considered exposing himself in the lines of such sloka. In his natural humility, and due to the depth of his descent, Sri Gaura Krishna tried to avoid this, but the actual duty of every devotee is to lovingly expose his own istadeva for the pleasure of his servants. So here we go – attempting to point to the Golden Lord, the natural evolution of Krishna’s divine dissatisfaction, as well as the subsequent lila that manifests, in order to solve such a riddle – all of which has been loudly proclaimed in the pages of the Bhagavata, especially in the atmarama verse.

As previously mentioned, the word atmarama can refer in this verse to Sri Krishna, who takes pleasure in himself. Also, the word munayo (thinker) applies naturally to him as well as the word nirgrantha, or that person who is beyond all bondage and/or standard statements of scripture. That said, he will leave such a privileged state by becoming attracted to his own wonderful qualities (ittham-bhuta-guno harih) and pursuing his desire to experience bhakta-bhava. Thus, he engages in unalloyed bhakti to himself (kurvanty ahaitukim bhaktim), such as when Radha Thakurani worships his beloved Urukrama (“the great adventurer”). But, how can Sri Krishna engage in bhakti to Sri Krishna? By considering the abheda perspective of our bheda-abheda equation, Krishna’s svarupa-sakti is actually one with him, and in that sense this particular rendering can be possible when Sri Krishna adopts the mood and luster of his para-sakti, appearing as Sri Gaura Krishna. Trying to honor Mahaprabhu’s careful and multifold presentation of this gem, and also considering the possibility of rasabhasa and viruddha-siddhanta in my own words, I have consulted with different renowned Vaisnava Sanskrit panditas and they mercifully approved the current interpretation, ensuring that both tattva and bhava perspectives were duly included in it.

Apart from Mahaprabhu’s thievery regarding Radha’s love in the context of his channa-avatara-lila, we can certainly say that one of the reasons for Gaura’s silence here was his outstanding modesty. For example, when Sri Rupa was presenting some of his poetry about Radha-Krishna before the Lord and his associates, a beautiful verse about Mahaprabhu’s glories eventually came forth and Gaura, although inwardly pleased, externally considered it as “a drop of detestable poison in an ocean of nectar.” Raya Ramananda replied that he considered such a drop not poison but actually camphor, while Gaura expressed his shame, thinking that people may joke about the subject of such verses. Ramananda invoked the proverbial checkmate, replying that “instead of joking, people, in general, will feel great pleasure in hearing such poetry, for the initial remembrance of the worshipable Deity invokes good fortune.” In this way, those devotees who insisted that Sri Rupa add a gaura-candrika section to his natakas (like Lalita-madhava and Vidagdha-madhava) sweetly disagreed with Gaura, supported Sri Rupa, and finally won their case, resulting in the famous “anarpita-carim… ” sloka.

This is what we know as gaura-lila, or that moment in eternity where Sri Krishna doubts his own status, due to the powerful experience of Sri Radha and thus, transcendentally dissatisfied, he proceeds to go after her bhava, having had a glimpse of the supreme form of svarupa-saktyananda he could never possibly conceive of. Gaura Krishna thus represents the culmination of divine dissatisfaction, simultaneously embodying the most fragile and yet volcanic face of the Absolute. While Sri Vraja Krishna may be considered the Supreme Personality of Godhead, Sriman Mahaprabhu will indeed be regarded as the Supreme Personality of Krishna. Therefore, this gaura-lila teaches us a most valuable lesson: our most empowered prospect lies in the land of vulnerability. And that ́s our open secret, that’s the God we worship.

Speaking about his own vulnerability, and what brought him here to solve his dilemma, maybe this is the reason why Mahaprabhu chose to explain the atmarama verse so many times, thus extolling the virtues of divine dissatisfaction and its ultimate reach in the form of his own dispensation. So even though we should hide our istadeva in the innermost chamber of our heart, at the same time we should qualify ourselves for properly exposing him in a pleasing way. Raya Ramananda did just that at the end of his samvada with Gaura, to the point that Gaura himself had to shut his mouth since he was saying too much. Also, Mahaprabhu said to Sanatana that only by his association was he inspired to speak so many meanings of the atmarama verse, and he concluded that “if one becomes a madman like me, he may also understand the meaning of Bhagavata as I did.” In this way, may Sri Guru and Gauranga bless us all so that one day we may acquire the required madness for truly understanding the Bhagavata, sincerely hoping that Sri Sacinandana may someday shut our mouth and throw us into his nitya-lila, our land of no return.