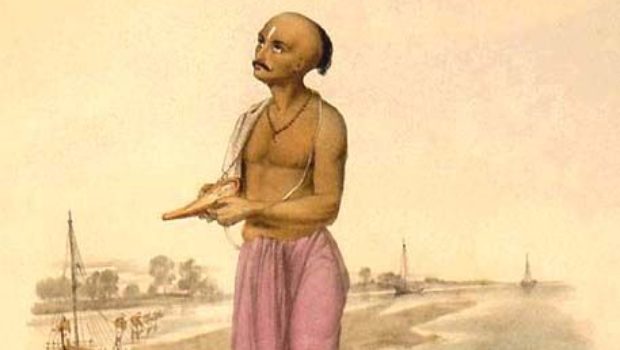 In the Hindu worldview, the world of our mental, sensual, and intellectual experience is something that comes and goes, just like everything within it does. The universe expands and contracts in beginningless and endless cycles. It consists of subjective and objective components and thus gives rise to the questions of “what’s out there?” and “who is asking the question?” The binding force that brings these two components together is karma. And like the world cycles, ourselves, and the objective content of the world, karma is also beginningless. However, unlike everything else, our individual karma can come to an end.

We are born into ignorance, an ignorance that was present before we were born. From ignorance comes material desire, and from material desire comes action in relation to the world around us (or our perception of it) and its consequences—karma.

How can this karmic root of ignorance be uprooted? One has to learn to look within. More important than what’s out there is who’s in there asking the question. How much more important, more valuable? Well, there is no value “out there,” no qualitative reality. Quality is a property of the subjective realm, of which we are a unit. As Mark writes, paraphrasing Jesus of Nazareth, What profit is there in gaining the entire objective world at the cost of knowing the subjective observer—the atma—an eternal unit of consciousness?

But our ignorance is deeply rooted and requires more than theoretical knowledge to uproot it. Such knowledge helps, much like knowledge of a psychological dysfunction can be helpful in endeavoring to overcome it. But just as such emotional dysfunctions need to be uprooted emotionally rather than rationally, similarly our karmic conditioning must be uprooted by another form of conditioning, a transrational practice. We require knowledge of the predicament we find ourselves in and a practice to overcome it.

Just as karma is an environmental conditioning derived from investing in the objective world, bhakti is also an environmental conditioning, but it is derived from investing in the realm of consciousness. Spiritual practice—sadhana—is such an investment, one that constitutes the culture of wise love. And in the Gita, bhakti—wise love—is described as the “king of knowledge.” To love is to know. Love involves both knowing and acting combined. On the other hand, karma is action arising out of ignorance. Thus, ending one’s karma amounts to remaining environmentally conditioned but changing the nature of that conditioning such that one is propelled to act devoid of the spirit of exploitation and with love in relation to our source.

And in contrast to our karma arising out of beginningless ignorance that can come to an end, bhakti begins but never ends. How does it begin? It begins with the influence of saintly association—sadhu-sanga—which itself is a form of bhakti. Thus, bhakti comes from bhakti and it is the force by which our beginningless karmic trajectory can come to an end. Bhakti in practice undresses the atma, which in its nakedness is more beautiful in its resemblance to its source than in any role it plays in the dress and drama of karmic samsara, and bhakti in ecstasy re-dresses that atma beautifully and suitably for the date with the Divine.

One Response to Beginningless Ignorance and Endless Love