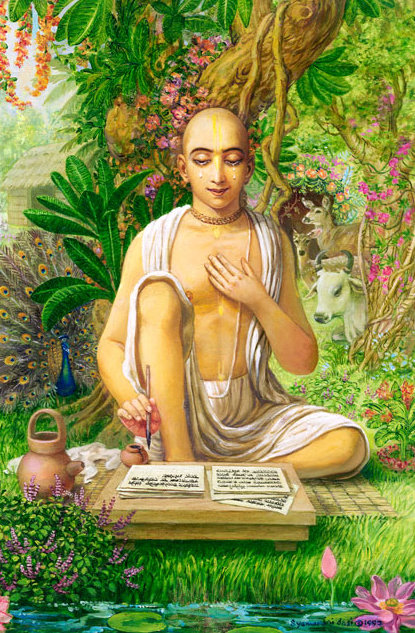 Jiva Goswami belongs to the Brahma-Madhva-Gaudiya Vaisnava sampradaya, a spiritual lineage that traces its origins to the dawn of creation. Some five hundred years ago, this lineage was infused with deeper insights about the significance of Srimad-Bhagavatam by Sri Caitanya, a God-intoxicated mendicant said to be an incarnation of God (Sri Krishna) and more. The appellation “Gaudiya” added to the Brahma-Madhva sampradaya represents Sri Caitanya’s influence on the lineage resulting in a branch of its own. This branch, however, has been likened to the tree itself, so nourishing has Sri Caitanya’s influence been to the popularization of Vaisnavism in general. It is fair to say that in this century this particular lineage has indirectly brought more attention to all other branches of Vaisnavism than any direct effort on the part of any of these lineages. Sri Jiva Goswami is the greatest scholar of this Gaudiya lineage. In Tattva-sandarbha, he has made intelligible the metaphysic upon which Gaudiya Vaisnavism rests.

As for Jiva Goswami’s spirituality, the tradition acknowledges him to be an eternally liberated soul appearing on earth as an instrument for the will of the divine. The Gaudiya lineage acknowledges the transcendental cowherder Sri Krishna to be the acme of divine existence. Sri Jiva is seen as one of Sri Krishna’s intimate gopis, or cowherd girl servitors, who associates with him eternally in a spiritual body beyond the constraints of time and space.

In his earthly appearance, Jiva Goswami became a mendicant as a mere youth. Hailing from West Bengal, he followed the footsteps of his father and two uncles who, due to the influence of Sri Caitanya, left household life to embrace the world family and the culture of divine love. As a child, Jiva Goswami met Sri Caitanya. Then, seeing his elders leave prominent government positions and luxurious family lives to follow Sri Caitanya into a life of devotion, Sri Jiva inquired from his mother about devotional life and renunciation.

Sri Jiva’s mother did not take the boy seriously and replied that to enter such a life one must shave one’s head and adopt the robe of a mendicant. But taking her words seriously, Jiva appeared before her in devotional attire. Not only did he adopt the dress of a monk, he adopted the inner heart of one as well. Shortly thereafter he left home for the spiritual pursuit.

Sri Jiva met the eternal companion of Sri Caitanya, the avadhuta Nityananda Prabhu, in Navadvipa, West Bengal. On Nityananda’s instruction he set out for Vrindavana, where his uncles had taken up residence. But first he stopped in Benares. There, under the tutelage of Madhusudana Vacaspati, he studied all of the systems of Indian philosophy, as well as logic, Sanskrit, and other branches of knowledge.

After his education, he proceeded to Vrindavana, where he spent the better part of his life writing about and exemplifying the life of devotion and transcendental love. He wrote many books, his entire contribution consisting of more than four hundred thousand verses, more than that contained in all of the eighteen principal Puranas combined.

Jiva Goswami’s most important literary contribution is a six part treatise, the Sat-sandarbha. The Tattva-sandarbha is the first part. The word sandarbha literally means a “stringing together.” In this case, it is a stringing together of verses from Srimad-Bhagavatam to explain the inner, if not secret, spirituality that Srimad-Bhagavatam and thereby all of the Vedic literature is ultimately pointing to. It is a spirituality that Sri Caitanya embodied and Jiva Goswami gave shape to in written form. Sri Caitanya flowed beautifully yet unapproachably like a great waterfall of love of Godhead. Sri Jiva made a lake out of his ecstasy in the form of Sat-sandarbha, such that people of this world could approach that which Sri Caitanya personified, drink from it, and eventually swim in it, losing themselves in a tide of transcendental love.