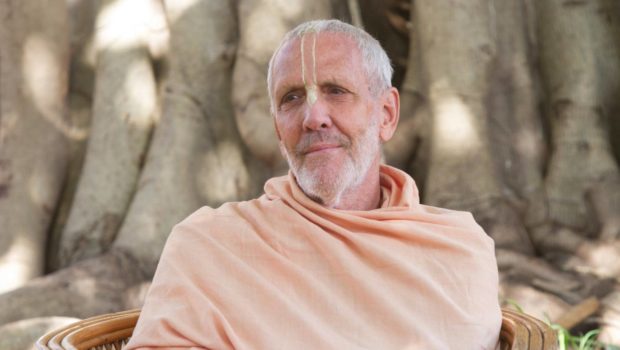 The Disappearance of Srila Narasingha Maharaja

On Thursday, January 2nd, 2020 at 1:31pm, corresponding with saptami during the month of Pausa, Caitanyabda 534, our beloved Guru Maharaja, Om Visnupada Paramahamsa Parivrajakacarya Sri Srimad Bhakti Gaurava Narasingha Maharaja entered the eternal midday pastimes (madhyahna-lila) of Sri Sri Radha-Madhava. He was surrounded by his disciples, friends and well-wishers who were loudly singing the holy names. According to astrological calculations, Srila Guru Maharaja departed at an auspicious moment, indicating that he is no longer a participant of this material realm.

Srila Guru Maharaja had been performing pastimes of illness for about five months while establishing an asrama in Vermont, USA. During that time, he extended his mercy to many disciples and well-wishers, giving them final instructions and blessings. Although he experienced many physical disturbances, Srila Guru Maharaja remained mentally alert and at the end of December 2019, he decided to return to Govindaji Gardens in India. How all this unfolded was nothing short of miraculous. Indeed, everyone that personally witnessed this could see the divine hand of Lord Sri Krishna at play. All the devotees of our mission are deeply indebted to Guru Maharaja’s very dear friend, Sripada Bhakti Abhaya Gosvami Maharaja and Kunjavihari Prabhu, the object of Guru Maharaja’s affection. Both these devotees performed outstanding guru-seva during Srila Guru Maharaja’s illness pastimes in Vermont. Gosvami Maharaja and Kunjavihari Prabhu were able to bring Guru Maharaja back to India against all odds. All the devotees in Vermont – Kalki, Manjari, Daruka, Yogamaya, Vasudeva, Ananga, Bhakta-priya, Krishna Kirtana, Daniella, Lila-smarana, Vraja-kisora, Vrnda, as well as Hari Prasada and family, all helped in so many ways to make this seemingly impossible journey a reality. Other devotees such as Prahlada Prabhu and Anuradha also contributed in many ways to serve Guru Maharaja. Our humble dandavats to all these Vaisnavas and all the other innumerable devotees who helped.

On the day of his disappearance from this mortal world, for about six hours, Srila Guru Maharaja’s eyes remained open, without blinking. Then, five minutes before his departure, all his vital signs returned to normal again and at 1:31pm, his eyes closed for the last time.

His transcendental form was bathed, he was dressed in new cloth and tilaka was applied in twelve places. Then the sannyasa-mantra was written on his chest and he was decorated with candana and flower garlands. At 6:30pm hundreds of people flocked to take his darsana, offering garlands and flowers at his lotus feet. For many hours, the devotees and many members of the public sat outside on the veranda of his bhajana-kutira chanting the maha-mantra. On hearing of his departure, many beautiful words of appreciation came from godbrothers, godsisters and admirers from all corners of the globe.

The following morning at around 8:00am, Srila Guru Maharaja was carried in procession from his room for darsana of Srila Prabhupada, Sri Sri Gaura-Radha-Madhava, Jagannatha, Gaura-Gadadhara and Yoga-Narasimha. As his transcendental form came to Govardhana Hill, the bamboo under the basket he was being carried in, began to slip and the devotees carrying him were forced to put him down between Govardhana and Govinda Kunda while they fixed the bamboo. Those who are of keen spiritual intelligence will understand that this was no accident – it was indicative of the desire of our purvacaryas to find residence at the foot of Govardhana Hill where they engage in the nitya-seva of the Divine Couple.

His divine form was then lowered into the samadhi-pitha, where he was offered worship and naivedyam by Kunjavihari Prabhu. All the devotees then took antya-darsana (last darsana) of Srila Guru Maharaja. After the samadhi-pitha was filled, a photo of Srila Guru Maharaja was established and the first arati was offered by Syamasundara Prabhu, during which time Gaura Gopala Prabhu sang the newly composed samadhi arati song for the pleasure of Guru Maharaja and the devotees.

For all his disciples and followers, Srila Guru Maharaja was like a blazing sun, dissipating the darkness of ignorance. His articles, books and lectures are the invaluable legacy that have inspired devotees around the world, and will continue to do so for years to come. But now the sun of Srila Guru Maharaja has set, and we, his followers, are drowning in a deep, dark ocean of intense pain and separation, bereft of shelter. We have lost our spiritual guide and our dearmost friend – the thought of never seeing him again in this lifetime has broken our hearts. We will never again be able to sit with him, discuss philosophy, laugh or honour prasadam together. Everything around us feels bleak and lifeless.

Now that I no longer have the preserver of my life, the land of Vraja has become desolate, Govardhana Hill has become like a great serpent, and Radha-kunda appears like the gaping mouth of a ferocious tiger.”

Our only consolation is that he is now with his Guardians, Srila Prabhupada, Srila Sridhara Maharaja and Srila Puri Maharaja – either preaching with them on another plane, or with them in the green pastures of Vraja-bhumi happily serving the Divine Couple, Sri Sri Radha-Damodara.

He has left us with the priceless gift of devotional service and the treasure of Gaudiya siddhanta, and all his sincere and dedicated followers will be able to find the strength that they require and attain his direct, personal association by faithfully adhering to his instructions and propagating them.

One Response to The Disappearance of Srila Narasingha Maharaja