Uttarayana and the Soul’s Departure 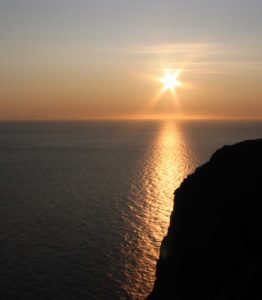 As the sun begins its journey north, the devas awaken from their slumber and start their day. This period is called uttarayana, the sun’s six month northern orbit. It is mentioned in the eighth chapter of the Bhagavad Gita with regard to the yogi’s passing from this world.

After having spoken about pure devotion (ananya-cetah satatam yo mama smarati nityasah) and how his devotees easily (sulabhah) attain his abode, Krishna tells Arjuna of two paths taken by departed souls: one in light, the other in darkness. The period of uttarayana is mentioned in relation to the path of light, traversing which one never returns. The six months of the sun’s southern orbit, the night of the devas, is known as daksinayana. It is mentioned in relation to the path of darkness, by which one is destined to return even after attaining heaven.

This section of Sri Gita is taken metaphorically by Baladeva Vidyabhusana. He also understands it as referring to the paths of jnana and karma yoga mixed with devotion. Furthermore, it indirectly underscores by way of contrast the sublime nature of the path of pure devotion. After describing the path of light and that of darkness, Krishna remarks that pure devotees need not be concerned with either of them.

Metaphorically, the two paths speak of time (kala). Sri Krishna says yatra kale tv anavrttim avrttim caiva yoginah prayata, “I shall now speak of that time at which departing yogis return and do not return.” Krishna appears to be speaking about a particular time, yet in describing the path of light, he mentions not only time, but objects: “Fire, light, day, the fortnight of the bright moon, and uttarayana” (agnir jyotir ahah suklah san-masa uttarayanam). The path of darkness is also described in terms of times and objects: “Daksinayana, smoke, night, and the dark fortnight” (dhumo ratris tatha krsnah san-masa daksinayanam). Had Krishna not been speaking of time metaphorically, the objects such as fire, light, and smoke would not be included, as they have nothing to do with time.

What then is Krishna describing? By mentioning particular times and objects, he is referring to the deities that preside over them, deities that are designated to assist the soul in its passage (Ativahika devas). As a grove that has a majority of mangos is called a mango grove, even when other trees are also present there, similarly since the series of deities that the passing soul meets is predominated by deities of time—the day, fortnight, six months—the word “time” is used to refer to the entire series of deities designated to assist the jiva in its journey.

However, not all devotees follow the path of light Krishna refers to. Here we come to the greater value of understanding this abstract section of the Gita. It contrasts the complexity involved in passage for those on paths other than that of pure devotion. The sublime nature of suddha-bhakti is that it has the power to attract Krishna (krsnakarsini). For those nirapeksa (unalloyed) devotees who have spent their lives pining for Krishna, as their time of passage approaches, Krishna himself loses patience and cannot wait for them to come to him gradually through the presiding deities on the path of light.

Gopal-tapani sruti informs that to those who worship the cowherd Krishna by the gopal mantra, Krishna directly reveals himself. This is confirmed later in the Gita when Krishna tells Arjuna that those who are attached to him (mat parah) tesam aham samuddharta, “I personally deliver them,” na cirat, “very quickly.”1 In chapter nine of the Gita, Krishna assures Arjuna that he personally carries his unalloyed devotees (vahamy aham) like a husband carries his bride accross the threshold into the house of prema-bhakti.2 Badarayana Vyasa says in his Sutras, “visesam ca darsayati,” implying that the scripture declares a difference with regard to the passing from the world of nirapeksa devotees. Narada Muni’s life and liberation related in his own words in the Bhagavata also serve to illustrate this difference, as also the words of the Varaha Purana affirm, “Without hindrance, I bring him seated on the shoulder of Garuda to the supreme abode by my sweet will by a path other than that of Arciradi.”

Arciradi refers to the path of light under discussion in which the first deity is Archi, the deva of light, the last four-faced Prajapati Brahma. After reaching Brahma, jnanis attain liberation along with him at the end of his very long life. Altogether there are 13 deities on the path of light, all of which are not directly mentioned in the Gita. As the desireless jnani leaves his body though the 101st coronary artery, he moves along the path of light from one deity to the next, never to return to birth and death. This path is also tread by some devotees, for only the unalloyed devotees are directly delivered by their Lord.

Thus the import of Sri Gita in describing the paths of light and darkness is twofold: Krishna tells us that in general we should take the path of light through the culture of spiritual knowledge, lest we for all of our efforts gain but a return ticket to the world of birth and death. Furthermore, he tells us that those who are mahatmas3, great souls, while in knowledge of these paths, need not be concerned with either of them, complicated as they are. Their path is simple and expedient.

Krishna concludes the eighth chapter of the Gita with two verses, which while applying to transcendentalists in general, are more about great devotees whom he described earlier in verses 14 and 15 as ananya-cetah and mahatmanah, respectively. In the Gita, the term mahatma is reserved for unalloyed devotees. Krishna uses this term only in relation to his dearmost devotees, not to any other type of transcendentalist. In the ninth chapter, he fully describes their characteristics in 1 1/2 verses (9.14–15).

Bhisma was one such devotee, yet in Mahabharata we find that he waited until the first day of uttarayana to leave the world. Why did Bhisma wait until uttarayana to leave the world? He could have left at any time in accordance with the benediction he had received from his father. He was a perfect yogi, and more, a great devotee. Could he have been confused regarding the figurative mention of time in the scriptures?

Bhisma could not have been confused. Perhaps by his example he was instructing ordinary persons with regard to auspicious and inauspicious times of passage. This is plausible because despite the fact that the Gita is often understood to refer to two paths and not two times of passage, not all devotees understand it in this way. Moreover, there are auspicious times at which ordinary persons are better off leaving from this world, uttarayana being one of them.

No doubt Bhisma was instructing ordinary people in general, yet his life was really a lesson in how to lead an extraordinary life, a life of devotion. Thus what he may have taught about ordinary dealings was merely a by-product of his life of devotion. Bhisma taught us to be unalloyed devotees of Krishna, mahatmas, and thus his passing from the world during uttarayana speaks loudly to us about this, while only whispering about anything else.

If we are to hear that which Bhisma speaks loudly to us about, we will have to pay close attention. This is the standard of Bhagavata dharma. The Bhagavata (both the book and mahabhagavata devotee) speak loudly to our hearts. Unfortunately, our hearts are preoccupied with so many desires, and thus unless we pay very close attention (nityam bhagavata sevaya) they will not be cleansed of material desire (nasta prayesu abhadresu), and we will not hear what the Bhagavatas are actually saying.

What has Bhisma told us in his waiting for uttarayana to pass from the world? Is there another understanding of uttarayana? Indeed, those who are alive with bhakti will understand Bhisma’s passing in another way. They read the scripture with their hearts, with feeling, and this feeling guides them to draw out the devotional conclusions. Because they have spiritual feeling, they understand the necessity to look for a deeper meaning when the Mahajana’s examples appear to speak of something less than pure devotion.

Why was Bhisma waiting for uttarayana? He was waiting for he who took shelter (ayana) within the womb of Uttara—Krishna, the Deity of all deities, when he protected the embryo of Maharaja Pariksit. Uttarayana is another name for Krishna. He is the deity of Bhisma, who waited for Krishna to come before his eyes before leaving the world.

Those whose thoughts dwell only on Krishna, time himself, have little concern for time and place other than to glorify Krishna thoughtfully. Such mahatmas, says the Gita, are always glorifying Krishna, satatam kirtayanto mam, regardless of time and place considerations (satatam). At all times, they engage in spreading the fame (kirti) of Krishna, and by this become famous themselves, as real glory, real fame, is to do good to others. In the words of Mahaprabhu, they do para upakara (the supreme welfare), and such persons are themselves worshippable in this world, bhuvi grnanti ye bhuri-da janah. They pass from this world never to return, and they do not go step-by-step (krama mukti). By way of kirtanam they go direct, passing over the heads of all deities and devas.

5 Responses to Uttarayana and the Soul’s Departure