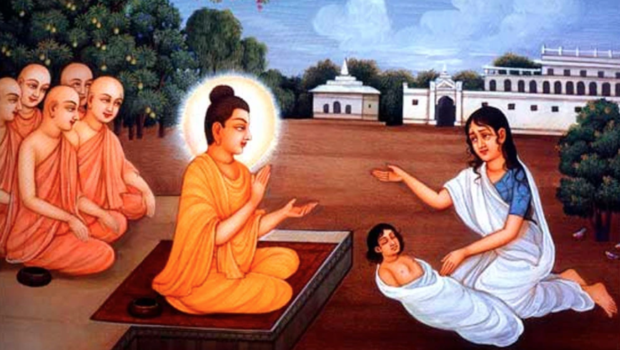 Kisa Gotami, the legend goes, was grief-stricken—perhaps even mad—after the death of her young child, her only son. Who wouldn’t be? Those who have experienced “unnatural” deaths- deaths that come too soon, too quickly, or unexpectedly can be left shocked, in a stupor. Fifteen years ago last week, when I was 25 years old, I sat alone at the bedside of my 47-year-old mother as she passed away after a nearly three-year bout with a brain tumor. Though I knew death was imminent and had psychologically girded myself for this unavoidable reality, the moment of death’s arrival was too much to bear: like the glossolalia of the apostles on Pentecost whose earthly faculties were unable to contain the power of the Holy Spirit, the otherworldly terror of being face to face with my mother’s death tore through me, enveloping me. I stumbled from her hospice room down the hospital hall, shaking and unable to speak until a nurse found me and I finally blurted out, through tears, like one learning to speak: “she’s gone”. At that moment, like Kisa Gotami, I’d gone a bit mad. And, like Kisa Gotami, the pain lasted.

C.S. Lewis, in his A Grief Observed, written after the death of his wife, captured well the weeks that followed my mother’s death:

No one ever told me that grief felt so like fear. I am not afraid, but the sensation is like being afraid. The same fluttering in the stomach, the same restlessness, the yawning. I keep on swallowing. At other times it feels like being mildly drunk or concussed. There is a sort of invisible blanket between the world and me.

In the weeks that followed, I came across the 1955 film, Ordet, by Danish director Carl Theodor Dreyer. In this beautifully shot film, a Christ-like figure raises a woman from the dead in 20th century Denmark. I began to have dreams of the same for my mother. Four months later I was in Greece, visiting the small island of Aegina, praying at the tomb of St. Nektarios for some kind of heavenly intervention: a reversal of time, a resurrection, a waking from this dream that I found myself unable to bear or accept. I knew that each of these prayers was entirely irrational. Beyond irrational. Perhaps veering into the realm of delusion and psychosis. I understand what grief can do, Kisa Gotama. I do. And you—you lost a child.

Kisa Gotama was advised to find Sakyamuni, the Buddha.

She said to the Buddha: “Lord and Master, give me the medicine that will cure my boy.”

The Buddha answered: “I want a handful of mustard-seed.”

And when the girl in her joy promised to procure it, the Buddha added: “The mustard-seed must be taken from a house where no one has lost a child, husband, parent, or friend.”

Poor Kisa Gotami now went from house to house, and the people pitied her and said: “Here is mustard-seed; take it!” But when she asked, “did a son or daughter, a father or mother, die in your family?” They answered her: “Alas the living are few, but the dead are many. Do not remind us of our deepest grief.” And there was no house but some beloved one had died in it.

Kisa Gotami became weary and hopeless, and sat down at the wayside, watching the lights of the city, as they flickered up and were extinguished again. At last the darkness of the night reigned everywhere. And she considered the fate of men, that their lives flicker up and are extinguished. And she thought to herself: “How selfish am I in my grief! Death is common to all; yet in this valley of desolation there is a path that leads him to immortality who has surrendered all selfishness.”

When I first heard this story in the years after my mother’s death I felt nothing. It brought no consolation. In fact, I recoiled from the thought of it, interpreting its message as cold and callous. Possessing an intellectual understanding of the inevitability of death did little to assuage my sorrow. Yes, I know we all die. No, that doesn’t help me feel any differently about it.

Here’s what I failed to understand, but have grown to see: it took Kisa Gotami’s interaction with those in grief, those who had lost, to internalize the message. She was face to face with that human grief—she saw the pain written on the faces of the poor villagers; she looked into their eyes as they told, one after another, a universal story of loss. The Buddha could have simply reminded her, “Kisa Gotami—we all die. It’s a universal fact of life”, but he didn’t. He sent her out to see the villagers face to face, and in the space of that intimacy, realization dawned. From that realization compassion for all the suffering of the world sprang forth. I believe it was the birth of that compassion for a universally suffering humanity—her own humanity very much included—that finally brought her relief.

This moment is historic. We are facing the real possibility of millions of deaths around the world. The cold calculus of rationing care, of allocating limited resources to the young and “productive,” is quickly taking shape, as doctors prepare to make dreadful decisions. Decades of neglect of the commons under neoliberal economic policy are coming to light and the fault lines in a declining empire are becoming exposed. In the midsts of this, we see acts of kindness and community solidarity: email lists and Facebook groups for mutual aid, my elderly neighbor who only purchased one box of tissues when just three boxes were left on the shelf because “others will need them”, and the way friends and family are extending themselves to each other.

This is a moment of universal suffering. While the rich and powerful will find ways to insulate themselves against the worst of it and the poor will inevitably suffer more, there is no absolute escape from the possibility that one might be exposed to this virus. At times, the all-pervasive nature of this crisis brings me to a place of absolute dread: for myself, for my immuno-compromised wife, for the elderly and infirm, for those who will die unnecessarily from our nation’s lack of preparedness. But it is in the all-pervasive nature of this crisis that I am also finding solace. The universality of the moment, at times, draws compassion from me. The recognition that we are all in this together, in a web of mutual dependency that is material and spiritual in nature, brings relief. You are suffering just like I am suffering. You fear as I fear. We must humble ourselves to that shared reality. I am not special—and that’s liberating.

But as was the case with Kisa Gotama, these moments of compassion that bring relief from dread are most deeply felt when we reach out to others: in conversations with our neighbors, in contributing materially to support the vulnerable, in trying to be especially good to our partners and those in our homes who also share our fears. Myopic self-interest diminishes our humanity. The opposite, of course, is also true: compassion (literally meaning “to suffer together”) for others broadens it and, almost counter-intuitively, frees us from the prison of our small selves.