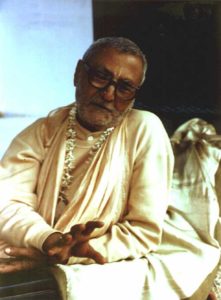 Because the soul is a particle of consciousness, he is endowed with free will. Eliminating free will, only gross matter remains. Without independence, the soul could not progress from bondage to liberation, and his ultimate salvation would be impossible. But his spirit of exploitation is a foreign force, an intoxicant; a miscalculation that surrounds his independence.

Life’s objectives may be scientifically analyzed as threefold: exploitation, renunciation, and dedication. The most common tendency is found in those engaged in exploiting other persons, species, or elements, for mundane sense enjoyment. Such persons desire to materially elevate themselves in the present environment, and thus they are described as elevationists. A more sober class discovers the severe equal and opposite reactions to worldly pursuits (karma), and they engage in renunciation of the world in search of equilibrium. They hope to escape the world’s concomitant reactions and sufferings. Thus their goal is liberation, and they are known as salvationists or liberationists. But if we dive deeply into the revealed scriptures, it will be apparent that the pursuits of both exploitation and renunciation are not only fruitless, but injurious to real progress.

The normal, wholesome, and happy plane is in the life of dedication. Without exploiting or borrowing anything from the environment, and without attempting to artificially renounce it, one who is sincere to dedicate himself naturally comes into contact with a higher and more subtle plane of life. By his readiness to give and serve, he will attain to a higher society and achieve appropriate guidance. The enjoying spirit forces one to be associated with a lower section to control and enjoy. And the renouncing spirit allures even the scholars with its “prestigious” superiority over exploitation. Thus it is more dangerous, just as a half-truth is more dangerous than falsehood. As it is difficult to awaken someone from the deepest possible sleep, the liberationists may remain for incalculable time within their cell of non-differentiated liberation. But the higher existence will invite the service of one who desires to purely dedicate himself without remuneration.

Service, dedication, is the summum bonum of the teachings of the Vaishnava school, the third plane of life where every unit is a dedicating member in an organic whole. In such a normal adjustment, everyone mutually assists one another in their service to the center, the higher recipient, the highest entity. Everything is existing to satisfy him. If this were not the case he would not be the Absolute. God is the prime cause of all causes, and everything exists for him, to satisfy him.

A barren conception of mere “deathlessness” cannot afford us any knowledge of a positive thing, but only freedom from the negative side. If immortality means “no influence of mortality,” what, then, is its positive conception? What will be the nature, movement, and progress of that which is immortal? Without this understanding, immortality is only an abstract idea. Because it does not appear to exhibit the symptoms of death, stone would be “more immortal” than human beings, and conscious entities would be “mortal,” forever denied immortality! What, then, is the positive conception of immortality? How are the immortal “immortal”? What is the positive reality in immortality? How can one become immortal? One must search out his intrinsic location in the universal order. It will not do to attempt to solve only the negative side of life which is full of suffering—birth, death, infirmity, and disease. We should know that there exists a conception of life worth living for. This positive side has been almost totally neglected in most general religious views.

For instance, the Buddhist theory is that after liberation, nothing remains. Buddhists crave absolute extinction of material existence. And the Shankarite monist theory of liberation is to lose one’s individuality by “becoming one” with the non-differentiated aspect of the Absolute. They postulate that when the triad of seer, seen, and seeing, or knower, knowable, and knowledge culminate at one point, the triad is destroyed and nothing remains.

This is a vague area of “negative immortality.” The “oneness” in which the perception of individuality is obscured is a marginal or “buffer” state midway between the material and spiritual worlds. Composed of innumerable souls, it is an immortal plane devoid of specific variegatedness. It possesses positivity only in the sense that it is a plane of existence, a background, but in itself it lacks a positive development of variegated existence. The nature of the background is oneness, and development woven over it necessitates plurality or a differentiated nature.

Thus, the “immortality” of the monisticc schools such as the Shankarites and others offers no positive life. But in Vaishnavism, immortality is a positive, dynamic existence. Above the non-differentiated Brahman aspect of the absolute, the transcendental variegated experience begins. Situated there in the spiritual plane is the positive spiritual realm.

Transcending the vague areas of “negative immortality” that the monists aspire for, the devotees—the Vaishnavas—dedicate themselves to the life of eternal devotional service to Godhead of the transcendental realm. Although the soul can adapt himself to a fallen state of existence in the planes of exploitation and renunciation, he is inherently adaptable to the positive life in the realm of the Godhead beyond time and space. Positive immortality is possible only for the surrendered. Only those who have wholly given themselves to the center are living in eternality.

With a broad vision, we must know ourselves as created of smaller stuff, and thus only with assistance from above can we improve our situation and achieve a position in the higher plane. A submissive, serving attitude is necessary. If we submit, the universal authoritative aspect of the Absolute will take us upward to a higher prospect. He is the autocrat, the absolute knowledge, the absolute good: everything about him is absolute. Being in a vulnerable position as we experience in this world, why then should we not submit to him?

The road to the sphere of transcendence is the deductive or descending method. We can reach the absolute good, the absolute will, by his consent alone. Only by faith in absolute surrender is anyone allowed entry into that domain; never by “exploration,” by “colonization,” or by attempting to become a “monarch” there. No inductive or ascending method such as renunciation or ordinary yoga can compel him to accept us. Whosoever he chooses can alone reach him. Although the highest point of the renunciates is desirelessness or freedom from possessiveness, the surrendered soul is naturally desireless. Detachment is only the negative side of surrender, and above selflessness, the devotee surrenders himself to the higher substance, and this is what it means to be awake in another world, another plane of life. Such is the positive Vaishnava conception of life — to determine one’s real self beyond the jurisdiction of the world of misconception.

The nature of progressive substance is eternal existence, knowledge, and beauty. The one harmonizing organic whole contains similarities and differences, held inconceivably in the hand of the Absolute. And there is no anarchy in the absolute power. Nonetheless, mercy is found to be above justice. Above judiciousness the supreme position is held by love, sympathy, and beauty: “I am the absolute power, but I am friendly to you all. Knowing this you need never fear” (Bhagavad Gita 5.29). This revelation relieves us of all apprehension: we are not victims of a chaotic environment, but it is judicious and considerate, and the ultimate dispenser is our friend.

Surrender is the foundation of the world of devotion. It is the very life and essence. One cannot enter into that domain without surrender. It must be present in every form of service, and to attempt divine service without it will be a mere imitation or a lifeless formality. The entire gist of the Vedic instruction is to dedicate oneself to the service of the Godhead. Without surrender, the activity will be adulterated with exploitation, renunciation, artificial meditation, and so on.

By constitution the soul is the God’s servant, and the Godhead has the right to do anything according to his sweet will. If accepting this truth we undertake devotional practices, only then will our activity be devotional. The activity of the self-dedicated soul alone can be called devotion. Sincere prayer will help us to seek the help of the Godhead, but again, prayer in the spirit of surrender can alone reach him. The path of devotion entails inviting the positive to descend and embrace us: “I am very low and you are so high. You can purify me for your higher purpose. Be pleased. Otherwise I am helpless.” It is impossible to take him captive in the cage of our knowledge. Only the way of devotion can help us. In every respect he is high, great, and infinite; and we are comparatively small. His mercy, his sympathy, love, and grace are the only medium through which we can come to know him. And cultivating good faith in that autonomous sweet land which is so high, we will earnestly hope and pray to be associated with the Absolute as his devotee; and that will bring our happy prospect for the future.