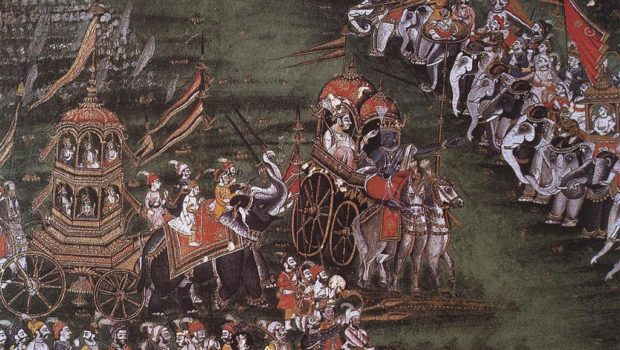 By Bhakti Prajnana Kesava Goswami, originally published in the Gaudiya-patrika, circa 1930.

The Srimad Bhagavad-gita is Upanishad-cudamani, the crest jewel of all the Upanisads. In comparison to other Upanishads, Sri Gita specifically establishes Bhagavan’s lilamayatva (being endowed with lila). Also, in the verses that sing the glories of Gita (Gita-mahatmya), it has been described as the essence of all Upanishads:

This Gitopanishad, Bhagavad-gita, the essence of all the Upanishads, is just like a cow, and Sri Krishna, who is famous as a cowherd boy, is milking this cow. Arjuna is just like a calf, and learned scholars and pure devotees are to drink the nectarean milk of Bhagavad-gita.

The speaker of Gita, which is a part of Mahabharata, is Devaki-nandana Sri Vasudeva. However, in the above verse, it is said ‘dogdha gopala-nandana‘ i.e. the milkman (speaker) is Goparaja-nandana Krishna. It is thus clearly understood that Vrajendra-nandana Vrindavana-bihari Sri Krishna alone is the speaker of Sri Gita. Although he has spoken Gita in his Vasudeva form, his own statements have revealed his real rasamaya-svarupa. Our goswamis have indicated in their literature that another name of Mother Yasoda is Devaki, and Devaki-putra (the son of Devaki) is indeed another name of Yasoda-putra. Although Devaki-putra Vasudeva is apparently the speaker of Sri Gita, Sri Nanda-nandana Krishna is the actual speaker.

A person who gives up all fruitive activities and offers himself entirely unto me, eagerly desiring to render service unto me, achieves liberation from birth and death and is promoted to the status of sharing my own opulences.

Therefore, my dear Lord, I have chosen you as my husband and I surrender myself to you. Please come swiftly, O Almighty One, and make me your wife. My dear lotus-eyed Lord, let Sisupala, who is like a jackal stealing the property of a lion, never touch the hero’s portion.

Completely abandoning all bodily and mental dharma, such as varna and asrama, fully surrender to me alone. I shall liberate you from all reactions to your sins. Do not grieve.

Those whose minds are absorbed in me and whose lives are wholeheartedly devoted to my service derive great satisfaction and bliss from constantly enlightening one another about my tattva and performing kirtana of my name, form, qualities, and pastimes. Upon those who perform bhajana to me with love, yearning for my eternal association, I bestow the transcendental knowledge by which they can come to me.

Those whose minds and lives are devoted to me and who always meditate on me, always speak about me and derive satisfaction in me alone, their minds feel relaxation and comfort only by thinking about me, and they are constantly desirous of perpetual union with me. I bestow upon such bhaktas buddhi-yoga, transcendental intelligence and knowledge by which they can attain me.

Most Gita commentators, including Srila Sridhara Swamipada, explained these two slokas from the perspective of common people only. However, vidagdha-siromani Sri Krishna cannot check himself from speaking the core instructions, even in the midst of speaking his general instruction. That essential instruction is to render visrambha-seva, intimate loving service unto him. These commentators give a general explanation of the component ‘ramanti ca‘ in their purport which is similar to the explanation of ‘tusyanti ca.’ Thus, there remains no specific significance to the phrase ‘ramanti ca.’ However, unless there is a specific meaning to these words, there would have been no reason for Krishna to use them. Srila Baladeva Vidyabhusana Prabhu and Srila Visvanatha Cakravarti Thakura have therefore excluded the general meaning of ‘ramanti ca‘ and have only accepted its specific meaning through its verbal root (which carries its innate meaning). Ram-dhatu i.e. the verbal root ‘ram‘, means ‘krida‘, sport or play. Use of the verbal root ‘ram‘ not only indicates bhava-yukta atma-nivedana, but it indeed also indicates the topmost among all bhavas—madhura-bhava-yukta atma-nivedana.

O Deva, just as a father forgives his son, a friend tolerates a friend, or a lover excuses his beloved, please forgive all my offenses.

I am svabhakti–rasika, the enjoyer of the rasa derived from the happiness of my own bhakti, and I bestow upon my devotees that buddhi-yoga by which they attain me. I inspire their buddhi in such a manner that they can understand me, who am replete with unlimited qualities and majesties. Thus, they can attain me by their worship.

Srila Visvanatha Cakravarti Thakura has said in his purport to this verse:

I bestow upon them buddhi-yoga. I inspire that buddhi-yoga within their hearts’ tendencies. That buddhi-yoga cannot be achieved by individual efforts, nor can it be obtained from anyone else. It is bestowed by me alone, and only such bhava-yukta sadhakas can receive it. This is the meaning of Krishna’s words.