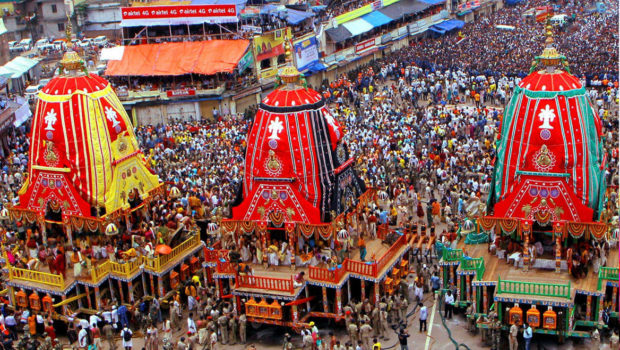 By Debabrata Mohapatra, originally published at The Times of India.

In a departure from tradition, the state government may not hold the annual Rath Yatra of Puri Jagannath temple in a grand manner this year, given the unprecedented crisis caused by the Covid-19 outbreak. According to the government’s plan, only a set of rituals related to Rath Yatra will be performed inside the temple without the participation of any devotees.

The world-famous Rath Yatra is scheduled to be celebrated on June 23, 2020. Jagannath temple’s chief administrator Krishan Kumar and Puri district collector Balwant Singh consulted Puri Shankaracharya Swami Nischalananda Saraswati at his Govardhan math on Thursday and sought his opinion whether chariot pulling exercise by the crowd can be stopped. The government officials also sought advice from the top seer whether Rath Yatra can be observed by only performing a set of rituals inside the temple.

“Guruji (the top seer) examined the religious scriptures and recommended that the celebration of Rath Yatra may be confined inside the shrine by following some rituals. Since lakhs of devotees wait outside the temple to watch Lord Jagannath, Balabhadra and Devi Subhadra on their giant iconic chariots, the traditional exercise of pulling of chariots may be stopped to contain the spread of Covid-19,” a senior functionary of Govardhan math said.

Neither any government official nor the Shankaracharya spoke to media after the meeting. The government is likely to announce its decision on Rath Yatra either on Friday and Saturday before the scheduled start of the construction of wooden chariots on the occasion of Akshaya Tritiya on Sunday. Timber used for the chariots already reached Puri.

“Guruji suggested that Debasnan Purnima, a key festival in the run-up to Rath Yatra can be performed where the deities will be brought from the sanctum sanctorum to snan mandap (bathing altar inside the temple) for a grand bath,” the math functionary said. While Lord Jagannath, Balabhadra and Subhadra take annual sojourn on chariots to Gundicha temple (birthplace) for nine days from the day of Rath Yatra, the deities this time are likely to spend the nine days inside the Jagannath temple.

Temple administration said there were instances of non-celebration of Rath Yatra in Puri long back, especially in the pre-Independence era. “Rath Yatra could not be observed several times between 15th and 18th centuries during attacks on the temple by Muslim rulers. The deities were shifted from the temple to safer places and kept hidden for months, causing disruptions in Rath Yatra,” the temple’s spokesperson Laxmidhar Pujapanda said.