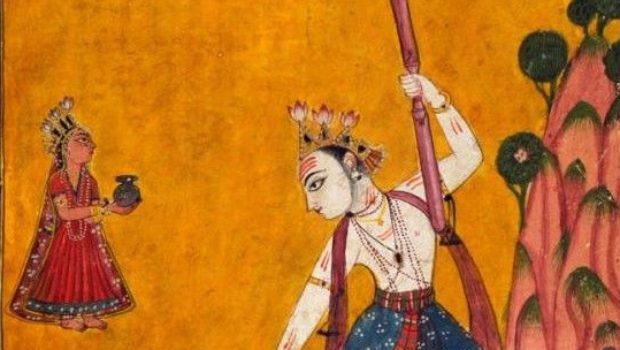 Some Gauḍīya Vaiṣṇavas posit the idea that Balarāma of Vraja has a śakti-tattva feature in Vraja, and her name is well-known: Anaṅga-mañjarī. She is the younger sister of Rādhā. But notably, Balarāma has no romantic relationship with her. Anaṅga-mañjarī is in love with Kṛṣṇa, not Balarāma. Furthermore, the idea that she is the śakti of Balarāma is not embraced by any of the Six Goswāmīs, Vṛndāvana dāsa Ṭhākura, Kavi-Karṇapūra, or Kṛṣṇadāsa Kavirāja. The idea that she is Rāma’s śakti comes from the late sixteenth-century text Anaṅga-mañjarī-sampuṭikā, which posits a number of theological ideas that appear to contradict themselves in some cases and, furthermore, are in concert with neither the siddhānta of the Goswāmīs nor that of the Śrīmad Bhāgavatam, nor are they supported by any known scripture. Such theological ideas, for example, include equating Balarāma and Nityānanda-rāma with Rādhā.34

However, if one nonetheless accepts that Anaṅga-mañjarī is the śakti of Rāma, leaving aside Anaṅga-mañjarī-sampuṭikā’s other, more questionable tenets, she must be considered one with Rāma only from the tattva perspective, for as śakti-tattva she would originate in Balarāma and only in this sense be nondifferent from him—as Rādhā is nondifferent from Kṛṣṇa. But Rādhā is at the same time different from Kṛṣṇa in her experience of bhāva, and thus her experience is not his. This difference is central to Gauḍīya Vaiṣṇavism. Indeed, Gaura līlā arises out of it. Similarly, Anaṅga-mañjarī conceived of as Balarāma’s śakti would also be different from Balarāma in bhāva, and it is bhāva, not tattva, that makes the līlā go round. Thus, of course, it is in our interest to stress the difference between Rāma and Anaṅga-mañjarī, if indeed one accepts that they are related as śaktimān and śakti to begin with.

In the climax of the Vraja līlā, Kṛṣṇa is driven to ponder and pursue Rādhā’s aesthetic rapture. There is no parallel to this between Balarāma and Anaṅga-mañjarī. Nor does Balarāma feel the necessity to experience Rādhā’s love for Kṛṣṇa from her vantage point, because he loves Kṛṣṇa from another vantage point, that of sakhya-rasa. Notably, a prominent tenet of Śrī Rūpa’s rasa-tattva is that each and every rasa is spiritually complete for each individual devotee. For that matter, how could Balarāma desire to experience Anaṅga-mañjarī’s romantic love for Rādhā and Kṛṣṇa and Anaṅga-mañjarī’s sambhoga with Kṛṣṇa, the latter in particular being unthinkable for anyone constituted of dāsya, sakhya, or vātsalya-rasa?35 Rāma has his own relationship with Kṛṣṇa in fraternal love, and the paternal aspect of his saṅkula-sakhya-rati provides the emotion through which he also relates with Rādhā.36 Furthermore, as we shall see later in this text, when one in sakhya-rasa is sympathetic to mādhurya-rasa, the rasa of romantic love serves as a subordinate influence to enhance one’s fraternal love, rather than manifesting a separate gopī identity. Thus, as Kṛṣṇa’s desire to experience Rādhā’s bhāva manifests, Balarāma, true to his own relationship with Kṛṣṇa, is there—if not ahead of the game—as his best friend to assist Kṛṣṇa in this extraordinary pursuit that gives rise to the extension of Kṛṣṇa līlā known as Gaura līlā. Unlike the Vraja līlā, where Balarāma’s participation in Kṛṣṇa’s romanticism is significant but limited and indirect, in Gaura līlā, Rāma plays a much more overt role in its dissemination.

In that līlā, Kṛṣṇa appears as Gaura, his dark complexion turned golden, his form wrapped in saffron cloth, a beggar in the marketplace of prema. Having witnessed the measure of Rādhā’s love for him, which exceeds his ability to reciprocate in kind, he offers himself in service to his gopīs’ love. He informs them that their saintly love is their own reward, a reward greater than anything in his own possession. And, to make up for his inability to reciprocate, he pledges to become a sādhu himself once in every day of Brahmā, and in doing so vows to dedicate himself to the pursuit and distribution of the gopīs’ ideal.37

34 See appendix 2 for a commentary on Anaṅga-mañjarī-sampuṭikā and how its theology has influenced the tradition.

35 Purāṇic stories describing Śiva’s unfulfilled desire to enter the rāsa-līlā or Pāṇḍava Arjuna’s desire to understand more about the gopīs seek to extol the glories of gopī-bhāva. They do not speak of a person already absorbed in the Vraja līlā in a particular transpsychological identity that by its very nature precludes a desire for romanticism with Kṛṣṇa.

37 See Sanātana Goswāmī’s explanation of Śrīmad Bhāgavatam 10.30.37 as it appears in Bṛhad-Bhāgavatāmṛta 2.7.138. Here, I have explained in brief the far-reaching implications of Sanātana Prabhu’s commentary.