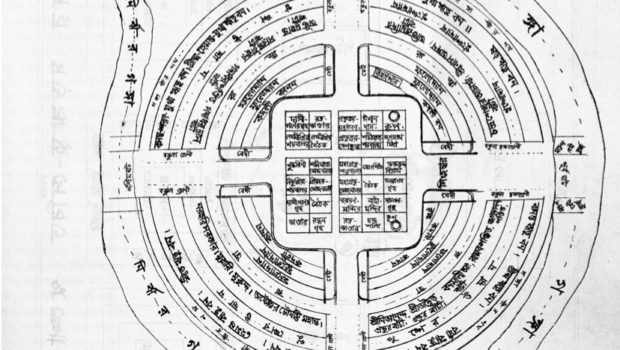 The Whys and Hows of a Nitya Navadvipa (Part 2)

The very first book of the Gaudiya sampradaya is Sri Brhad-bhagavatamrta. Therein, Sanatana Goswami states that each avatara has a corresponding representation in Vaikuntha.1 Since Gaura appears as an avatara (although himself being avatari Sri Krishna), he must have a permanent abode in transcendence. The word avatara is etymologically translated as “from up to down,” implying the idea of divine descent into a temporary realm, which is possible only if the avatara is already present in the spiritual world.2 Because Mahaprabhu is considered an avatara by the Goswamis, he must have his own abode in eternity.3 In this connection, Srila Jiva Goswami speaks about the eternality of Krishna, his associates, and his abode by describing Krishna as being worthy of worship—that is, an object of achievement4 —and by explaining that anything that is not eternal cannot be the goal of one’s worship, since one attains whom one worships.5 Again, our Goswamis accept Mahaprabhu as an object of worship, so he must have a permanent realm in eternity that corresponds with such worship.6

Still, some may persevere in their objection, asking why our Six Goswamis (having had the chance to do so) never spoke directly about Gaura in Vaikuntha, making luscious descriptions of an eternal Bengal in the spiritual sky. In reply, we should first of all consider that the Goswamis did not actually speak much about Mahaprabhu in general. They concentrated mainly on Radha-Krishna lila in such a way that the reader would feel an obvious necessity for a Gaura lila. We may then also ask why the Goswamis never spoke about other details, such as Gadadhara being Radha, or many other truths that were revealed in time by later (or even contemporary) authors.7 Actually, the Goswamis composed only a few verses in praise of Mahaprabhu, but almost none of them wrote about his lila (neither prakata nor aprakata).8 So if we follow the logic of abhava-pramana, then we should not believe in Mahaprabhu’s Earthly lila at all, because it was described in texts such as Caitanya-bhagavata or Caitanya-caritamrta, which were not written by any of the Six Goswamis.9 I think it is clear that such a proposal makes no sense at all.

In the face of these replies, some may still prefer to “make a choice” between someone such as Rupa Goswami and someone such as Visvanatha Cakravartipada and remain chaste to the former, who never wrote overtly about an aprakata nitya Navadvipa. But instead of forcing ourselves to choose between two equally divine personalities, we should learn how to accept both of them, understanding that there is ultimately no contradiction in the statements of the mahajanas. Although we may like to say “the Goswamis said it all” and take only whatever they said, the nature of revelation in the context of the parampara is something dynamic. Thus, a natural development of a sampradaya’s core foundational truths could (and should) take place in the form of its future members. That being said, the overall principle here is that since Krishna appears to different devotees in a suitable form that corresponds with their love for him, the same holds true for the qualities and lilas attached to that particular form—they correspond with a particular influence of bhakti, as the Bhagavata itself declares:

O Lord! You, who are approached by being heard about, seen and directly served, enter and remain in the lotus of your devotee’s hearts infused with bhakti. Much praised Lord! You are so merciful to your devotees that you manifest yourself in the particular eternal form of transcendence in which they always think of you, bestowing to them spiritual bodies appropriate to the mood they cultivate during sadhana. —Srimad-Bhagavatam 3.9.11

Even if we do not find any explicit verse about a nitya Navadvipa coming from the Goswamis,10 that does not mean there is no such realm. Again, Gaura is Krishna and there is an aprakata Krishna lila. Therefore, there is an aprakata Gaura lila. If someone would oppose this statement by considering it mere tarka (mundane logic), we could then say that tarka is one thing. But another very different thing is the enlightened logic that naturally comes from love (su-medhasah/sastra-nipuna),11 such as what the Goswamis exhibited, which caused them to see certain Bhagavata verses in light of Gaura lila. But if the objection still continues to the point of accepting the Goswamis’ between-the-lines reading but rejecting later mahajanas’ reading under the argument “the buck should stop somewhere,” we are then invited to re-think the very nature of the guru-parampara, which implies that later members will be as bona fide as the Goswamis precisely because they are able to read between the Goswamis’ lines, just as the Goswamis read between the Bhagavata’s lines to find Gaura there. To remain dynamic, ancient spiritual traditions are to be constantly updated by their members in the form of fresh revelations coming from the original siddhanta of their particular school of thought.12

Here, the same objection may take a new form, trying to distinguish between fresh revelations coming from the original siddhanta and the introduction of an entirely new sadhana not mentioned by the Goswamis. But the point here is that by speaking about an aprakata nitya Navadvipa, we are not promoting an entirely new sadhana. Rather, we are referring to the reality that is revealed as a byproduct of certain specific insights and that corresponds entirely with Vraja, so there is no need for a separate sadhana—as one goes deeper into Gaura lila, one will emerge in Krishna lila.13 And the opposite will be equally true as well, all of this supported by the Goswamis’ own words.14

On a similar note, we may find some objectors who say that Sri Jiva Goswami, the tattva-acarya of the Gaudiya sampradaya, never mentioned the possibility of an aprakata nitya Navadvipa in his profuse writings. In response to this claim, we can share the following verse from Sri Jiva’s Gopala-campu, wherein he speaks of Goloka as Svetadvipa:

The planet being described is called Goloka because it is the abode of cows and cowherds. It is called Svetadvipa because it manifests in a pure form which cannot be equaled by anything else. Its supreme position is accepted by persons with knowledge. That supreme Goloka is the supreme Svetadvipa. —Gopala-campu 1.1.22

Besides Thakura Bhaktivinoda (who directly interprets this verse in connection to an aprakata Navadvipa), we also find figures such as Vrndavana dasa Thakura supporting this statement by saying that Navadvipa is Svetadvipa,15 Svetadvipa being another name for Goloka and Vrndavana dasa’s text equating Navadvipa with Svetadvipa. Furthermore, the authoritative Gaura-ganoddesa-dipika says, “All glories to the most wonderful abode of Navadvipa, which those in full knowledge of rasa call Vrndavana, which people of knowledge call Goloka, which others call Svetadvipa, and still others call paravyoma, the spiritual sky.”16 Finally, Gopala-campu 1.1.19 speaks about aprakata Vrndavana as “having a variety of natures.” Since there are a variety of natures to Goloka (and since Vrndavana itself has innumerable natures), this realm is not necessarily limited in form to that of the description previously given by Sri Jiva.17

Read Part One, Part Two, and Part Three. To be continued.