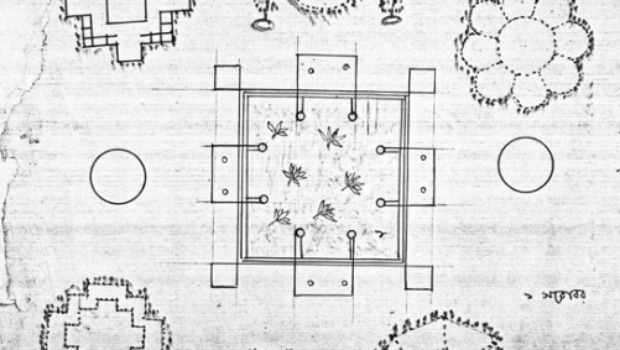 The Whys and Hows of a Nitya Navadvipa (Part 3)

Despite all the present evidence, someone may persist in their objection, saying again (since there is really no other possible argument to this topic) that if Mahaprabhu wanted an aprakata nitya Navadvipa to be preached about and embraced, he would have taught Rupa and Sanatana about it. But since his siksa to them is set in stone in Caitanya-caritamrta (2.19-25), wherein nothing is said about this goal, it does not matter if some other acaryas spoke about it in full detail, because there should be a theological hierarchy. Therefore, if the Goswamis did not speak about this possibility, then it cannot be plausible.

Although we have already answered this objection from many angles, we may add that a separate sadhana for an aprakata Gaura lila is not something that Mahaprabhu (nor the Goswamis) had to outline separately, as this was not considered necessary. The experience of it will be a natural byproduct of embracing the very same sadhana that was indeed outlined by both Gaura and the Goswamis, which in turn corresponds with a particular destiny in transcendence, both in Vraja and in Navadvipa. This becomes apparent in the well-known Gaura gayatri, which, as with any gayatri-mantra, includes a classical triple segmentation corresponding to sambandha (theory), abhidheya (practice), and prayojana (ultimate goal). Its last section invites its chanter to “be inspired by Gaura to perpetually worship him”—tan no gaurah pracodayat.1 Because Gaura lila is quite esoteric and confidential, it is no wonder that some of its intricate points were not overtly stated at the very beginning of the Gaudiya sampradaya.2 But they are still considerably evident if one has received the eyes to see them.

While a strong emphasis on the Goswamis’ books and position as sastric authorities is totally understandable (and necessary) for any Gaudiya Vaisnava, we should be careful not to, in the name of fidelity to them, easily dismiss universally accepted personalities, such as Gopala-guru Goswami, Dhyanacandra Goswami, and Visvanatha Cakravarti Thakura, or their writings, wherein they clearly speak about an aprakata Gaura lila. And even if the Goswamis do not overtly say that there is an ongoing Gaura lila in the spiritual domain,3 they do not overtly say that there is not such a lila either. In their unique writings, we find a unique sadhana that, when properly applied, will give us insights into the possibility of an aprakata Gaura lila, insights that many mahajanas have unanimously had and that do not go against the Goswamis’ teachings. We are not proposing ideas that contradict the Goswamis’ conclusions (such as the gaura-nagara-bhava doctrine).4 Rather, we are presenting a natural development of revelation coming from the application of truths that the Goswamis stated cryptically. An example of this is Caitanya-caritamrta, whose author speaks in full detail about a whole galaxy of theological and ontological points regarding Gaura and his lila that were not unpacked in such a way by the Goswamis.5

The Goswamis spoke primarily about Radha-Krishna, but they did so in such a way that the reader would look for a Gaura lila to make up for the “failure” of Krishna lila. Someone following in the footsteps of the Goswamis will eventually realize the necessity of an aprakata Gaura lila, as we have explained.6 If some Vaisnavas do not personally relate to this theological necessity, that does not speak of a lack of insight in bhajana on their part. Rather, it indicates particular bhakti-samskaras received in specific association, which will naturally emphasize certain aspects of the lila. From these bhakti-samskaras, unique realizations will come in a very specific way that they will naturally perceive as true, favorable, and ideal.7 Gaudiya Vedanta constitutes a spacious house in which the whole Vaisnava world can live, with rooms available for every nuance and difference that we can possibly think of in terms of bhava, as long as that bhava is expressed in the context of proper siddhanta.8 And if it is, this is to be celebrated by all, as these instances are a rare but valuable ornament in our worldwide devotional community.

There is no doubt that acaryas such as Jiva, Rupa, and Sanatana Goswamis are the final (and original) authorities to settle differing opinions in our Gaudiya sampradaya. What they have said is our ultimate siddhanta because they were directly linked with Sriman Mahaprabhu, the founder of our particular lineage. If we accept that Sri Caitanyadeva is the founder of our sampradaya, then we have to take the Goswamis’ opinion as paramount since they were personally trained by Mahaprabhu, who sent them to Vraja and specifically tasked them with writing the foundational books of our devotional school. The Goswamis are our supreme scriptural authority, and we should know how to deal with all of the possible implications of what they have said.

In this regard, we can give the example of the Vedas, which in their own way are also our supreme scriptural authority. In their abundant pages, we will find many truths that are not clearly explained but that are properly understood from the Puranas and Itihasas.9 Similarly, those truths that have not been clearly explained by the Goswamis (such as that of an aprakata Gaura lila)10 are to be understood from the writings of contemporary acaryas, such as Gopala-guru Goswami and Kavi-karnapura, or through later acaryas, such as Dhyanacandra Goswami, Visvanatha Cakravartipada, and others. Thus, when we say that Rupa, Sanatana, and Jiva constitute our topmost pramana as Gaudiya Vaisnavas, the idea is that anything that they say or that matches with what they say is totally acceptable, and anything that contradicts them is unacceptable. Following this line of thought, if previous acaryas have said that Gaura has an aprakata-lila, this should be accepted since it does not contradict the Goswamis’ conclusions. Furthermore, this concept is completely in line with the Goswamis’ writings in relation to other avataras and other topics mentioned in this series of articles.

Overall, the main objection to an aprakata Gaura lila is the idea of abhava-pramana, or the evidence that arises out of certain statements not being made by our original sastra-gurus. But as we have shown, by following this logic, we are then forced to reject all of Mahaprabhu’s prakata-lila as well (since the Goswamis hardly wrote about it). By doing so, we would actually be incurring the fault known as avyapti-dosa, or the underextension of a given definition whereby plausible possibilities that should be allowed are thoroughly excluded.11 Instead of taking this risky stance regarding the Infinite, we are advised to align ourselves with what we may call aviruddha-pramana, or evidence that may not have been directly presented by the Goswamis but that nonetheless is “not incompatible” (aviruddha), or actually “consistent with,” their teachings.

But even beyond logical inference and sastric interpretation, the strongest argument for a nitya Navadvipa in eternity lies deep within the psychic domain of Bhagavan Sri Krishna himself and the main inner experience he realizes in his eternal form of Sri Gauranga—Radha bhava. Although we find unlimited devotees in Vraja possessed of the topmost affection, Sri Krishna became exclusively obsessed with fathoming the greatness of the foremost of them, Sri Radha. But since the glories and reach of her prema are unending and always expanding, it cannot be said that Krishna was fully capable of fathoming it, even after becoming Gaura.12 So in this particular descent as Sriman Mahaprabhu (who, although more successful than Krishna in grasping Radha’s glories, still could not trace the ultimate limits to Srimati Radharani’s ever-increasing love), Bhagavan himself gauges and relishes it forever in eternity, in a corresponding abode that allows for such an apotheosis—nitya Navadvipa.Thus according to the presented evidence, we must positively conclude about the eternality of Gaura lila in the spiritual realm, a unique attainment that will duly manifest in the hearts of those practitioners who engage in sadhana here with a view to serve Sriman Mahaprabhu there in an aprakatanitya Navadvipa,13 the lotus inside the lotus of Sri Goloka Dhama.