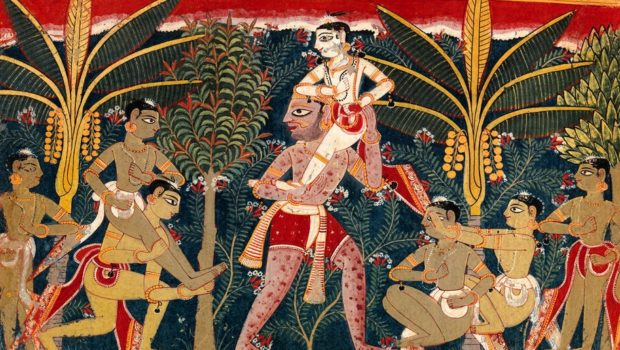 When Kṛṣṇa returned to Rāma and the greater circle of cowherds, he who was the abode of happiness—sukha-nidhi—sat comfortably in sukhāsana beneath the large wish-fulfilling banyan tree after which the forest—Bhāṇḍīravana—was named. As Hari sat casually, Śrīdāma and Sudāma engaged their followers in decorating their beloved friend with forest flowers. Some boys picked flowers; some strung them into garlands; others made flower earrings, armlets, and flower anklets. Expert in the art of decoration, some boys made other unique forest ornaments as Sudāma-sakhā personally decorated Kṛṣṇa under the admiring eye of Balarāma.

However, observing such adoration, Madhumaṅgala objected that in the presence of a brāhmaṇa like himself among mere cowherds, such worshipful attention should have been directed to him, insisting that he now be decorated better than Hari. Sudāma, smiling within, reverently agreed and turned his attention to Madhu. He brought the dvija-rāja to a separate grove and began to ornament him, making him look like a clown at best, unbeknown to the brāhmaṇa boy himself. Anxious as the ornamentation had been completed, Madhu asked how his appearance compared to that of Hari, and Sudāma assured him his handsomeness exceeded that of Nanda’s son. Delighted, he walked hand in hand with Sudāma into the midst of the gopas, who surrounded him dancing, hooting, howling, and laughing at him. Perplexed at their reaction, he did not know what to make of it until he saw his reflection in the clear water of the Yamunā. Outraged, he chased Sudāma, who ran and hid behind Kṛṣṇa.

Sudāma taunted Madhumaṅgala: “Ah! Such a beautiful result you have attained for your misdeeds!” And Madhu in turn vowed to make Sudāma look like he had made him look. In this way, they exchanged insults and boasted until a wrestling match broke out. Arms and legs flying, bodies rolling in the dust amid cries of anguish and victory alike from both sides, finally, pudgy Madhumaṅgala had enough and broke loose, taking shelter behind Hari. Despite his apparent defeat, he reasoned otherwise to his own satisfaction, preserving his self-dignity, proclaiming his prowess and protesting that brāhmaṇas like himself should be protected by King Nanda’s son from such unruly cowherds, who owing to their vaiśya temperament were prone to cheating. Thus, Kṛṣṇa promised to protect him and challenged Sudāma himself, taking the excitement to another level. Then Śrīdāma stepped forward and asserted that given Sudāma’s exhaustion, and to make it a fair fight, he should take Sudāma’s place, turning the bout into one between two teams, as Sudāma then tagged Śrīdāma and Madhumaṅgala let go of Kṛṣṇa’s hand.

The assembly of cowherds quickly took sides, rooting for either Kṛṣṇa or Śrīdāma. Seeing their enthusiasm for the match, Kṛṣṇa suggested that action speaks louder than words and challenged each boy on either side to join the match themselves, facing off with one another. Then Kṛṣṇa announced that those who lost would be bound to carry their victors on their shoulders. He then elected himself as the leader of one side and Rāma as the leader of the other. Rising to the occasion without a second thought, the boys paired off in the game of hariṇākrīḍanaṁ:

They then played the childhood game known as hariṇākrīḍanaṁ, in which each boy paired off with an opponent and all the boys simultaneously attacked their respective rivals.

With the help of the large limbs of the great banyan, the winners would be assisted in mounting the shoulders of the losers. Bhāṇḍīra would also further assist their play by providing shade from the summer sun. The Hari-vaṁśa Purāṇa describes it thus:

It was so large as to appear like a mountain covering half the sky. Many varieties of birds of blue and various other colors frequented that great tree, whose profuse foliage made it appear like a cloud accompanied by a rainbow, or like a house decoratively overgrown with vines and flowers. It spread its broad roots downward and carried upon itself the sanctified clouds above. That banyan tree was like the lordly master of all other trees in the vicinity, as it performed the auspicious service of warding off the rain and the heat of the sun. Such was the appearance of that banyan tree, which seemed just like the peak of a great mountain.

However, amid all of this mādhurya, Kṛṣṇa’s aiśvarya-śakti gave rise to his omniscience, and thus she was partially involved in his suggestion that two sides should be formed and the winners rewarded by the privilege of making their opponents their palanquins. How so? Among the boys and disguised as one of them lurked Kaṁsa’s henchman Pralamba, intent on doing his master’s dirty work. Calling Rāma to his side, Kṛṣṇa pointed him out to his brother.

Earlier in the text of the Bhāgavata, Śukadeva points out that Pralamba, among others, was a formidable foe of the Yadu dynasty, with whom Balarāma was directly connected, being the son of Vasudeva. Thus, Kṛṣṇa desired to honor Rāma and make him famous for vanquishing Pralamba. While the boys chose sides and matched themselves with one another, Pralamba, disguised as a cowherd, was not sure which side to affiliate himself with and whom to face off with, being socially awkward as an unknown among friends. However, he was able to understand how affectionate Balarāma was toward Kṛṣṇa and also that Kṛṣṇa was a worthy opponent. Thus, he reasoned it best to first kill Rāma, whom he considered to be the weaker of the two brothers, and in doing so weaken Kṛṣṇa’s resolve and then kill him as well. Understanding his mind and desiring to broadcast Rāma’s glories, Kṛṣṇa quickly chose him to be on his side and matched him against he whom Pralamba considered merely “the son of Rohiṇī,” lacking the prowess of Yaśodā’s son, Kṛṣṇa. Śyāma then matched himself against Śrīdāma.

When Rāma’s side won, Kṛṣṇa carried Śrīdāma, and Rāma mounted the shoulders of Pralamba. However, while the game involved carrying one’s victor back to the great banyan tree, Pralamba ran in the opposite direction, clinging to Rāma, whom he carried on his shoulders. Again, he thought that although Kṛṣṇa was powerful, Rāma was not, but as Rāma was an object of Kṛṣṇa’s affection, Kṛṣṇa would protect him if he tried to kill Rāma in Kṛṣṇa’s presence. But if he killed the weaker Balarāma in the absence of Kṛṣṇa, he would be successful in both killing Balarāma and emotionally devastating Kṛṣṇa. Meanwhile, Kṛṣṇa once again sought to set the record straight as to his older brother’s prowess—as to the equality of the twins—by allowing Rāma to slay this foremost among the demons—dānava-puṅgavaḥ.

Despite the fact that Kṛṣṇa had informed Balarāma that Pralamba was a demon in disguise, Rāma so absorbed himself in the competition that he treated Pralamba in terms of his cowherd dress—as a cowherd friend. However, Pralamba began to struggle with the weight of Balarāma as he ran away with him on his shoulders. While any cowherd boy of Vraja could carry Balarāma on the strength of his love for him, a demon like Pralamba could not bear the weight of who Rāma actually was. Thus Pralamba quickly tired, and in an effort to compensate for the gravity of the situation he now found himself in, he expanded his form, his cowherd dress falling to the ground, his actual appearance manifesting. In Vraja, there is only beauty. Thus, even the dark demoniac form of Pralamba clad in gold armor appeared beautiful like a dark cloud casting lightning while carrying the moon. At first, Balarāma appeared concerned, as his mādhurya and aiśvarya vacillated between one another, producing a mixture of feelings. However, his concern was never for his own safety but rather in consideration that perhaps there were other demons in cowherd dress and that he should be among the cowherds to protect Kṛṣṇa. Balarāma was also prepared to kill Pralamba only after he had shed his cowherd dress. His concern thus coincided with the revelation of Pralamba’s true identity, and thus Balarāma dispensed with him and returned to the cowherd assembly at the base of the banyan, where Kṛṣṇa had arrived out of breath from carrying Śrīdāma on his shoulders. Śrīdāma’s love was indeed quite heavy and deep to have expressed itself in this way to the amazement of Śukamuni, as expressed in the text of the Bhāgavata.1

Śukadeva describes Balarāma in his kīrtana narrative as bala-śālinā, “he who has special powers,” or more specifically in relation to Rāma’s mood in this particular līlā, “he who has the quality of praising Kṛṣṇa’s strength.” In other words, Balarāma felt, “I have killed this demon because of the power Kṛṣṇa has blessed me with.” And understanding Rāma’s love for Kṛṣṇa, the other sakhās were awed by Rāma’s sakhya-rati. They celebrated his triumph and praised him—“sādhu sādhu”—while also expressing their amazement at how Pralamba had disguised himself as one of them. The phenomenon of demons in the dress of devotees never ceases to amaze the devoted.

Then the assembly of cowherds, steeped in the prema of preyo-bhakti, surrounded and profusely blessed Balarāma—āśiṣo ’bhigṛṇantas taṁ—“May you play affectionately forever with your younger brother in Vraja and in so doing protect us as well,” while Rāma himself deferred to Kṛṣṇa. Jaya Rāma! Jaya Kṛṣṇa! Jaya Gopavṛndapāla!

1 “O king! Śukadeva cries out in astonishment at how the Lord is controlled by his devotees.” Vaiṣṇava-toṣaṇī commentary of Sanātana Goswāmī on Śrīmad Bhāgavatam 10.18.23.