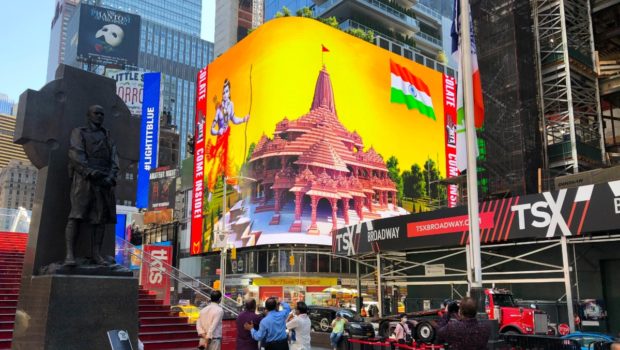 The ancient Sanskrit poem Ramayana, one of the most important texts of [Hinduism], tells the life story of Rama, considered to be the seventh human avatar of the Hindu god Vishnu, the supreme being and “controller of the universe.” According to the poem, Rama was born in Ayodhya, along the banks of the Sarayu River, and to devotees, his birthplace is a holy site, referred to as Ram Janmabhoomi.

Tensions over the site started in the 1500s: King Babur, the founder of the Islamic Mughal Empire, ordered one of his generals to construct a mosque in Ayodhya, to be known as Babri Masjid (“Babur’s mosque”). The mosque was built on a hill known as “Rama’s fort,” and according to nationalist Hindus, a shrine to Rama at the site was demolished to make way for it. While a 2003 archaeological survey backed this theory, other scholars have found it to be dubious. Among Hindu supremacists, the narrative is clear: A Muslim religious site encroached upon a Hindu holy place and destroyed sacred artifacts while doing so.

The Mughal era, which lasted from the 16th through the 19th centuries and saw years of sweeping, mostly peaceful Muslim rule (and, among many, many other things, included the building of the Taj Mahal), is a long-standing, festering sore for Hindutva followers who believe India to be an inherently Hindu nation. And ever since Hindu nationalism established its startlingly durable structures and intellectual justifications in the early 20th century, while India was still under British rule, Mughal history has been one of its favorite targets. These nationalists argue that the Babri Masjid is a violent monument to Hindu suppression.

All of this tragically blew up in 1992, when members of far-right Hindu organizations—including the current governing Bharatiya Janata Party—organized a rally at the mosque that quickly turned violent, culminating in the destruction of the building. Immediately after, riots between Hindus and Muslims erupted all across the country, leaving about 2,000 dead. The effects spread to Pakistan and Bangladesh, where the Hindu minorities of those nations were attacked in retaliation.

As prominent Indian Muslim journalist Rana Ayyub told my colleague Mary Harris last year, the aftermath of the mosque’s destruction set off a major change for the personal lives of many of India’s Muslims. Even though Muslims had long faced discrimination and mistreatment within the country, now even communities that had been accepting turned their backs. The mosque’s destruction happened at a crucial turning point for Indian politics, as the country transitioned to a free market economy and saw the increasing rise of the Bharatiya Janata Party, which finally found nationwide acceptance with the election of Prime Minister Atal Bihari Vajpayee in the late ’90s.

The plans for the Ram Mandir had been unofficially in the works since the 1980s but long-delayed by legal challenges. In 2019, India’s Supreme Court controversially ruled in favor of setting aside the Babri Masjid’s original land for the construction of a temple devoted to Rama, and separate, faraway land being set aside for Muslims. Since then, construction has been swift, undertaken by the high-caste Sampura family and funded by a trust established by the Indian government. Despite delays due to the pandemic as well as clashes with China, the temple is ready to be consecrated on Wednesday, [August 5, 2020,] with the blessings of some of India’s most powerful.

This brings us to Times Square and the efforts of Indian American and Hindu American groups to bankroll ads there, displaying images of Rama and the temple on the day of its opening. Opponents of the billboards have sent letters to New York City Mayor Bill de Blasio as well as to other elected officials to request that this not take place. It was after hearing from these that  Branded Cities decided not to display these images and publicly condemned bigoted advertising—a major, surprising victory for members of the Indian diaspora opposed to the Modi regime. These groups are now racing to try to get Disney and Clear Channel Outdoor to follow suit before [August 5, 2020.

This article was originally published at Slate., and is partially reproduced here without the permission of the author, who is not affiliated with this website or its views.