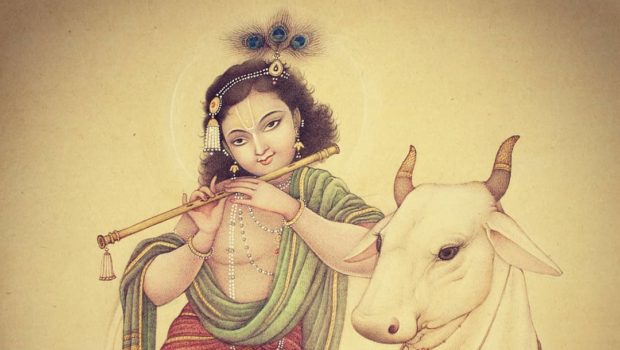 The Birth and Life of the Unborn

Mathematician and former NASA scientist N. S. Rajaram’s Search for the Historical Krishna, while laboring hard to establish the historicity of Krishna, leaves us with a different Krishna from the miraculous one that is the central figure of the Bhagavata Purana residing in the hearts and meditative minds of his devotees. Attempts to objectify the life of Krishna in an effort to make him “real” derive partially from the need of the faithful, whose faith is fostered at least for some time by locating the super-subjective meditative reality within the objective material world. Although the spiritual practitioner seeks to enter the meditative super-subjective world, he or she remains for some time largely identified with the objective physical world. In other words, such practitioners’ default for determining the “real” is tied to their identification with the objective physical world, even while the teaching is that the meditative super-subjective world with its scriptural parameters is the real world and the objective material world is illusory—here today and gone by nightfall. There is a real objective physical and psychic world, but it is not what it appears to be.

The novice’s need to objectively verify the historicity of Krishna in every detail with which he is described in the sacred narratives is problematic, to be sure. Indeed, if this materially conditioned necessity is not transcended, it ends up distorting the very text in which such sacred narratives are found, turning them into something they are not. Texts such as the Bhagavata Purana are not objective history, psychology, or science books in any modern sense, even while they tell a sacred history, address yogic psychology, describe the methodology or science of spiritual practice, and describe the nature of consciousness and matter with an emphasis on the former.

The Bhagavata teaches that not everyone who saw Krishna with his or her eyes saw him for who he is. For he is only truly seen with eyes of devotion. And eyes of devotion lend to descriptions of that which is ineffable or that about which not enough can be said. The experience of the authors of the sacred narratives is such that if one were to take all the world’s oceans and turn them into ink, all the world’s landmass and turn it into paper, and assign all the world’s human population with the task of describing Krishna, they could not do justice to any particular aspect of his life, appearance, qualities, or lilas. Such is the testimony of the learned devotees.

Sacred narratives are poetic yet theologically and philosophically profound. The Bhagavata is the best example of such literature, centered as it is on the divine play of the sweet Absolute. Other than the Bhagavad-gita, which the Bhagavata is arguably the theological sequel to, no sacred narrative of the East has been circulated more widely or translated into as many dialects. It enjoys more than eighty learned Sanskrit commentaries, and its narrative of Krishna lila has been depicted in art, drama, and music from ancient times to our modern times. It is arguably the richest sacred book the world over in language, philosophy, and theology. Unlike any other sacred text, it walks a tightrope between the majesty and intimacy of the Absolute. Its story: “The life story and love life of Reality the Beautiful—Krishna the heart of the Godhead.” The text is said to be written in the language of meditative trance, and only couched in Sanskrit. It is with eyes closed to the world of material exploitation and the inner eye fixed in devotional meditation that one sees Krishna as he is, more real than any mundane historical figure will ever be.

While we have considerable poetic textual evidence for Krishna’s earthly advent, we have no accepted archeological or other reliable historical evidence for his pastoral lilas. Yet it is these very humanlike lilas that stir the hearts of millions of devotees—these narratives are by far the most popular. And for good reason. Krishna’s humanlike lilas resonate with our humanity. Like no other descriptions of God, they serve to foster a bond with our human condition, our human psychology, in a manner that makes Krishna seem like one of us in all his divinity. Given the nature of the Deity, this bond in turn enables humanity to ascend beyond its own limits. Thus, the oxymoron of divine humanism becomes more than a figure of speech in the person of Krishna.

Krishna’s pastoral lila tells us that he who is all-powerful only plays, with nothing to accomplish. The Sanskrit word lila means “divine play,” and it only fully applies to Krishna. Krishna is the all-playful, and this in turn implies that he is all­-powerful among all the Hindu divinities. What must be the power of one who has nothing to accomplish, who plays unconstrained by time and without any negative repercussions? What is the power of anything else compared with the charm and beauty by which Krishna rules? Such must be the nature of the perfect object of wise love in intimacy and such is the experience of the devotees of Krishna.

The fact that religions through the ages have spoken in images, parables, and paradoxes means simply that there are no other ways of grasping the reality to which they refer. But that does not mean that it is not a genuine reality.

One Response to The Birth and Life of the Unborn