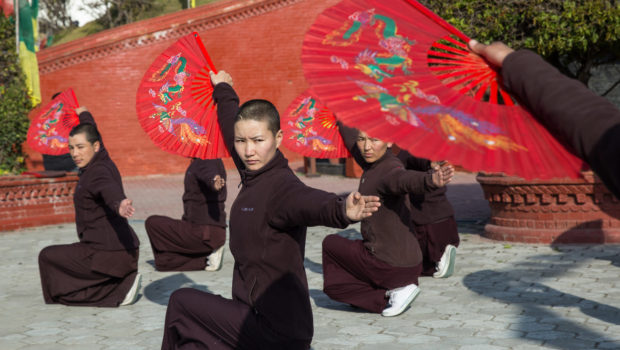 The Kung Fu Nuns Of Kathmandu

Jigme Yeshe Lhamo squats in a powerful kung fu stance. As she raises her 18-inch sword, it flashes in the sunlight against the backdrop of the Himalayas. It’s a crisp January morning at Amitabha Drukpa Nunnery in Kathmandu Valley, home to more than 800 Himalayan Buddhist nuns ranging in age from 6 to 80.

Sporting maroon-colored robes and shaved heads, the sisters cartwheel, punch, kick and land in splits. They wield spears and dance in formation with paper fans. Lhamo, 31, says practicing the martial art has given her confidence.

When she was 12, Lhamo nearly drowned when she fell over the guard rail of a bridge and plunged into the freezing cold river below. She had to undergo surgery for multiple fractures in her right leg, an injury that disqualified her from pursuing her dream of joining the Indian army.

“Becoming an Indian officer was everything to me. I was very sad and depressed and crying all of the time and I stopped eating.” says Lhamo.

Lhamo’s depression only started to lift a few years later when she met Jigme Pema Wangchen. He’s the the head of a 1,000-year-old Buddhist sect called the Drukpa — which means a person from Bhutan or of Bhutanese descent. He’s known as the Gyalwang Drukpa.

Jigme Pema Wangchen — regarded as the twelfth incarnation of the Gyalwang Drukpa — works to promote gender equality by establishing schools, medical clinics and meditation centers throughout the Himalayas. He traveled to Lhamo’s village in Ladakh, India, in 2005 to hold a series of empowerment workshops for women.

“He encouraged me to take charge of my life and pursue opportunities that are not usually afforded to women in this part of the world,” says Lhamo.

Lhamo says it was through the teachings of the Gyalwang Drukpa that she was able to gain confidence in herself and pursue her dream of helping others. It was also the moment that she decided to become a nun.

Her parents called the idea crazy. “They were so mad. They told me that I didn’t know anything about Buddhism and that I was too young to make such a choice and that I had to continue my studies to become an engineer or a doctor,” says Lhamo, who ended up running away from home at the age of 16. “My mother and father wouldn’t allow me to go so I got on a bus and traveled to Nepal. It was scary but I knew I needed to go.”

Lhamo arrived at the Druk Amitabaha Mountain nunnery just outside of Kathmandu and started her new life with a new first name. All of the Drukpa nuns are known as Jigme, which means “fearless one.”

For centuries, women in the Himalayas who sought to practice spirituality equally with men have risked being ostracized. They are forbidden from leading prayers, singing or being fully ordained. Tasked with the chores of cooking and cleaning, nuns are told if they’re “well behaved” they can come back in their next lifetime as monks — and only then can they become enlightened.

About ten years ago, the Gyalwang Drukpa set out to change that. Inspired by his mother, who worked to break down gender stereotypes, he put the nuns in leadership roles. He encouraged the nuns to take part in religious rituals traditionally reserved for their male counterparts and gave them the highest level of teachings, called Mahamudra. Monks in his sect then had to ingratiate themselves to the nuns (or more accurately, formally request the teachings from the nuns). This shifted the power dynamic.

“Monks within the Drukpa lineage celebrate what the nuns do,” says Carrie Lee, former president of Live to Love International, a non-governmental organization that has partnered with the nunnery for nearly 20 years. “However, monks from other sects believe that if a woman touches something it’s considered tainted and they have to throw it away, so [the nuns’] work is still not widely accepted.”

Drukpa’s efforts to break down patriarchal traditions have sparked intense backlash from the more conservative Buddhist sects in the Himalayas.

“They received threats almost on a daily basis. Some threatened to burn down their nunnery and their temple. Many consider them blasphemists, which in this community is a very big deal. But most of all they were harassed physically,” says Lee.

Instead of backing down, the Gyalwang Drukpa decided to instill even more confidence in the nuns. At his suggestion, starting in 2010, they began to study kung fu, the ancient Chinese martial arts practice that was off-limits to women in Nepal for more than two centuries.

The training is intense.

But first there is a lengthy spiritual preparation. The nuns wake up each morning at 3 a.m. and meditate for two hours, followed by a larger communal prayer service in the nunnery’s main temple. They sit cross-legged in pews, singing and chanting from Buddhist prayer books. The smell of saffron-infused Himalayan incense fills the brightly colored temple as they beat on drums, sound horns and ring bells.

After their morning prayers, or “puja,” it’s time to warm-up.

Each kung fu session starts and ends with running laps around the nunnery’s statue garden. The nuns then run up about 200 steps to the top of the garden and climb back down “army crawl” style.”

After that, the nuns break up into groups and start practicing various forms of kung fu. Jigme Yangchen Ghamo, 25, who has lived at the nunnery since she was 10, says she’s proud to be part of something that hasn’t been done before.

“We are the only nuns in the Himalayas who practice kung fu,” says Ghamo, who notes that it has boosted her physical strength and endurance and sharpened her ability to meditate and focus. “It’s given me the self-confidence that I didn’t have while growing up.”

This article was originally published by NPR, and is reproduced here without the permission of the author, who is not affiliated with this website or its views.