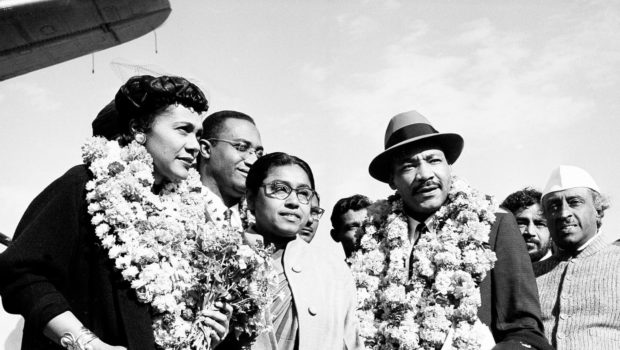 By Isabel Wilkerson, originally published at The Guardian.

In the winter of 1959, after leading the Montgomery bus boycott that arose from the arrest of Rosa Parks and before the trials and triumphs to come, Martin Luther King Jr and his wife, Coretta, landed in India, at Palam Airport in New Delhi​, to visit the land of Mohandas K Gandhi, the father of nonviolent protest. They were covered in garlands upon arrival, and King told reporters: “To other countries, I may go as a tourist, but to India, I come as a pilgrim.”

He had long dreamed of going to India, and they stayed an entire month. King wanted to see for himself the place whose fight for freedom from British rule had inspired his fight for justice in America. He wanted to see the so-called “untouchables”, the lowest caste in the ancient Indian caste system, whom he had read about and had sympathy for, but who had still been left behind after India gained its independence the decade before.

He discovered that people in India had been following the trials of his own oppressed people in the US, and knew of the bus boycott he had led. Wherever he went, the people on the streets of Bombay and Delhi crowded around him for an autograph. At one point in their trip, King and his wife journeyed to the southern tip of the country, to the city of Trivandrum in the state of Kerala, and visited with high-school students whose families had been untouchables. The principal made the introduction.

“Young people,” he said, “I would like to present to you a fellow untouchable from the United States of America.”

King was floored. He had not expected that term to be applied to him. He was, in fact, put off by it at first. He had flown in from another continent and had dined with the prime minister. He did not see the connection, did not see what the Indian caste system had to do directly with him, did not immediately see why the lowest-caste people in India would view him, an American Negro and a distinguished visitor, as low-caste like themselves, see him as one of them. “For a moment,” he later recalled, “I was a bit shocked and peeved that I would be referred to as an untouchable.”

Then he began to think about the reality of the lives of the people he was fighting for – 20 million people, consigned to the lowest rank in the US for centuries, “still smothering in an airtight cage of poverty,” quarantined in isolated ghettoes, exiled in their own country.

And he said to himself: “Yes, I am an untouchable, and every negro in the United States of America is an untouchable.” At that moment, he realized that the land of the free had imposed a caste system, not unlike the caste system of India, and that he had lived under that system all of his life. It was what lay beneath the forces he was fighting in the US.

What Martin Luther King Jr, recognized about his country that day had begun long before the ancestors of our ancestors had taken their first breaths. More than a century and a half before the American Revolution, a human hierarchy had evolved on the contested soil of what would become the United States – a concept of birthright, the temptation of entitled expansion that would set in motion what has been called the world’s oldest democracy and, with it, a ranking of human value and usage.

It would twist the minds of men, as greed and self-reverence eclipsed human conscience and allowed the conquering men to take land and human bodies that they convinced themselves they had a right to. If they were to convert this wilderness and civilize it to their liking, they decided, they would need to conquer, enslave or remove the people already on it, and transport those they deemed lesser beings in order to tame and work the land to extract the wealth that lay in the rich soil and shorelines.

To justify their plans, they took pre-existing notions of their own centrality, reinforced by their self-interested interpretation of the Bible, and created a hierarchy of who could do what, who could own what, who was on top and who was on the bottom and who was in between. There emerged a ladder of humanity, global in nature, as the upper-rung people would descend from Europe, with rungs inside that designation – the English Protestants at the very top, as their guns and resources would ultimately prevail in the bloody fight for North America. Everyone else would rank in descending order, on the basis of their proximity to those deemed most superior. The ranking would continue downward until one arrived at the very bottom: African captives transported in order to build the New World and to serve the victors for all their days, one generation after the next, for 12 generations.

There developed a caste system, based upon what people looked like – an internalized ranking, unspoken, unnamed, and unacknowledged by everyday citizens even as they go about their lives adhering to it and acting upon it subconsciously, to this day. Just as the studs and joists and beams that form the infrastructure of a building are not visible to those who live in it, so it is with caste. Its very invisibility is what gives it power and longevity. And though it may move in and out of consciousness, though it may flare and reassert itself in times of upheaval and recede in times of relative calm, it is an ever-present through-line in the country’s operation.