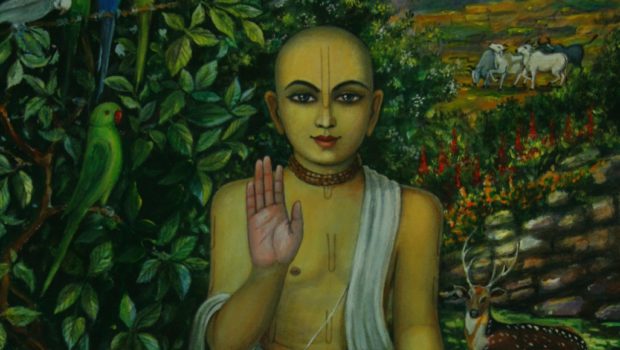 A word has a meaning, and often it may even many meanings. If we want to understand the meaning of a sentence, we need to know the exact meaning of the words as intended by the speaker or author. Meanings change with time. For those on the path of bhakti, it is important to clearly grasp what bhakti really means. Śrī Jīva Gosvāmī gives the definition of bhakti in Anuccheda 216.3 of Bhakti Sandarbha, which I am producing below along with my commentary.

I shall now describe bhakti to Bhagavān Viṣṇu, by which all things are attained. Bhagavān Hari is not as pleased by anything else as he is by bhakti.

[Bhakti’s svarūpa-lakṣaṇa is next defined with reference to its etymological root, bhaj.]

The verbal root bhaj is widely acknowledged to mean ‘the offering of service’ (sevā). Therefore, bhakti, which is the preeminent means to attain the Absolute (sādhana), is proclaimed by the wise as ‘sacred service’ (sevā).

In the first of these two verses, the statement that all things are attained by bhakti (yayā sarvam avāpyate) is an extrinsic characteristic of devotion (taṭastha-lakṣaṇa). That everything is attainable by devotion is evident from statements such as this:

A person of evolved discernment, whether desireless, full of desire, or seeking liberation, should worship the Supreme Puruṣa with resolute bhakti-yoga.

On the basis of this statement, the extrinsic definition of bhakti is shown to be free from the defect of being too narrow (avyāpti) [because there is no attainment—meaning no effect—that is excluded from bhakti’s scope].

The second line of the first verse from Garuḍa Purāṇa (227.1) states that Bhagavān is pleased only by bhakti and not by anything else. By this, the extrinsic definition of bhakti is shown to be free from the defect of being too broad (ativyāpti) [since it thereby excludes all other practices as incapable of yielding the same result]. Furthermore, by saying in the second verse that this conclusion is corroborated by the wise [i.e., by the direct experience of realized souls (vidvad-anubhava-pramāṇa)], the definition is established as free from the defect of infeasibility (asambhava) [since their direct experience stands as proof that bhakti does indeed yield such results].

The intrinsic characteristic of bhakti (svarūpa-lakṣaṇa) is referred to by the word sevā, or “sacred service”, and this service involves threefold loving attendance upon (anugati), or responsiveness to, Bhagavān, being enacted through the faculties of body, speech, and mind. Therefore, this definition excludes all service performed out of fear and enmity as well as the worship of oneself as Supreme (ahaṁgrahopāsanā). The adjectival compound sādhana-bhūyasī, lit., “the outstanding practice,” qualifying the word bhakti, means that bhakti is preeminent (śreṣṭha) among all the various means to attain the Absolute (sādhana).

The extrinsic and intrinsic characteristics of bhakti are spoken of in another manner by sage Kavi:

All those methods indeed that were spoken of by Bhagavān as the means by which unenlightened humanity can easily attain immediate realization of the Self, you should know to be bhāgavata-dharma.

The words aviduṣāṁ puṁsām, “of unenlightened humanity,” refer to those who are unaware of the glory of Bhagavān. The implication is that the methods spoken of by Bhagavān easily result in the immediate realization of the Self even when performed by such people. The word ātmanaḥ [in the compound word ātma-labdhaye], “of the Self,” referring to the distinct disclosure (avirbhāva) of the Supreme Self either as Brahman, Paramātmā, orBhagavān, is taken in the sense of the accusative case (karma) [i.e., as the direct object of the act of attaining]. The methods (upāyāḥ), or in other words, the sādhanas, that are meant for attaining the Self (ātma-labdhaye, i.e., ātma-lābhāya) without any difficulty (añjaḥ, i.e., anāyāsenaiva)  have been spoken of by Bhagavān himself. That Kṛṣṇa himself spoke this knowledge is affirmed in verses such as the following:

In due course of time, this speech of Mine, known as the Veda, remained undisclosed during the period of dissolution. In it, the dharma that is entailed is constituted of the very essence of My being (mad-ātmakaḥ). It was spoken by Me once again to Brahmā, at the beginning of a new creative cycle.

In the verse under discussion [SB 11.2.34], sage Kavi says: “Know those methods (tān upāyān) [i.e., the same methods that constitute the mad-ātmaka-dharma spoken of by Kṛṣṇa in SB 11.14.3] as bhāgavata-dharma, or the dharma that pertains directly to the essential nature of Bhagavān.” The indeclinable hi, “indeed,” [highlighting the methods (upāyāḥ)] implies that these methods are well-known as bhāgavata-dharma [both in Śruti and Smṛti]. Direct devotion (sākṣāt-bhakti) is also called bhāgavata-dharma, because the word parama-dharma [a synonym of bhāgavata-dharma] is used to describe sākṣāt-bhakti in this verse:

In this world, this alone is asserted to be the supreme essential duty (para-dharma) of humanity, namely, to engage in bhakti-yoga to Bhagavān by uttering His names and other such direct acts of devotion.

Returning again to the verse under discussion [SB 11.2.34], the words, “spoken for the purpose of attaining the Self” (ātma-labdhaye proktā), refer to bhakti’s extrinsic definition (taṭastha-lakṣaṇa) [because such attainment is an effect of bhakti]. And because the Self [i.e., Bhagavān] cannot be attained by any other means, this definition is without flaw (avyabhicāri) [meaning that it is free from the defects of being too narrow or too broad]. The word upāyāḥ, “the methods,” which are meant for the attainment of the Self (ātma-labdhaye), refers to bhakti’s intrinsic characteristic (svarūpa-lakṣaṇa) [because these methods, such as śravaṇa and kīrtana, constitute the essential nature of bhakti]. The methods (upāyāḥ) to attain Bhagavān are indeed nothing other than loving attendance upon him (tad-anugati) [identified earlier in this anuccheda with the word sevā, or “sacred service,” which constitutes the svarūpa-lakṣaṇa of bhakti].

To procure an object, one must first become acquainted with its distinguishing characteristics. Every object has numerous attributes. Some of them are general (sādhāraṇa), meaning that they are common to other objects as well, whereas other attributes are unique to the object in question (asādhāraṇa), meaning that they are not found in any other object belonging either to the same class or to a different one.

For example, a cow has four legs, two ears, and a tail. A dog also has these same characteristics. But a cow has other characteristics that distinguish it from every other animal. These distinctive attributes constitute its definition (lakṣaṇa). It is necessary to know these distinct features to be able to identify a cow so that it is not mistaken for a horse or a donkey. In this regard, the following statement is relevant: “An object is determined by its defining characteristics (lakṣaṇa) and by the appropriate means of its valid cognition (pramāṇa) and not merely by making an unsubstantiated assertion about it” (lakṣaṇa-pramāṇābhyāṁ vastu-siddhiḥ, na tu kevala–pratijñā-mātreṇa). Accordingly, Śrī Jīva begins this new section by defining bhakti before elaborating its practice.

The intrinsic and extrinsic characteristics of bhakti are summed-up in two famous verses (SB 1.2.6-7) spoken by Sūta Gosvāmī to Śaunaka. The first verse defines bhakti as constituted of causeless, unobstructed sacred service to Śrī Kṛṣṇa, and the second defines bhakti as that which gives rise to knowledge and detachment as its concomitant effects.

The intrinsic definition of bhakti is loving attendance (anugati) upon Śrī Kṛṣṇa by the three faculties of body, speech, and mind. This excludes all service that is prompted by some ulterior motive, such as fear. In some parts of India, the phrase bhaya-bhakti, “fear-based devotion,” is popular. In Rāma-carita-mānasa (Sundera-kāṇḍa 57), Tulasidāsa also articulates the same idea: “Thereupon, Śrī Rāma indignantly said, ‘There can be no love without fear’” (bole rāma sakopa taba bhaya binu hoi na prīti). Śrī Jīva Gosvāmī, however, does not accept fear as belonging to the intrinsic nature of bhakti or as an impetus for true bhakti.

The continuous enactment (anuśīlana) of favorable service meant exclusively for the pleasure of Śrī Kṛṣṇa, that is devoid of all predilection toward ulterior desire, and that is unobscured by strivings for jñāna and karma, is called paramount devotion (uttamā–bhakti).

Śrī Jīva cites a statement of sage Kavi (SB 11.2.34) to offer an alternative definition of bhakti. In this verse, the word upāyāḥ, “the methods,” constitutes the intrinsic definition of bhakti, because this refers to the actual limbs of bhakti spoken of by Bhagavān himself. These methods include uttering or singing the names of Bhagavān and other similar direct acts of devotion. The compound ātma-labdhaye, “for the attainment of the Supreme Self [Bhagavān]” constitutes the extrinsic definition of bhakti, because it refers to bhakti’s effects. The word ātmā in the latter compound refers to the threefold disclosure of the Self as Brahman, Paramātmā, and Bhagavān. This implies that bhakti is the sole means to realize the three primary manifestations of the Tattva and that there is no other process that can do so. This further implies that perfection on the paths of jñāna as well as yoga is not possible without the support of bhakti.