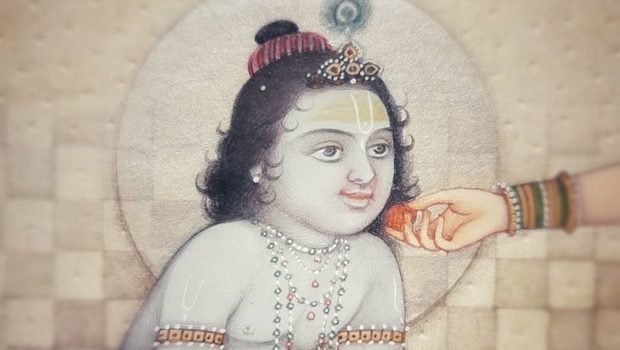 Bhakti In The Jīva: Inherent Or Inherited? Part 2: Bhakti, the Essence of the Svarūpa-Śakti

Additional articles in this series: Bhakti Comes from Bhakti; Bhakti, the Essence of the Svarūpa-Śakti; Is Rasa Totally Predetermined?

Having understood the foundation of devotional practice, and especially how its very beginning does not depend on any factor other than bhakti itself, we can then further develop this tattva on the natural conclusion that bhakti comes from bhakti and that it is not an underlying substance already embedded in the soul’s nature. Although our previous article might present enough evidence that bhakti is not inherent in the jīva (since they both belong to two different categories of śakti-tattva),1 still, given that this topic is not always understood and that it tends to engender various misunderstandings (which compromise our assimilation and application of the siddhānta, undoubtedly affecting the final fruit of our practice), it is important to take the necessary steps to honor these truths properly. So in this article and the following ones, we will share various approaches that hopefully clarify and shed new light on this fundamental subject.

To begin with, we should remember that one of Śrī Kṛṣṇa’s countless names is Ātmārāma, or “self-satisfied.” This designation implies that he does not need to go outside of himself to experience any pleasure at all.2 Rather, he is exclusively dedicated to interacting with his svarūpa-śakti, or that personal energy that resides in Bhagavān’s own inner being.3 So if we as jīva-śakti desire to interact with Ātmārāma Śrī Kṛṣṇa so that we may provide him with any kind of pleasurable service, then we will naturally require the entry of the same śakti that allows for such an experience in Bhagavān himself. And that śakti is the svarūpa-śakti, also known as bhakti-śakti.

Śrīla Jīva Goswāmī takes us even several steps beyond this (still-general) explanation of devotion by saying that Śrī Kṛṣṇa enjoys the pleasure derived from his interaction with bhakti (known as bhaktyānanda) much more than the one derived from his own being (known as svarūpānanda).4 In other words, Śrī Hari experiences the ultimate peak of bliss through his own inner pleasure-giving potency, also known as hlādinī-śakti, whose essence is constituted of bhakti and ultimately personified in the form of Śrī Rādhā. Therefore, it goes without saying that bhakti cannot refer to any type of bliss inherent in the jīva, since the pleasure corresponding to the ānanda of the soul (ātmānanda) is extremely minute and totally incapable of attracting and captivating Bhagavān, whereas bhakti, which is the essence of the svarūpa-śakti, is indeed completely capable of doing so. In Bhakti-sandarbha 142, Śrī Jīva Goswāmī resoundingly confirms this point by stating that “bhakti is the supreme aspect of this internal potency called hlādinī-śakti.”5

Thus, engaging in bhakti means, first and foremost, to place ourselves under the influence of the bhakti-śakti through the process of surrender.6 And to the extent that we increase our surrender more and more at the feet of the representatives of this divine agency (śrī guru, Vaiṣṇavas, nāma, the Bhāgavata, and so on), we will be able to receive the grace of bhakti and thereby incorporate into our life all those ingredients that are not yet present in our own constitution. And only then, insofar as all of this happens, can we say that our service has finally become “devotional” and thus able to capture the attention of Ātmārāma Śrī Kṛṣṇa.7 Following this line of thought, bhakti is not something that “we do ourselves.” On the contrary, it occurs when we submit to a specific divine energy that is superior to our own inherent constitution—instead of our making bhakti, bhakti actually makes us. It is not we who perform devotion; rather, it is devotion that performs us.8

While an energy such as māyā-śakti is an inert potency that needs to be animated by the souls in this world, the svarūpa-śakti is the energy that animates the inner life of Śrī Bhagavān himself. Thus, this energy does not depend on us to be animated. But we depend on it to receive genuine spiritual animation, which eventually will make us attractive to Kṛṣṇa and, therefore, allow us to leave the illusory animation as a byproduct of it. Under the shelter of this immaculate energy, our true potential and identity will gradually begin to appear. And this is the kind of bhakti (uttama-bhakti) that Śrī Rūpa Goswāmī describes and that Mahāprabhu gave to the world so generously.

In relation to the various types of components present in each of Bhagavān’s śaktis, it is explained to us that just as a jīva is made up of sat, cit, and ānanda (a certain type of existence, knowledge, and bliss),9 on the other side Bhagavān’s parallel svarūpa-śakti is made up of sandhinī, samvit, and hlādinī, which, in comparison, are something like super-sat, super-cit and super-ānanda.10 It is through the sandhinī-śakti that Bhagavān maintains his own existence and that of others; through his samvit-śakti he has knowledge about himself and also makes himself knowable to others; and finally, through his hlādinī–śakti, Śrī Hari experiences joy and makes others experience it as well.11 These three aspects are truly inseparable from one other. But when the svarūpa-śakti manifests, one of them predominates and the other two remain in the background. When sandhinī-śakti predominates, Bhagavān’s dwelling and associates “appear”; when samvit-śakti predominates, the worshiper’s consciousness is awakened; and when hlādinī-śakti predominates, love for God is manifest.12 In this way, the nature of bhakti is as self-manifest and independent as that of Śrī Kṛṣṇa himself. Bearing this in mind, we can conclude that one engages in sādhana only to make one’s heart apt for the divine descent of devotion, which appears by bhakti’s own desire and will, attracted by our sincere call.

This svarūpa-śakti is the main energy of Śrī Kṛṣṇa, so all the other śaktis originate from it. Jīva-śakti is a partial manifestation of svarūpa-śakti, and māyā-śakti is a distorted manifestation of this same energy. Since the jīva is a partial expression of this inner potency, it exists eternally, can know itself, and has the ability to experience up to the bliss of brahmānanda. However, it is only when the jīva comes into contact with the svarūpa-śakti through the guru-paramparā that it can realize its full potential for existence, knowledge, and happiness. This is a potential that is not present in māyā-śakti, for all manifestations (including material knowledge and pleasure) are relative and transitory, the latter leading only to higher levels of suffering. Then, it is only in connection with svarūpa-śakti that jīva-śakti has the potential to experience an eternal relationship with Kṛṣṇa, being itself a partial manifestation of svarūpa-śakti.

When the jīva-śakti comes into contact with the svarūpa-śakti through the paramparā, its dormant spiritual potential gradually awakens. This contact is Kṛṣṇa himself reaching out to the jīva in whatever way Bhagavān deems most appropriate, resulting in the jīva’s desiring a particular type of relationship with Śrī Hari in reciprocity. Through connection with śrī guru, faith enters our heart, such faith being our gurudeva’s own realization, the support and foundation behind the chanting of the Kṛṣṇa nāma and Kṛṣṇa mantra that he or she gives us, as well as the blessings that he or she gives us to chant. This is the real seed of bhakti given to the disciple by śrī guru. This seed is something like an initial investment in an idea that one may have to start a business, which will then realize its potential through some greater capital. Thus, with the investment of Śrī Kṛṣṇa’s svarūpa-śakti, the jīva realizes its potential, finding that what emerges from there is something worthy of consideration and distribution. Similarly, by listening, chanting, and engaging in the other aṅgas of bhakti, consciousness is purified and one’s relationship with Kṛṣṇa begins to manifest. When the devotee eventually places him- or herself more intensely under the influence of svarūpa-śakti, bhāva illuminates the heart and his or her life becomes most significant, in the full sense of the word.13

At this point, it is appropriate to establish the nondifference between the terms svarūpa-śakti and bhakti. In other words, if we agree that the jīva has no inherent svarūpa-śakti but at the same time we say that the soul has inherent bhakti, then we do not understand that we cannot have bhakti without having the svarūpa-śakti. They are inseparable.14 In his Prīti-sandarbha (63), Śrī Jīva Goswāmī further clarifies this point by describing the hlādinī-śakti (one of the three components of the svarūpa-śakti) as being inherent in Bhagavān but not in the jīvas:

What is the occasion which makes the Lord become mad with his bliss? It is not like the illusory bliss of material sattva of the Sāṅkhya philosophy, since scriptures say that the Lord is never overpowered by māyā and he is satisfied in himself. It is not bliss of Brahman’s svarūpa propounded by the impersonalists, since that does not produce such an extreme condition. It is not the bliss of the jīva, since that is very meager. . . . Thus, what remains as a cause is the Lord’s hlādini-śakti, the bliss of his svarūpa-śakti. By that the Lord experiences bliss of his svarūpa, and by that bliss he becomes a blissful person. The functioning of all types of intense bliss belonging to the hlādini-śakti is placed in the devotees and is called prīti for the Lord. This must be inferred when all alternatives mentioned above have been exhausted.

Indeed, some jīvas can have inherent bhakti, but only if they have already acquired bhakti-saṁskāras in previous births through association.15 In his commentary to Bhakti-rasāmṛta-sindhu 3.2.77, Śrīla Viśvanātha Cakravartīpāda explains that the cause of the bhāva that eventually arises in a sādhaka is sādhana or mercy, both arising from sādhu-saṅga. On the other hand, the cause of the appearance of bhāva in the nitya-siddhas is what Viśvanātha calls anādi-siddha-saṁskāras, or “perfect devotional impressions existing without a beginning.” Since sādhakas do not possess such inherent impressions, they can (and should) obtain deep bhakti-saṁskāras through sādhu-saṅga, as well as from subsequent practice arising in such association. Śrī Viśvanātha further confirms this same point in the sixth verse of his Rāga-vartma-candrikā, where he states that the greed that qualifies someone for rāga-bhakti is not inherent in the jīvātmā, but it comes mainly through the mercy of Kṛṣṇa’s devotees. He further comments that such mercy is of two types: ādhunika, or recent (mercy acquired in this lifetime), and prāktana, or old (mercy acquired in previous lifetimes).

In this way, for us to engage in bhakti, we need to first receive the required bhakti-saṁskāras (whether in this lifetime or in previous ones), which descend into our lives through sādhu-saṅga, and originally from the hearts of Bhagavān’s eternal associates, the rāgātmikās, whose very constitution is made of anādi-siddha-bhakti-saṁskāras. Thus the conclusion remains the same—bhakti is not inherent in the jīva, but actually it comes from bhakti itself, in the context of sādhu-saṅga.16 To further pound this foundational siddhāntic post, we conclude this essay with two well-known verses from Caitanya-caritāmṛta that establish this unequivocal truth:

If there is faith due to the company of saints and devotion to Kṛṣṇa, the fruit of such devotion will be prema, and material life will go extinct. Without mahat-kṛpā (the grace of the great souls), no activity can be counted as bhakti. Let alone attaining Kṛṣṇa, even liberation from material bondage is not possible.

Additional articles in this series: Bhakti Comes from Bhakti; Bhakti, the Essence of the Svarūpa-Śakti; Is Rasa Totally Predetermined? 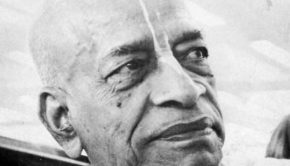 The Remnants of Srila Prabhupada →

3 Responses to Bhakti In The Jīva: Inherent Or Inherited? Part 2: Bhakti, the Essence of the Svarūpa-Śakti