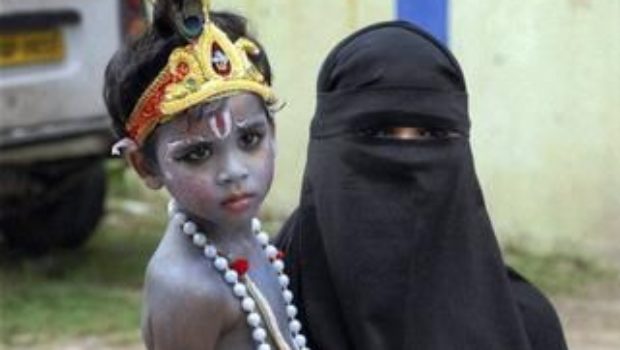 The Power Of Love

The Moghul occupation of India was not without Muslim atrocities, including the desecration of Hindu temples and holy sites. And these wounds have left scars on religious Hindus to this day, scars that have surfaced in the form of present-day legislation that keeps the fire of Hindu-Muslim conflict burning in Bharata.

That said, I would like to turn readers’ attention to an obscure yet powerful force during the height of Bharata’s Moghul occupation that demonstrated its power to bridge the divide between the two religious factions, turning religion into mysticism and the inner experience that transcends religion and nationalism.

The 16th century Vaisnava Hindu mystic, Sri Caitanya, became a morally stout mendicant as a young adult—at the age of 24. Yet internally he was preoccupied with the apparently adulterous romantic life of Radha and Krsna depicted in the poetic works of Jayadeva, Candidasa, Vidyapati, and the most poetic of the Hindu Puranas, Srimad Bhagavatam. And from the latter he derived his philosophical support as to the transcendent nature and spiritual purity of this love affair, a purity out of which his external moral fortitude arose.

The spirituality and extraordinary ecstasy expressed by Sri Caitanya attracted a good number of followers in his time and the century that followed his passing, and today they number in the millions. Among his immediate followers and those of the following generation, many were poets, and philosophers, and composers who retold his story, reasoned deeply about it—explaining it with references to the sacred Hindu texts—and composed songs about him and the object of his preoccupation, the romantic life of Radha and Krsna.

These literary contributions served as tools to attaining his ideal that transcended caste, nation, and religion, and they had a profound effect on a good number of pious Muslims, who themselves in turn composed poems and songs and produced art and drama centered on Radha Krsna romanticism.  Notably, however, these Muslims did not convert to Hinduism but found in Sri Caitanya and his preoccupation a symbolic example of the heart of that which they themselves were striving for, albeit in different words than those found in the Koran. Yet so moved these Islamic devotees were that they also composed in praise of passionate love of God, following the example of Sri Caitanya’s followers. Some of these Muslim poets not only prostrated themselves in song at the feet of Radha and Krsna but also expressed sincere devotion for Sri Caitanya. That is, they entered the nonsectarian heart of mysticism, transcending both Islam and Hinduism. They leaned upon Sri Caitanya and the method to his spiritual madness to attain their own ideal of salvation. While Sri Caitanya’s goal was to attain prema and participate in the eternal dance of Radha and Krsna, these devoted Muslims, charmed by his example, employed his method to attain mukti through a passion for this ideal likened to that of lover for her beloved.

The following from Saiyad Martuza’s lyrics serve as an example:

Oh, Kanai thou art the custodian of the ferry ghat and the watchman of the path.

I offer my fresh youth as the ferry fare. The market time is well past, but there is no transaction. See the Sun has reached the meridian, says Syed Martuza. Oh Radha, the milk-maid, lost are all milk-maids in the market of Kanaiya.1

Ali Raja writes also in the mood of Radha pining for Krsna,

What a moment I chose for coming down to the river!
At the sight of the world-enchanting Son of Nanda (Krsna)
My heart is nearly bursting.

And in praise of Gora, Sri Caitanya, we find the following,

Long live Gora, who has stolen my heart,
He dances himself, absorbed in his own delight.
The khol (clay drum) and the hand-clap (kartala) sound in beats,
And the devotees accompany with their ecstatic dance.

Thus, song about Krsna, his name, tales of his exploits—his love for Radha and so on—the mere repetition of which brings in the least salvation from samsara, serves as powerful, nonsectarian tool for transcending the nascent nationalism that seeks to divide us today, often in the name of religion.

5 Responses to The Power Of Love