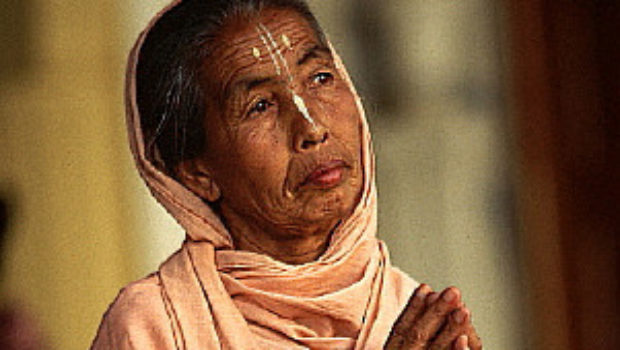 By Babaji Satyanarayana Dasa, originally published by the Jiva Institute.

In Anucchedas 186 to 202, Śrī Jiva Gosvāmī describes various types of sādhus belonging to the paths  of karma, jñāna and bhakti. His intention is to make us understand those sādhus who are fit to be associated with. In the course of this description, he also describes a lower level bhakta, citing the statement of sage Havi. While discussing this verse, he makes an important observation about a devotee’s śraddhā that is defined. Taking this as the cue, I make a distinction between śraddhā in general and śraddhā based upon śāstra. This is explained in my commentary on Anuccheda 190. I present it here for the interested readers.

Characteristics of a Neophyte Devotee

Translation of the Text

Now sage Havi defines the neophyte devotee (kaniṣṭha) in terms of his physical traits (kāyika-liṅga)—which take the form of the outward behavior he exhibits in the matter of bhagavat-dharma—and to a partial extent, in terms of his psychological disposition (mānasa-liṅga):

One who offers worship to Hari with faith in the deity form alone but who fails to honor Him as present in His devotees or in other living beings is recognized as a prākṛta-bhakta, or a devotee whose nature [prakṛti] is in the very beginning stage of formation.

This verse states that the neophyte devotee worships Bhagavān only in the form of the deity. He does not perceive Bhagavān’s presence in His devotees and consequently certainly not in others either. This is because, within his being, there is an absence of the appearance of love for Bhagavān, an absence of awareness of the glory of true devotees, and an absence of the appearance of a devotee’s fundamental quality, which is the attitude of reverence for all living beings. Such a person is a prākṛta-bhakta, “a beginner,” meaning that his cultivation of bhakti has just recently begun. Additionally, his śraddhā, or faith, is not the outcome of assimilating the import of scripture. This attitude is characterized in the following statement:

One who believes this corpse-like body, which is constituted of the three elements, mucus, bile, and air, to be his true self (ātma-buddhiḥ); who thinks of his wife, children, and others as his very own (sva-dhīḥ); who regards earthen images as objects of worship (ijya-dhīḥ); or who accepts the water of a river to be a place of pilgrimage (tīrtha-buddhiḥ); but who never views those who have realized the Absolute in the same manner [i.e., as one’s true self, one’s very own, one’s worshipful object, and one’s sacred place of pilgrimage], is to be considered as an ass among animals.

These attitudes are due to ignorance of the scriptural conclusions.

Consequently, the faith of the neophyte arises only out of social conventions (loka-paramparā), as described earlier. Thus, a spiritual practitioner (sādhaka) in whom divine love (prema) has not yet manifested but who is endowed with faith rooted in scriptural knowledge is to be understood as the primary standard of a neophyte devotee (kaniṣṭha).

Earlier it was said that śraddhā is the primary prerequisite for bhakti. This śraddhā can arise either from the customs and beliefs of one’s own cultural environment (laukika-śraddhā) or from a systematic study of śāstra (śāstrīya-śraddhā). In India, it is generally seen that in every area or village, some particular deity is worshiped. The people native to a given place naturally tend to be devoted to the deity present there, since they observe the deity’s worship being conducted by their seniors from their very childhood. They also participate in local festivals related to that deity. All this creates firmly reinforced impressions (saṁskāras) in their minds, and when they grow up, they also continue the tradition of worshiping that deity.

Over time, this tradition becomes an established social convention (loka-paramparā). If a community member does not conform to the local convention, he feels divorced from his community. This naturally creates a problem in his social life. It is thus seen that in different parts of India, people predominantly worship either Kṛṣṇa, Rāma, Ganeśa, Śiva, Kālī, or numerous other deities in accordance with whichever deity’s worship is popular in their area. These worshipers have almost no knowledge of śāstra. They simply follow what others before them have done.

The same of course applies to the practitioners of other religions, such as Christianity, Judaism, Islam, Sikhism, and so on. When religious practice is rooted in conventional faith alone (laukika-śraddhā), it has no basis in knowledge of either scripture or theology. As a result, it tends to be weak and prone to counter-arguments and the loss of faith.

The second type of śraddhā (śāstrīya-śraddhā) is that which ensues from hearing and studying śāstra under the guidance of a qualified devotee. This is the śraddhā that forms the basis of the three types of eligible bhaktas defined in Bhakti-rasāmṛta-sindhu (1.2.17-19). Such bhaktas are very rare.

At present, a third category of śraddhā has become prevalent, namely, the faith that ensues from religious proselytization. Practitioners who acquire such faith take to the path of bhakti (or any other religion) due to the influence of indoctrination. It is generally the case that such practitioners have not studied the śāstra in an authentic manner, but they are also not completely ignorant of it like the first group.

Most bhaktas at present belong to the first and third groups. Śrī Jīva Gosvāmī comments that the primary standard of a neophyte is one whose śraddhā is based upon śāstra. He is described in Bhakti-rasāmṛta-sindhu (1.2.19) as follows: “One whose [śāstrīya-] śraddhā is weak (komala) is determined to be a neophyte (kaniṣṭha).”

In commenting on the latter verse, Śrī Jīva writes that the neophyte is not particularly skilled in arguing on the basis of śāstra, and thus it is possible for an opponent to refute him by presenting arguments contrary to bhakti. This, however, does not mean that the neophyte will give up the path, because he is endowed nonetheless with the beginning stage of authentic faith. He may feel disturbed for some time by the opponent’s counter-arguments, but he will fix his mind once again on bhakti.

The type of neophyte described by Havi is of a lower or even more basic category. His faith extends only to Bhagavān’s presence in the deity but not to that of His presence in other living beings, including the devotees. This is due to the fact that his vision has not been informed and transformed through a systematic study of śāstra.

The neophyte defined in the above cited verse from Bhakti-rasāmṛta-sindhu is superior to the neophyte defined in the principal verse of this anuccheda. The former has respect for devotees and will also be predisposed to feel Bhagavān’s presence in other beings, even though the immediate experience of such is lacking in him. He will strive to adhere to śāstra, although he may not always be successful in this attempt. In comparison, a madhyama-bhakta has a deeper level of respect for devotees, because he is well acquainted with the glory of Bhagavān, bhakti, and the bhakta. He also knows that disrespecting devotees is displeasing to Bhagavān. For these reasons, he establishes friendship (maitrī) with them.