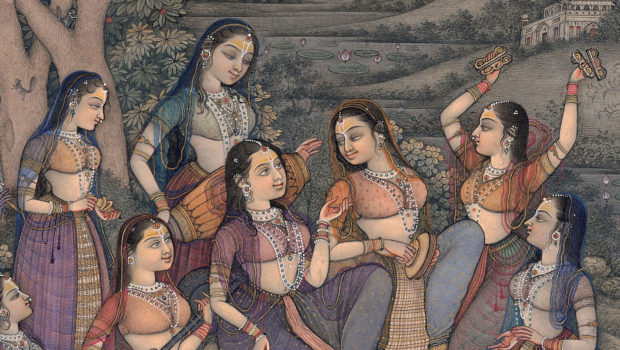 The Origin of the Kāma Gāyatrī Mantra

Although Śrī Kṛṣṇa is full in himself, the autumn nights scented with the fragrance of night- blooming jasmine stimulated him to enjoy his līlā of love. The taste for conjugal love that is inherent in his nature was thus allowed to manifest due to the autumn season. Bharata’s ancient doctrine of aesthetics lists the autumn nights as one of the uddīpanas, or stimuli, for conjugal love. Being the fountainhead of all existence1 and the reservoir of aesthetic experience, Kṛṣṇa is the origin of the propensity for this love.2 When we speak of Kṛṣṇa, we speak of the very source of all being and experience described in the Upaniṣads. Kṛṣṇa is not the sectarian God of a few, but the Absolute, the ground of being, and more importantly the embodiment of the joy that all souls exist to taste.3

Kṛṣṇa’s conjugal love is not touched by the material inebrieties that frustrate our expression of such love. His desire was a product of the necessity to celebrate his fullness, not one resulting from the lack that we souls experience due to misidentifying with matter.4 To meet this desire, he activated his internal śakti and called the gopīs to dance with him in the dead of night.

Previously, he had promised the unmarried gopīs that he would meet with them and fulfill their desire to marry him by enjoying with them.5 They had fasted and performed penances, petitioning goddess Kātyāyanī to give them Kṛṣṇa as their husband. They thus demonstrated that although they appeared to be mere village girls, their love for Kṛṣṇa constituted comprehensive and realized knowledge of the Vedas.

The worship they engaged in had both an exoteric and esoteric significance. Exoterically, the sacred Vedas encourage material enjoyment through the performance of ritual. Thus there are rituals for acquiring a good husband, good children, good health, and so on. However, the Veda, seen in its esoteric light, prescribes only the pursuance of transcendental love. While the Vedas seem to encourage material prosperity through religious ritual, its deeper intent is to awaken faith in themselves.

When, through the execution of prescribed rituals, one acquires the desired material result, faith in the Veda awakens. This faith is the true fruit of the ritual. As this faith develops in a person, he or she naturally looks more deeply within the Veda, only to find its secret teaching. This secret teaching leads to liberation from material life and the development of love of God. This is the sole purpose of the Vedas.6 The gopīs must have performed Vedic rituals in previous lives to have arrived at their particular approach to the Vedic rituals, through which they hoped to get the Absolute Truth personified as their husband.7 So intense was their desire for loving God that it can only be compared to the love of a young woman for her lover. They performed the Vedic ritual prescribed for getting a good husband, yet the spirit of their observance was to have an intimate transcendental relationship with the Absolute, rather than to marry into a life of material illusion. It was this spiritual passion alone, and not the benediction of the goddess, that assured their success. The sincerity of their approach is evident from the fact that Kṛṣṇa accepted their proposal.

During the observance of their vows, while the gopīs were bathing in the Yamunā River, Kṛṣṇa had come and stolen their clothes. At that time, he had given the gopīs assurance that in the future he would embrace them in love. One year later, with the rising of the harvest moon, the autumn nights in the beautiful Vṛndāvana forest provided the most suitable setting in which to fulfill his promise.

As Kṛṣṇa’s mind thus turned toward love, the full moon, king of the stars, rose on the eastern horizon. The reddish rays of the moon, who is the presiding deity of the mind, covered the sky and dispelled the suffering of those who watched him, just as a lover meeting his beloved alleviates her pain of separation.

This moon appeared to be the very mind of Kṛṣṇa, who would preside over the minds of the gopīs as the moon presides over all the stars. The moon’s reddish rays revealed the passionate temperament of Kṛṣṇa as he contemplated the love dance he was about to engage in. The Upaniṣads also identify the moon with virility, and there is no better evidence for this than this evening when he who is the joy of the moon dynasty expressed his mind’s desire to enjoy passionate love with the gopīs.

Rising in the east, the moon’s sending its rays in all directions seemed to speak to Kṛṣṇa of paramour love. It was as if the moon spoke thus:

I am the moon, who brings happiness to everyone, and I am the lover of the wives of the gods of the directions. You too are ‘the moon’; why do you now tarry to make love, not going to the wives of other men?

The East is the direction of the gods, and thus this passionate desire of Kṛṣṇa’s is godly and free from impropriety. He is the pūrṇa avatāra and all belongs to him, and he will reveal such on this occasion, just as the moon reveals that the night belongs to him alone when he expresses himself in all his fullness. Kṛṣṇa’s desire to enjoy love with the gopīs informs us of his fullness and proprietorship over all. It also sheds light on the darkness of false proprietorship that underlies the material experience.

When Kṛṣṇa saw his mind in the form of the passionate moon, the face of his beloved, Śrī Rādhā, appeared in the moon of his mind as well. It was as if the brilliance of her beauty appeared as the bright shine of the autumn moon. Kṛṣṇa also saw the kumuda lotuses blooming in response to the moon’s beams as they shone upon the forest. Thus to the lotus of his lips he applied his flute, calling the gopīs and Śrī Rādhā to join him. Desiring anurāga, he played his musical rāga of love.8

By this time, Kṛṣṇa had perfected his flute playing, which was intended all along to attract Rādhā. Previously, he had met with only partial success. At first, he was successful in enchanting the various forest creatures. Later, he successfully attracted the other gopīs, but Rādhā fainted and did not come.9 During the entire rainy season, Kṛṣṇa had practiced his flute playing, thinking that by so doing he could perhaps enhance the beauty of the autumn season, bringing it under his control by the time its full moon arrived. By doing so, he would be able to captivate Rādhā, who would be captivated by the autumn season itself. Indeed, this time he was successful, causing the fragrant mallikā flowers to bloom out of season and during the night rather than during the day.

The sound of the fifth note of Kṛṣṇa’s flute, which expresses his passion, entered the ears of Rādhā and the gopīs and stole their hearts. That same passion, aroused already in their hearts due to the full face of the autumn moon, was thus increased, and they left their homes unbeknown to each other to capture the thief of love who had stolen their hearts. The gopīs each heard their own name in the sound of Kṛṣṇa’s flute, and as they ran, their earrings swung to and fro in their haste. Kṛṣṇa’s flute has eight holes and thus eight notes by which he attracts all living beings. The fifth note is especially for the gopīs. It is said that the goddess Gāyatrī, the prototype of all Vedic mantras, heard that the personified Upaniṣads aspired to take birth as gopīs and that they were successful.10 Desiring the same for herself, she appeared as Gopāla-tāpanīya Upaniṣad, in which the kāma gāyatrī is explained. The fifth note of Kṛṣṇa’s flute is this same kāma-gāyatrī-mantra.

4 Responses to The Origin of the Kāma Gāyatrī Mantra