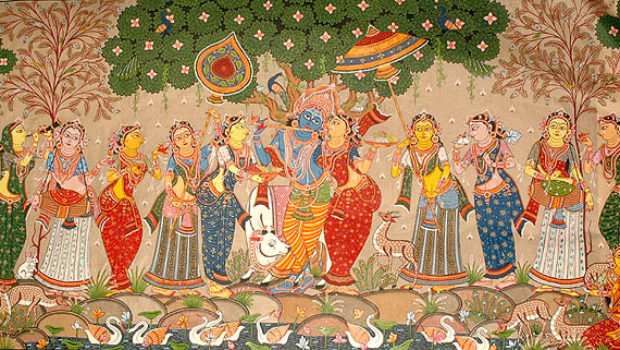 An Invitation to All, Heard Only by a Few

Kṛṣṇa līlā can be seen as a metaphor for an ontological reality that human society can contemplate, and at the same time, Kṛṣṇa is that ontological reality—the perfect object of love. As such, no matter how one fixes one’s mind upon Kṛṣṇa, one will attain transcendence in due course. If it is possible for one to attain a transcendental result even by absorption in enmity toward Kṛṣṇa, what must be the result of one who becomes absorbed in passionate love for him?

Transcendence is a variegated experience, the apex of which is reached by absorbing the mind in the Absolute. In devotional Vedānta, absorbing the mind during meditation does not result in the object of meditation becoming more and more abstract until one ultimately reaches a formless reality. In other systems, the object of meditation is not important. In bhakti, however, the only object of meditation is the Deity—Kṛṣṇa. The result of meditating upon Kṛṣṇa is that one develops more and more devotion for him, until one actually experiences the direct vision of Kṛṣṇa and his līlā and ultimately enters there, never to return to the world of duality. The devotee, that is, enters a dynamic union in love with the Absolute wherein he realizes oneness in purpose with Kṛṣṇa.

Absorbing the mind in the Absolute is the goal of meditation, and since there is no more consuming mental state than that of passionate love, this passion for Kṛṣṇa is the realization of that goal. When this is cultivated within the context of spiritual practice, one can attain a spontaneous relationship with God similar to that of the gopīs. Although the gopīs seemed to merely lust for Kṛṣṇa, their eagerness for his association was a product of many lives of spiritual culture.

Seeing that the gopīs had arrived, Kṛṣṇa greeted them with charming but confusing words. He welcomed them with praise and asked what he could do for them. He first questioned them to determine if they had come to request a favor, indicating that if they had, they should simply ask and he would oblige them. Secondly, he queried about their hasty approach. Had they run into the forest because of some dreadful occurrence in the village?
From these first two inquiries, we learn that there are various motives with which people approach God. People sometimes approach God only for the purpose of gaining a blessing from him so that their family life will be improved. Others approach God out of frustration in social and familial affairs, rather than out of mature understanding of the positive value of spiritual culture. This second group rejects the world in pursuit of liberation. Kṛṣṇa thus inquired about the gopīs’ motive for coming to him. If it was neither of the above, then Kṛṣṇa wanted to know, “Why did you come?” This final question indicates that there is a third motive for approaching God, a motive that can only be explained by way of claiming to have been “called.” This is pure bhakti, in which the devotee has no motive (ahaitukī). The devotee comes to Kṛṣṇa out of love. Such devotees desire neither material gain nor liberation from saṁsāra—they only want to love Kṛṣṇa. This is the best reason for approaching God, and it was no doubt the gopīs’ mood. They came on his terms, answering to the clarion call of his enchanting flute. It was, although an invitation to all, heard only by a few.

One Response to An Invitation to All, Heard Only by a Few