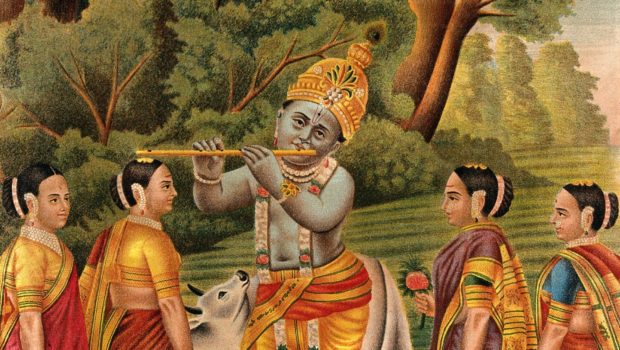 Should I Stay or Should I Go?

Kṛṣṇa teased the gopīs, testing their resolve. He warned them of the dangers of the night, both its darkness and its inhabitants.

“The dreadful night is quite frightening, and so its creatures too,
return home slender-waisted,
this is no place for girls like you.”

Kṛṣṇa’s words confused them, for they could be taken in two ways. Overtly, he seemed to be encouraging them to go home. However, covertly he was encouraging them to stay. On the surface, Kṛṣṇa warned them of the danger of the night, which even though well-lit due to the full moon’s rays, was dangerous because of wild animals. Furthermore, they were in danger of moral degradation, for they were alone at night with a young man. He cautioned the gopīs about the nature of the mind in such circumstances, for men and women together are like butter and fire.

Yet covertly, through the exercise of indirect speech, Kṛṣṇa was encouraging the gopīs to remain with him. Kṛṣṇa had called the gopīs, and he was not merely testing them. Although fully God, he was also fully human.1 Thus his speech was invested with dual meaning. As God, he felt it necessary to give them a final warning of what they were about to do. As their lover, he desired union with them.

While Kṛṣṇa seemed to be saying “don’t stay” (vrajaṁ neha stheyam), his actual intention was to say “don’t go” (vrajaṁ na, iha stheyam). Regarding the fearful night with its dangerous animals, Kṛṣṇa indirectly told the gopīs that the night was not at all fearful for them, because it’s darkness and ferocious animals would keep their husbands and family members away. Thus he told them to stay with him and not go home. They would be safe with him, for the forest would protect them from anyone who might come after them. Regarding the potential for moral degradation that the circumstances seemed to lend themselves to, Kṛṣṇa told the gopīs that because he was a brahmacārī and they were chaste ladies, there was no cause for concern.2

Kṛṣṇa continued to confound the gopīs by telling them that their mothers, fathers, sons, brothers, and husbands, not seeing (apaśyantaḥ) them were searching for them in a panic.3 Yet in warning them thus, he secretly told them that these family members would not find them, in case the gopīs feared that the place of their meeting was not safe. If the mothers gave up, their fathers would come. If they failed, the gopīs’ sons and brothers would come. If they too failed, their husbands would come with even greater determination, but none of these relatives would find them. At this point, the gopīs were truly lost—lost and found.

Hearing Kṛṣṇa’s speech, the gopīs began to look around at the beauty of the forest night. They did not dare to look him in the eye for fear that what he seemed to state was his actual intention. Scanning the forest’s moonlit beauty, they looked everywhere but at him. Kṛṣṇa, seeing their reaction, told them, “Now you have seen the forest with its flowers shining in the light of the full moon, and you have seen the beautiful trees with their leaves trembling in the cool breeze coming from the Yamunā. Therefore, do not delay here any longer, go home (tad yāta mā ciraṁ goṣṭhaṁ), serve your husbands, and feed the crying babies.”
Kṛṣṇa addressed the gopīs as satī, or chaste, as indeed they were, for everything belongs to Kṛṣṇa, and they were acknowledging this by surrendering themselves to him. Yet outwardly he told those gopīs who were already married—Rādhārānī, Lalitā, Viśākhā, and others—that they had a reputation to uphold and religious duties to perform in conjunction with their husbands, and should therefore return home. He told the unmarried gopīs that they should tend to the needs of the calves, and the gopīs who were married to return to their husbands and village children and feed them.

One Response to Should I Stay or Should I Go?