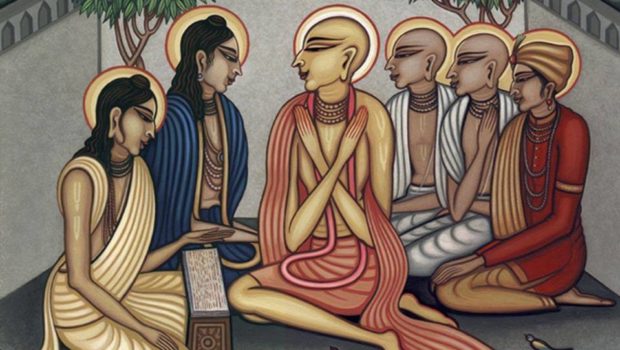 “I have great attraction for him,” he said, “But I don’t think it wise that at such a young age he has taken sannyasa, the renounced order of life. He has such a long life ahead of him; how will he be able to keep up the dignity of the life of a sannyasi, a life of renunciation? I can’t sit by and do nothing. I like this boy very much. I shall have to help him as a guardian, so that he may not lose his prestige by giving up sannyasa, attracted by the fascination of worldly pleasures.”

Gopinatha could not tolerate all this guardian-like advice. He told Sarvabhauma, “This young man, who is very beautiful, charming, and scholarly, has attracted your attention, and you want to become his guardian to keep up the purity of his life. Do you think you will have to help him? What do you mean by saying all these things? Don’t you know that he is really the incarnation of Godhead for this age? He is the avatara for Kali-yuga. He inaugurated the yuga-dharma of nama-sankirtana in Navadvipa, and his appearance is mentioned in the scriptures.” Sarvabhauma replied, “No, no! You are not talking to an ordinary person. Don’t think that you can say whatever you like and I will accept it. I am a hard nut to crack. What are you saying? There is no kali-yuga-avatara. One of the names of Vishnu mentioned in the Vishnu-sahasra-nama in the Mahabharata is Triyuga, ‘The Lord who appears only in three ages.’ That means that the Lord has no incarnation in Kali-yuga except Kalki, who is a pastime incarnation and not the yugavatara, the incarnation for the age.” Gopinatha replied, “You think yourself so learned, but although you have studied all the scriptures, and are so proud of your learning, the Mahabharata and Srimad-Bhagavatam are the main scriptures of the followers of eternal religious principles, and still you have no particular knowledge about that.”

At that time, Gopinatha Acarya quoted passages from the Srimad-Bhagavatam and Mahabharata (krsna-varnam tvisakrsnam, suvarna varna hemango). In this way, he pressed his point: “Here we find the direct avatara for the age of Kali. He has appeared to spread nama-sankirtana. He is not a man, but the Supreme Lord, Krishna himself.” Sarvabhauma said, “No, no. Go away. Mind your own business. Don’t think that you can instruct me.” And in this way they argued.

Later Sarvabhauma Bhattacarya told Sri Caitanya Mahaprabhu, “I would like to teach you Vedanta philosophy so that you can keep up the standard of your renunciation. I will teach you that this world is nothing, so that you never feel any charm to again enter into mundane life.” Śrī Caitanya Mahaprabhu said, “Yes, you are my guardian. Whatever you say, I must do. I will come and learn Vedanta philosophy from you at whatever time is suitable for you.

Then Gopinatha Acarya told Sri Caitanya Mahaprabhu, “Sarvabhauma is saying this because he doesn’t know your real identity.” Sriman Mahaprabhu replied, “Why are you speaking against him? He is my guardian. He was my father’s classmate, so he has great affection for me. It is out of affection that he poses himself as my guardian and looks after my welfare. I don’t find any fault in that.”

In a few days, Sri Caitanya Mahaprabhu began to hear Vedanta from Sarvabhauma Bhattacarya, and as Sarvabhauma would speak, he would remain silent like a good boy, as if he were hearing with a submissive attitude. But after he had been teaching Sri Caitanya Mahaprabhu for seven days, Sarvabhauma had some doubt in his mind. He thought, “What is the matter? I am such a great scholar in Vedanta and logic, and I am trying my best with all my intelligence to put before him the inner meaning of Vedanta, but I draw no response from him. He is only quietly attending my discourse as if he is deaf and dumb. And I can’t say that he does not understand me, for he has a sharp intellect. I am sure of this, but still he gives no appreciation, no response whatsoever. He raises no question and gives no indication whether he understands or not—nothing of the kind. Then what am I doing?” He could not keep to himself any longer. He put

“Even the liberated souls fully satisfied in the self are irresistibly attracted by the super excellent qualities of Krishna and surrender to him with unalloyed devotion.”

At that time, while listening to the explanation of Sri Caitanya Mahaprabhu, Sarvabhauma gradually saw that he was losing his position. His pride was finished. Astounded, he thought, “This youth, this young boy, is not an ordinary person. No ordinary intellect can refute my arguments. Leaving aside all of my attempts to explain this verse. He gave eighteen wonderful explanations of this particular verse. What is this? Such consistent, irresistible, devotional, and beautiful explanations are coming, superceding all those that with great energy and effort I explained. No human being can surpass my explanations. No human intellect can cross mine. This is a different sort of explanation. It is all-encompassing. But it is coming from this young boy? What is this?”

Gradually, he lost his faith in himself and became baffled. And then he recalled how Gopinatha Acarya had said that Sri Caitanya Mahaprabhu was not a human being and thought, “It is not possible for a human to explain things in this way—it is something supernatural.” Then Sri Caitanya Mahaprabhu revealed to Sarvabhauma his spiritual position as Narayana and Krishna combined. In a trance, Sarvabhauma saw all these things and fell at the Lord’s feet, and almost completely lost consciousness.

When he arose from his trance, he found that boy still sitting there like a student with great humility. Then Sri Caitanya Mahaprabhu asked him, “May I go for today?”

Sarvabhauma said, “Yes, you may go now.” The Lord went away, and Sarvabhauma remained there. After some time, he recovered, and began to think, “What have I seen? Four-handed Narayana, then Krishna playing the flute! I was not defeated by a man—that is my solace. Sarvabhauma became a changed man and composed two verses:

“I surrender unto the lotus feet of Sri Krishna Caitanya Mahaprabhu, who is an ocean of mercy. He is the Original Personality of Godhead, Krishna, and has descended to teach us the real meaning of knowledge, renunciation, and devotion to him.”

“Let the honeybee of my mind dive deep into the lotus feet of Sri Krishna Caitanya Mahaprabhu, who is the Supreme Personality of Godhead, Krishna himself. He has appeared to revive the path of unalloyed devotion, which had almost become lost due to the influence of time.”

These two verses were composed by Sarvabhauma Bhattacarya expressing that Sri Caitanya Mahaprabhu is the Supreme Lord himself. The next day, early in the morning, Sriman Mahaprabhu, with some prasadam from the Jagannatha temple, ran to Sarvabhauma while he was still in bed. He cried in a loud voice, “Sarvabhauma—How wonderful is this prasadam! It has a very extraordinary taste. Please take it. I have come for you with this prasadam.” Sarvabhauma arose from bed as Mahaprabhu offered him the prasadam, and he could not but accept it without even cleansing his mouth. Ordinarily a brahmana pandita, early in the morning, will first cleanse his mouth, bathe, offer different prayers, and only then take prasadam. But when Sri Caitanya Mahaprabhu personally came and offered it to him with his own hand, what could Sarvabhauma do? He had to accept that prasadam. Sri Caitanya Mahaprabhu told him, “We have previously experienced the taste of so many things like ghee, rice, sweets, and spices. We all know what flavors they have, but this is wonderful. This has touched the lips of Krishna himself. It is extraordinarily wonderful and tasteful.” Then, Sarvabhauma eagerly ate that prasadam and began uttering some mantras:

“One should take the maha-prasada of Sri Krishna as soon as one receives it, without consideration of time or place, even though it may be dried up, stale, or brought from a distant country.”

“The prasada of Sri Krishna is to be taken by gentlemen as soon as it is received, without hesitation. There are no regulative principles concerning time and place. This is the order of the Supreme Personality of Godhead.”

He took prasadam, and the Lord and servant embraced one another and began to dance in ecstasy. As they danced, the symptoms of ecstasy appeared in both of them. They perspired, trembled, and shed tears. Absorbed in ecstatic love, Sri Caitanya Mahaprabhu said, “Today, I have conquered the whole world, for I have converted a scholar like Sarvabhauma Bhattacarya. Now, he has so much faith in maha-prasada that without performing any Vedic rituals, he took the prasadam. My mission is successful!”

One Response to A Mysterious Incarnation