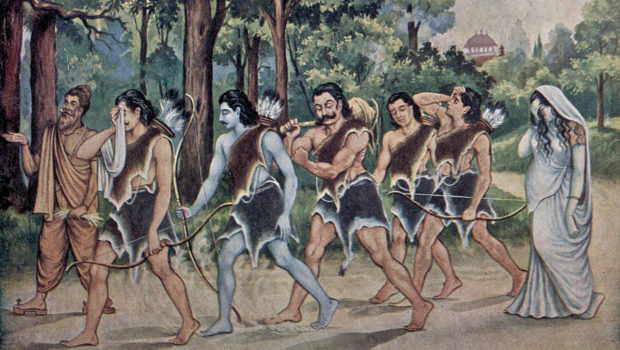 Why Do Good People Suffer?

By Satyanārāyaṇa Dāsa Bābājī, originally published at the Jiva Institute

Often people ask this question—why do good people suffer and bad people enjoy? This seems to be an age-old question. Such a doubt arose even in the mind of Draupadī. When King Yudhiṣṭhira lost his kingdom in a gambling match, he along with his brothers and queen Draupadī had to go into exile for twelve years. Certainly, it was not a pleasant life to live in the forest, especially after enjoying all of the comforts of palace life. Just one day before the gambling match, the Pāṇḍava brothers and Queen Draupadī had lived in an opulent palace with all amenities and comforts. And now suddenly, they had to renounce their royal dress and royal life and wander in the forest without any arrangement for even basic amenities such as food and a place to sleep. It must have been quite shocking, especially for Draupadī. At least the Pāṇḍava brothers were used to going to the forest for hunting. But Draupadī was a delicate queen and had no experience of living in the forest. Moreover, before coming to the forest, she was terribly insulted by Duryodhana and his brother, Duḥśāsana. Duḥśāsana dragged her by the hair into the assembly of kings and princes and tried to strip her naked in front of the assembled royalties. It must have been even more humiliating for her that her five heroic husbands, including Bhīma and Arjuna, were silent witnesses to the entire episode. Remembering all of this, Draupadī was very furious but helpless. She could not believe that this was happening. She was no ordinary woman but was known as ayonijā, or “not born from the womb.”

Yet, there she was, sitting on the earth without even a piece of cloth spread underneath. She expressed her anger, distress, and frustration to King Yudhiṣṭhira: “I have heard that dharma protects those who follow dharma. I know that you are a very dharmic person. You may abandon me, along with your brothers, but you will never give up dharma. I have never seen you engage in any adharmic act. You are humble, simple, compassionate, and charitable. Yet, now I see that dharma has not protected you. Seeing you like this, sitting under a tree, I feel bewildered. Where is dharma? And where is Īśvara? It is said that everyone is under the control of Īśvara, just like a bull is controlled by a rope passed through his nostrils. It is only Īśvara who arranges for one to go to heaven or hell. All happiness and distress are commissioned by Īśvara. He plays with everyone, just as a child plays with toys. O King, I understand that Īśvara is the caretaker of everyone and is very merciful. But now I see that He is not behaving graciously toward us. We, who adhere to dharma, are suffering, while Duryodhana, who is a cheater, is enjoying royal life. I do not appreciate the unjust behavior of Īśvara. What is the benefit of Īśvara giving wealth to Duryodhana, who is cruel, greedy, haughty, and adharmic? If everyone has to face his own karma, then certainly Īśvara will also be implicated in this sinful act. But if you say that Īśvara is all-powerful, and that no sin can touch Him, then I feel very distressed.” After speaking like this, Draupadi began crying.

Hearing these distressing words of Draupadī, King Yudhiṣṭhira, who was very calm and peaceful, spoke the following sagacious words: “O, my dear Queen, what you have said appears to be very appealing and logical. But it is steeped in ignorance, and is the opinion of atheistic people. I do not follow dharma with the intention to obtain some fruit, but I follow it as my duty. I do not give charity or perform yajña, thinking that this will uplift me to heaven. Regardless of good or bad outcomes, I perform my duty. I am not greedy for the results of dharmic acts; it is my very nature to follow dharma. Those who perform dharma with an intention to get some benefit are not truly dharmic. For them, dharma is a business. Just as a businessman sells or buys products to gain some profit, such people perform dharmic acts with the same intention. Sinful people, being influenced by atheistic ideas, engage in dharma and yet have doubts about it.

Therefore, on the authority of śāstra, I advise you not to doubt dharma. A person who doubts dharma, or the authority of śāstra, will be born in a subhuman species. Such a person is the lowest of human beings. Such a person thinks that dharmic people are foolish, and gives importance to his own intelligence and logic. Such a person will never achieve anything auspicious. We should never doubt dharma, which has been established by Īśvara and is followed by great sages, who have a deeper vision of life. If following dharma brings suffering, then the great sages like Vyāsa, Vaśiṣṭha, Maitreya, Nārada, Śukadeva, etc, would not follow dharma. Dharma is never fruitless and neither is adharma. Both give their respective results. Just remember your own birth, which was the outcome of a dharmic act. The results of karma are not easy to understand. Only the great sages and devas can understand how and when karma gives its result. Just because you do not see the result of dharma immediately, you should not doubt dharma, the devas, śāstra or Iśvara. The result of dharma will come in the due course of time. In the same way, those who are engaged in adharmic activity will get the result sooner or later. Those who cheat others may seem to enjoy and prosper, but their adharmic act will drag them down to hell. It is just a matter of time. Knowing this, you should not feel distressed and have faith in dharma and Iśvara.”

This beautiful dialogue can be found in the Vana-parva, chapter 30 and 31 of Mahābhārata. We should never doubt śāstra just because we are facing some difficulty in our lives. Dharma and adharma both give their results. Our difficulties may be an outcome of past karma. They can also be seen as the grace of Kṛṣṇa to make us more fixed in bhakti. Even great devotees like the Pāṇdavas faced immense difficulties but did not deter from the path of dharma. Bhakti is called param dharma. So even more so, there should be no thought of deviating from the supreme path of bhakti.

One Response to Why Do Good People Suffer?