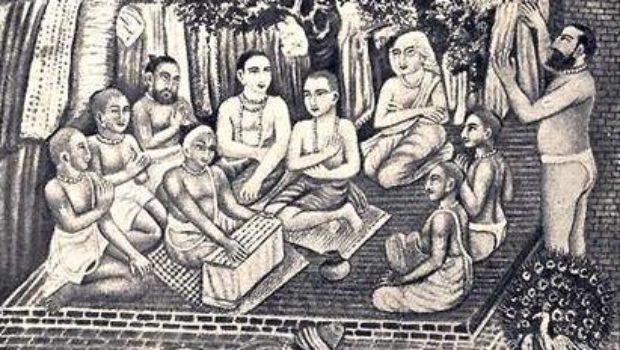 The Illustrious Emperor of All Scriptural Evidence

To speak about any tattva in Gauḍīya Vedānta is no less than a daunting task, a task that requires proper addressing of the issue at hand with all its present-day complexities as well as some acquaintance with the means to approach and theologize about it in contemporary terms. From both sides of the discussion, this demands the intervention of players who may be distinctly progressive but very traditional at the same time, knowing how to deal with the many current archetypes but doing so with a clear frame of reference coming from revelation—knowing about the need for epistemic hierarchy.

Simply put, epistemology is a philosophical department that deals with how we know what we know. This constitutes a methodology that determines the course of almost every investigation not only in the realm of Vedānta, but also in modern philosophy, science, and other areas of research. Without a preliminary discussion on the hierarchy and application of pramāṇas—in this case, sources of scriptural evidence—it is nearly impossible to come to a proper understanding on this or any other multifaceted topic.

While pramāṇa thus refers to the ideal means of knowing in Gauḍīya Vedānta, whatever is proven through it will be known as prameya. Therefore, before attempting to ascertain any philosophical issue (prameya) in the Gauḍīya sampradāya, first and foremost we have to determine the proper means to arrive at the desired conclusion (pramāṇa). In other words, pramāṇa is that particular method we choose in order to corroborate any specific conclusive truth, and prameya will refer to that truth which will be ascertained through pramāṇa. Unfortunately, this classical approach has been somewhat neglected in most contemporary Gauḍīya debates, which nowadays circle around prameya without any resolve, since pramāṇa has not been properly established first—once we have established pramāṇa, only then is it possible to understand what is prameya, since prameya comes from pramāṇa.1 And while most Vedāntic schools possess their own epistemic hierarchy to arrive at their particular conclusions, here I will briefly describe why and how Gauḍīya Vaiṣṇavas embrace a slightly different but no less remarkable system, which they consider the crest-jewel of all pramāṇa—Śrīmad Bhāgavatam.Śrī Caitanya, the very founder of the Gauḍīya sampradāya, mainly referred to the Bhāgavata as the supreme source of revelation. This text establishes its own ultimacy by describing how its author, the legendary Vyāsa, felt unsatiated even after he compiled the entire range of Vedic revelation. Then, under the guidance of his teacher, Śrī Nārada, Vyāsadeva finally composed his masterpiece in the form of the Śrīmad Bhāgavatam, through which he reached a sense of ultimate achievement by establishing the sovereignty of uttama-bhakti above any other goals and processes as well as the position of Śrī Kṛṣṇa as Svayaṁ Bhagavān, the nondual personal Absolute.  On the basis of this elaboration and in terms of epistemic hierarchy, Gauḍīya Vaiṣṇavas have always turned their attention toward the Bhāgavata as the preeminent source of revelation, considered as it is to be the natural commentary on Vedānta.

Despite what has been presented above, at this point some may contend that the Vedānta-sūtra should still have priority over the Bhāgavata because of having been written earlier, the Bhāgavata being an elaboration on Vyāsa’s original sūtras. That said, and taking into account what secular scholarship may be able to establish in terms of chronology, Śrīmad Bhāgavatam is considered by Gauḍīyas not as a book or as a mere record of historical events, but as an eternal reality manifesting itself in human history at some specific point in time and in earthly circumstances but remaining untouched by any relative influence whatsoever. Being nondifferent from Bhagavān himself, the Bhāgavata is viewed as being possessed of eternal existence, beyond time and without beginning or end. According to the book itself (1.3.40), this work constitutes the literary incarnation of the Godhead, so if we suggest that Śrīmad Bhāgavatam depends on what the Vedānta-sūtra says in order for it to make full sense, then we must remember that just as Bhagavān is the supremely independent entity—svarāṭ—so the same degree of independence (and therefore epistemic autonomy) should apply to the Bhāgavata, the supreme scriptural authority for the followers of Śrī Caitanya.

Since we invoked his most sacred name, let us share what Śrī Caitanya himself had to say about the Bhāgavata’s status in the realm of Gauḍīya revelation:

Besides the crystal-clear opinion of Śrī Caitanya on the supremacy of the Bhāgavata as the distilled essence of all forms of Vedic revelation, the Bhāgavata itself validates within its pages its own ultimacy in comparison to other forms of revelation, at both the beginning and the end of its discourse. This is known in classical Vedic hermeneutics as upakrama-upasaṁhāra, where the true purport of a text is determined by paying close attention to whatever has been said at its very beginning (upakrama) as well as during its conclusion (upasaṁhāra).6 Regarding upakrama, right at the Bhāgavata’s very onset, its vastu-nirdeśa-śloka (1.1.2) establishes the book’s supremacy.7 And after glorifying its content in utmost detail, it declares, kiṁ vā paraiḥ: “What need is there for any scripture other than this?” Arguably, Vedānta is included in this bold statement since its own author is the one declaring such a thing here. Then, the following verse (1.1.3) describes the Bhāgavata as nigama-kalpa-taror galitaṁ phalaṁ, the fully mature fruit of the desire tree of Vedic literature. Very soon after this, verse 1.2.3 depicts this work as śruti-sāram, the cream of all śruti. Then, in its next chapter (1.3.41) Śrīmad Bhāgavatam is described as sarva-vedetihāsānāṁ sāraṁ sāraṁ samuddhṛtam, or the cream of all Vedic literatures and histories of the universe. Next, and in reply to Śaunaka’s question about where dharma had taken shelter now that Kṛṣṇa had left for his own abode, Sūta Goswāmī replied that in Kṛṣṇa’s absence, the Bhāgavata will act as the sun in the age of Kali, providing light to the people of the world. In other words, Śrīmad Bhāgavatam will act as Bhagavān’s representative or proxy (pratinidhi), taking his place when he is absent from the vision of the world. The intended sense thus is that the Bhāgavata is nondifferent from Kṛṣṇa.

In terms of upasaṁhāra, in the very last chapter of its very last volume, the Bhāgavata puts its homily to rest by delivering a wonderful and profuse praise of its content,8 referring to itself in verses 12.13.12 and 12.13.15 as sarva-vedānta-sāraṁ—the essence of all Vedānta—and also labeling this Gauḍīya grantha-rāja in verses 12.13.16–17 as “the greatest (anuttamā) of all Purāṇas.” Finally, Śrīmad Bhāgavatam is beautifully portrayed and immortalized in verse 12.13.18 as the immaculate Purāṇa—śrīmad-bhāgavataṁ purāṇam amalaṁ. In this way, even while the Bhāgavata may have expressed some level of regard for Vedānta in some of its sections, the highest regard of the Bhāgavata goes to the Bhāgavata itself, as has been shown here.9

Another example of the Bhāgavata’s epistemological ultimacy—as well as the importance of establishing it as pramāṇa before trying to ascertain any type of Gauḍīya siddhānta—comes from Śrī Jīva Goswāmī, the tattva-ācārya of the Gauḍīya sampradāya. He has shown by his example how we are to establish any conclusive truth through the lens of the Bhāgavata in his monumental Ṣaṭ Ṣandarbha, by first establishing in the very beginning of his first Sandarbha (Tattva Sandarbha) how Śrīmad Bhāgavatam constitutes the topmost source of scriptural support in the whole Gauḍīya sampradaya. Like Śrī Jīva, Śrīla Sanātana Goswāmī passionately glorifies Śrīmad Bhāgavatam in verses 412–416 of his Kṛṣṇa-lila-stava where, among profuse and extended praise, he addresses it as “the nectar from the ocean of all scriptures,” (sarva-śāstrābdhi-pīyūṣa) “the singular fruit of all the Vedas,” (sarva-vedaika-sat-phala) “the rich mine of the precious gems of all conclusive truths,” (sarva-siddhānta-ratnāḍhya) “the life air of all the Supreme Lord’s devotees,” (sarva-bhāgavata-prāṇa) “the exact image of Śrī Kṛṣṇa,” (śrī-kṛṣṇa-parivartita) “whose every syllable pours down a flood of prema,” (prema-varṣy-akṣarāya) “you who are Śrī Kṛṣṇa Himself,” (śrī-kṛṣṇāya) and “my only friend, my constant companion, my spiritual master, my great wealth, my savior, my good fortune, my source of ecstasy!” (mad-eka-bandho mat-saṅgin mad-guro man-mahā-dhana man-nistāraka mad-bhāgya mad-ānanda).In this way, the Gauḍīya sampradāya has unequivocally established Śrīmad Bhāgavatam as its supreme pramāṇa based on what its very founder has said, of what the Bhāgavata itself has said, and, last but not least, of what the Goswāmīs have established along with their writings, all of which constitute another crucial aspect of the Gauḍīya’s epistemology due to them revolving exclusively around Śrīmad Bhāgavatam—the illustrious emperor of all scriptural evidence and crest-jewel of all epistemic hierarchy.

18 Responses to The Illustrious Emperor of All Scriptural Evidence