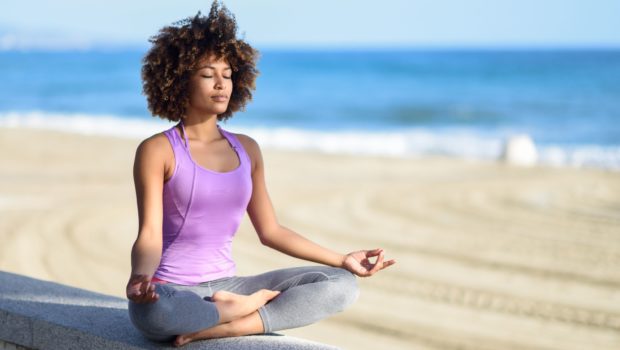 I was recently asked if there is a form of secular meditation that I could recommend. Considering the inquiry, I become more interested in the reasoning behind it than in the question itself. The question arises out of an understandable frustration with religion—its often dated and written-in-stone moral “laws,” its infighting, its lack of objectivity, and its metaphysics. But it also arises out of a sense that meditation has something to offer human society if it could be severed from its religious baggage.

However, meditation properly understood tends to already be light on religion. In classical India, meditation was an inquiry into the nature of consciousness by those who had already understood the essence of religious dogma and thus the underlying purpose behind religion’s moral codes. Meditation was to be embarked upon by those of not only good moral character (with a heart relatively free from desires/attachments) but also of the ability to distinguish between relative moral prescriptions and their ontologically grounded principles. Thus meditation’s moral underpinning was one that positioned a contemplative to determine morality with the ongoing application of reason relevant to time and circumstances. As a result, the mystic was not one burdened by religious law, nor was he or she immoral. The contemplative determined personal moral standards on the basis of accepting as moral that which proved favorable to meditation and rejecting as immoral that which did not. As an alternative, a purely secular morality is illusive at best. Proponents base such a morality on the belief that human life has inherent value, a stance that is no more empirically verifiable than one based upon a belief in God, as value itself lies beyond the purview of empiricism.

Meditation does not foster the kind of religious infighting that turns so many away from religion. While genuine meditative experience is varied, all such experience treads the common ground of ego effacement. It fosters a deep sense of unity with others giving rise to universal compassion. While practitioners experience nuanced differences that give rise to particular disciplines with distinct goals ranging from voidistic to theistic, the common ground of the interior experience is considerable Furthermore, all such inner experience also results in a largely unified response to the outer world, such as detachment from the temporal and compassion for sentient beings. This unifying experience, unlike a strictly religious orientation, does not lend to the kind of infighting and even violence we see among the religious, behavior that is not conducive to the practice of meditation itself. Indeed, ahiṃsā, or nonviolence, is a cornerstone to the moral foundation of the contemplative life. Meanwhile, secular life is no stranger to infighting, as one living being is food for another in the struggle for existence.

While both religion and mysticism are often considered entirely subjective experiences, meditation is at the same time an objective methodology, a science so to speak. It is an effort to understand the actual nature of consciousness as opposed to how one might like it to be. Thus it puts to rest the personal prejudices, emotional attachments, and partisanship that might cloud one’s inner perception of consciousness by obscuring objectivity. This is the same basic objectivity that underpins any truly scientific undertaking. Sensual restraint and stilling of the mind assist one in turning inward to understand and experience consciousness. Of course, here I speak of a theory-driven objectivity, an effort to verify the postulate of the sacred texts as to the enduring nature of consciousness. However, we should acknowledge that science is also theory-driven in its objectivity. Charles Darwin wrote, “How odd it is that anyone should not see that all observation [objectivity] must be for or against some view [theory] if it is to be of any service.” Even the process of observation within modern science is subject to subjective human bias. Aside from this bias, which can compromise objectivity in any undertaking, science itself has shown through quantum mechanics that the observer invariably influences that which is being observed. Thus Werner Heisenberg pointed out that science is no longer the study of nature itself, but rather the study of humanity’s “investigation of nature.” So if we are to look for a more comprehensive objectivity, we must look to something that transcends humanity’s inherent biases.

As for meditation’s metaphysics, what do they really say? While different traditions may have different metaphysical ideals, these ideals only create conflict when they have not been arrived at through the common foundational experience of meditation. Thus the idea of meditation is to rise above carnal drives—to control the mind and senses in a manner that appears superhuman, if not supernatural. Its ground is pure objectivity, which gives the necessary footing to climb the mountain of spiritually subjective experience. Such attainment is tantamount to a philosophical transcendence of death. It is an ego death to be sure. And if the material ego, or identification of self as American, Indian, male or female, black or white, Lutheran, Hindu, and so on is slain on the altar of meditation, we have reasonable philosophical grounds to say that self has died, while life of a different kind altogether continues on. In the words of Thomas Merton, “To renounce the pleasure of one’s dearest illusions about oneself is to die more effectively than one could ever do by allowing oneself to be killed for a clearly conceived personal ideal.”

So is there really a need for a secular form of meditation? Some may still desire one and attempt to strip meditation of its metaphysics for their purposes. But that raises the question as to whether such persons are actually practicing meditation at all. In the least, meditation is aimed at ego death, nothing less. Therefore one might argue that employing meditative techniques for something less than this is not meditation at all. And if ego death is objectively desirable, giving rise as it does to compassion and other universally sought qualities, why argue with the success arising out of a religious context? If light forms of religion have proven useful in helping to foster ego death and the deathless mystic experience, what is the need to discard them?

Talk of secular meditation is one thing, but we are still waiting for the first secular mystic to arrive, one who upon attaining ego death makes no metaphysical claims about the nature of the experience. Even though Zen Buddhism and Vipassana are sometimes thought to be forms of meditation that one can engage in without attaching any metaphysical beliefs to the process, there have been no Buddhists adepts to date who, upon attaining the Buddhist goal of enlightenment, have taught us that the ego death experience itself dies with biological death. Meanwhile, from the non-secular quarters, every adept to date has described his or her experience of enlightenment as one of transcending death as well as religion.