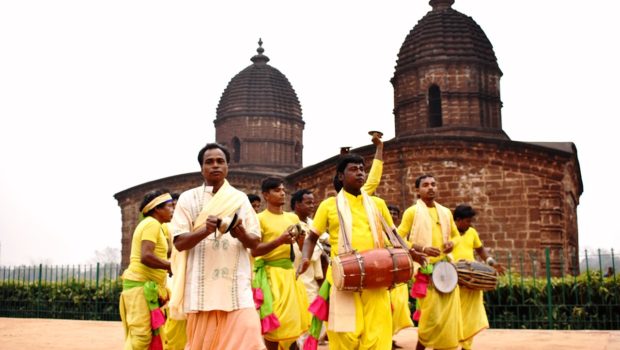 Kṛṣṇa is akhila-rasa-mūrti, the personification of all rasas. He is also a singer and dancer, naṭavara. Thus, He naturally loves to hear kīrtana. In Śrīmad Bhāgavata, kīrtana is praised as the best means to become free from material bondage and attain the supreme destination. Kīrtana of Kṛṣṇa’s pastimes is especially attractive to Him. Śrī Kṛṣṇa Caitanya Mahāprabhu is called the father of saṅkīrtana, Saṅkīrtana-pitā. He instructed about the proper mood in which kīrtana should be performed. In all the six Sandarbhas, Śrī Jīva Gosvāmi refers to Mahāprabhu twice. One such reference is in Anuccheda 269 of Bhakti Sandarbha, where he cites the famous tṛṇād api sunīcena verse. The translation of this anuccheda as well as my commentary is given below.

Additionally, in the following two verses [Śrī Sūta speaks about the importance of līlā-kīrtana]:

The word asatīḥ here means “false” (asatya), and asat-kathā, “speech concerned with the mundane,” means “that speech in which the discussions are concerned with those other than Bhagavān and His devotees.” The pronoun yat means “that speech in which” (yāsu gīḥṣu) Bhagavān Adhokṣaja is not described (na kathyate). On the other hand, that speech in which the glory (yaśaḥ) of Bhagavān Uttama-śloka is repeatedly sung (anugīyate), or in other words, that act of repeated singing (anugānam) that is filled with the descriptions of His līlās, is alone real (satyam) and endowed with the other virtues mentioned in these two verses. And why is this speech real (satyam) and auspicious (maṅgalam)? In answer to this, Sūta says that this speech causes Bhagavān’s qualities to be revealed in the heart of the singer. This means that such līlā-kathā-kīrtana induces divine love (rati) for Bhagavān.

In Skanda Purāṇa, it is said:

O King, Bhagavān Hari goes wherever stories about Him and His devotees are sung, just as a cow follows her calf out of great affection.

In Viṣṇu-dharma and Skanda Purāṇa (2.5.16.53), Bhagavān makes the following declaration:

I never abandon a person who always narrates My stories, nor one who is intent on hearing them, nor one whose mind is captivated by My stories.

It was said earlier:

Hearing of the most auspicious births and divine acts of Bhagavān Hari—the wielder of the disc—which are celebrated in this world, and singing His names denoting His birth and divine acts, one should roam about free from worldly attachment and inhibition.

Elsewhere it is said:

O King, one who sings, hears, or approves of the inimitable exploits performed here in this world by Bhagavān Hari [Śrī Kṛṣṇa], the source of the evolution, sustenance, and dissolution of the cosmos, attains loving devotion (bhakti) for Bhagavān, the refuge and bestower of liberation.

The import of this verse is that if one is unable to sing the līlās of Bhagavān, or if one encounters a devotee of a higher grade of realization, he should then hear those līlās from him. And if one is unable to do even this, he can at least approve of their being sung by others.

In Viṣṇu-dharma, we find this statement of Śrī Viṣṇu:

If one’s mind is naturally lyrical and thus captivated by melodies, one should fix the mind on Me and sing My virtuous stories.

In the Kārtika-māhātmya of Padma Purāṇa, Śrī Bhagavān said:

I reside neither in Vaikuṇṭha nor in the hearts of the yogīs. O Nārada, I remain wherever My devotees sing [my līlās]. When people worship these devotees by offering them scents, incense, and other articles, I am supremely pleased by such worship. I do not derive the same pleasure even from My own worship.

By singing the līlās of Bhagavān, such devotees are supreme benefactors of all living beings, to say nothing of the benefit they themselves receive. Śrī Prahlāda makes this point in Nṛsiṁha Purāṇa:

O Nṛsiṁha, those saints who loudly sing Your names in bliss are the unconditional friends of all beings.

In this regard, Bhagavān Śrī Caitanya, who avatārically appeared to deliver the living beings of Kaliyuga, has given the following instruction about the congregational singing of Bhagavān’s names (nāma-saṅkīrtana):

Considering oneself to be even lower than a blade of grass, being more tolerant than a tree, being prideless, and offering respect to all others, one should continuously sing the name of Hari.

After describing the singing of Bhagavān’s pastimes (līlā-kīrtana), Śrī Jīva Gosvāmī explains the importance of singing in general, be it of His name, form, qualities, or pastimes. The essence of all devotional practice is remembrance of Kṛṣṇa, as stated in Padma Purāṇa: “One should remember Bhagavān Viṣṇu always and never forget Him even for a moment. All the rules and prohibitions of scripture are servants of these two principles alone” (PP 6.71.100). Śrī Nārada instructs King Yudhiṣṭhira in a similar manner: “Therefore, one should fix one’s mind on Kṛṣṇa by whatever means possible” (SB 7.1.31). Fixing the mind on Kṛṣṇa or remembrance of Him, however, is not possible if the mind is unstable. The practice of controlling one’s speech is a powerful means to stabilize the mind. In this respect, Śrī Sanātana Gosvāmī advises:

The faculty of speech is the regulator of all the senses, both external as well as internal. If it is brought permanently under control [either by observing a vow of silence or by bhagavat-kīrtana], then the mind becomes stable and then only can one be wholely engaged in continuous remembrance of Bhagavān. Consequently [because remembrance (smrti) is the sādhya, or the object to be attained by kīrtana], remembrance (smrti) itself is the fruit (phalam) [of kīrtana].

Speech can be controlled either by observing a vow of silence (mauna) or by engaging it in japa or kīrtana. The first option is followed by yogīs and jñānīs, and the second, by devotees. The second method is superior, because it engages one’s entire being in the service of Bhagavān and purifies one’s existence. It is also the method prescribed for the present age, as pointed out earlier. Moreover, it should be noted that saṅkīrtana is not merely an instrument to be given up once the goal of remembrance is attained. It continues even after reaching the perfected stage. A perfected devotee naturally engages in kīrtana as an anubhāva of love (SB 11.2.40, and SB 1.6.27).

Good music has a special power to attract our minds. Singing attracts the mind of the singer as well as that of Kṛṣṇa. For this reason, Kṛṣṇa says that He is present wherever His devotees sing about Him. He is a musician Himself and thus loves to hear singing performed out of love. When many devotees come together and sing with the proper melody (rāga),rhythm (tāla), and tempo (laya), it creates a very enchanting and beatific atmosphere. This has a powerful influence on those who sing as well as those who listen to it. Śrī Jīva therefore recommends that if one has a melodious voice, one should sing bhagavat-kīrtana. If possible, one should sing in the company of devotees who have good knowledge of music, sweet voices, and who share the same devotional mood.

Śrī Caitanya Mahāprabhu specifically recommended and propagated saṅkīrtana for the present age. He demonstrated it by His own life. In the Śikṣāṣṭaka verse cited at the end of this anuccheda, He describes the proper internal state in which saṅkīrtana should be performed. Saṅkīrtana performed in this manner can bring peace and harmony in society. At present, life is filled with strife (kali) in all spheres, be it family, society, or country. Love is scarcely to be found among the members of families, society, or country. The only solution is to perform saṅkīrtana in the mood recommended by Mahāprabhu. This will purify the heart of envy, jealousy, hatred, greed, and anger. According to sage Karabhājana, saṅkīrtana is the prescribed process for the present age (SB 11.5.32). He further says that all success can be obtained merely by saṅkīrtana (SB 11.5.36).