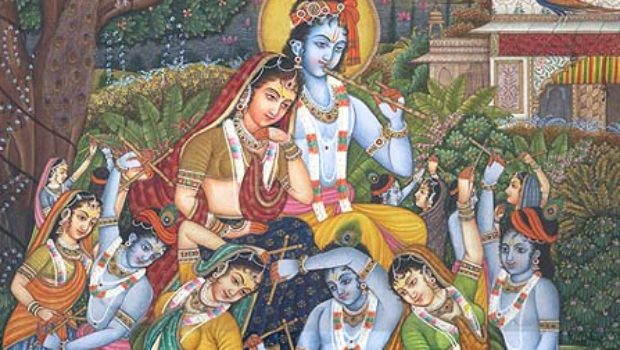 By Bābājī Satyanārāyaṇa Dāsa, originally published by the Jiva Institute.

Question: Śaivites in my circle claim that Lord Kṛṣṇa worshipped Lord Śiva to get a son, who was named Sāmba. Is this true?

Answer: It is true. Rāma worshiped Śiva before building Rāma Setu. Similarly, Śrī Kṛṣṇa worshiped Śiva to get Sāmba. This is their nara-līlā. They are playing the role of human beings. Just because Rāma and Kṛṣṇa worshipped Siva, it does not make Them lesser than him. God does not lose His position by worshipping anyone.  Śrī Rāma and Śrī Kṛṣṇa also gave respect to Their parents and were obedient to them, but this does not make the parents superior to Them. So who is God and who is not God has to be understood from śāstra and not simply from who is worshipping whom. Śrī Kṛṣṇa is driving the chariot of Arjuna, so ordinarily, a chariot driver is inferior to the owner of the chariot, but it does not diminish Kṛṣṇa’s position. He is even called Pārtha-sārathi, the driver of Arjuna. He is also called a devotee of His devotee, Bhagavān bhakta-bhaktiman.

Question: I read in Bhagavat Sandarbha that Kṛṣṇa’s body is all-pervading. I had also read elsewhere that it is Paramātmā who is present everywhere—in the atoms and in the hearts of every living entity. Do Kṛṣṇa and Paramātmā both exist everywhere?

Answer: Yes, but they are not ontologically different. Keep in mind the acintya-bheda-abheda concept. Not only Kṛṣṇa’s body but Rāma’s body and the bodies of all Viṣṇu avatāras are all-pervading.

Question: Is it actually Kṛṣṇa who exists everywhere but some see Him as Paramātmā? I am trying to understand the difference between the all-pervasiveness of Kṛṣṇa and Paramātmā, respectively.

Answer: It depends on the concept of the sādhaka. The reality manifests as per the bhāva of a sādhaka—as Kṛṣṇa says in Gītā, “ye yathā māṁ prapadyante” (Gītā 4.11). Those who are not devotees, for them it is only Paramātmā who regulates the material nature, but for a devotee, depending on who is the presiding or worshipable deity, that particular deity is all-pervading and takes the role of Paramātmā. So for Kṛṣṇa-bhaktas, it is Kṛṣṇa who is all-pervading, for Rāma-bhaktas it is Rāma, etc. The Absolute Reality has various facets and manifests in a particular manner to a sādhaka. It is like a holographic picture, which appears differently when viewed from different angles.

Question: Kṛṣṇa says in Gītā 10.42, “ekāṁśena sthito jagat.” Does this mean that Kṛṣṇa pervades as Paramātmā and as Himself as well?

Answer: Yes, ekāṁśena refers to Paramātmā. As mentioned previously, Kṛṣṇa, Paramātmā, and Brahman are all-pervading. That is the very nature of the tattva. But a sādhaka experiences the tattva as per one’s inclination and sādhana.

Question: In Kṛṣṇa Sandarbha, it is stated that the Lord takes the Virāṭ Puruṣa into His belly and lies down in the Garbhodaka ocean. Later, it says that the system of planets meditated upon as Virāṭ Puruṣa is an imagination.

Is there a universal form or is it simply imagined by the yogīs for the purpose of meditation? Is this system of planets imaginary, but the other universal forms—such as in the Gītā or the one showed to Yaśodā—are real, although temporary?

Question: Is the story of Kṛṣṇa observing women bathing a later interpolation? Such behavior is unbecoming for the Supreme Puruṣa. He Himself teaches in the Gītā that leaders must be careful of their actions, as others emulate them. Additionally, noblemen like Bhiṣma, Gargācārya, Sāndīpanī, Dhruva Ṛṣi, Pānḍavas, Karṇa, Sañjaya, Vidura and many others agreed that Kṛṣṇa was Brahman in human form.

Answer: If Kṛṣṇa is Supreme Brahman, then what problem does it create if He observes women bathing? He is inside and outside of the bathing women. What is hidden from Him? He can create millions of women. When Indra sent Kāmadeva with his apsarās to disturb the mind of Nara-nārāyāṇa Ṛsi, He laughed at them and created Urvasī from His thigh and then gave her to them as a gift for Indraa

You must first decide if you accept Him as Supreme Brahman or not. You are speaking from both sides of your mouth—you prove Him to be Supreme Brahman and then you are disturbed that He saw women bathing. This is incongruent.