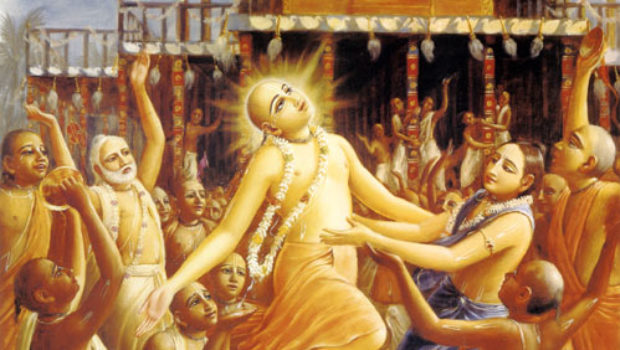 With the public, the Lord performed nama-sankirtana, and with His intimate associates, He tasted rasa.

Seeing the golden luster of the Lord’s sannyasi form, I will fall to the ground and longingly gaze at him like the gopis, who cried remembering the Yamuna upon seeing Sri Krishna of Dvaraka in the garb of a king.

I want to take Gaurachandra back to Mayapur, where his youthful dress, dhoti tucked in three places, and wavy hair shine on his divine form, where he performs pastimes in the garden with the devotees.

In truth, Gaurachandra is this sannyasi, I am his servant, and this appearance of the Lord is one of his infinite Pastimes. Still, my heart longs to take the Lord back to the home of Srivas on the bank of Prthu Kunda.

One Response to Returning to Srivas Angan