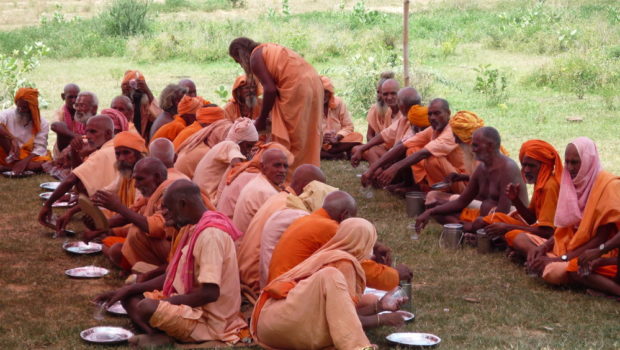 The Importance of Sādhu Seva

By Bābājī Satyanārāyaṇa Dāsa, originally published by The Jiva Institute.

In Anuccheda 238 of Bhakti Sandarbha, Śrī Jīva Gosvāmī describes the importance of service and association with Vaiṣṇavas. Citing the statements of Śrī Kṛṣṇa to Uddhava, he shows how sādhu-saṅga captures the heart of Śrī Kṛṣṇa. Incidentally, he also talks about how to deal with a situation if one has accepted an unqualified guru. Below I present the translation of the beginning part of this Anuccheda and my commentary on it.

Guidelines for Associating with Vaiṣṇavas

With the permission of one’s guru, it is beneficial (śreya) to render service to other Vaiṣṇavas as well, provided it doesn’t conflict with the service to one’s own guru. Otherwise [if undertaken without the consent of one’s guru], such service will be flawed, as confirmed by Śrī Nārada:

One who worships someone else first in the presence of one’s guru attains an unfavorable result, and his worship of Bhagavān is rendered futile.

The characteristics of an authentic guru have already been discussed [in Anuccheda 202] in verses such as this:

Therefore, a person who is profoundly inquisitive about the ultimate good should take shelter of a preceptor who is deeply versed in the sound form of Brahman [the Vedas], who has directly realized the transcendental Brahman, and who has thus become a veritable abode of inner tranquility.

A person who, in the beginning, fails to accept a guru of this caliber and whose guru, out of envy, does not permit him to honor and serve highly realized devotees of Bhagavān, has disregarded śāstra from the very outset [by accepting an unqualified guru], and hence śāstra doesn’t even consider his case. Calamity certainly befalls such a person on both accounts [because if he follows the order of his guru, he fails to honor the great devotees, and if he honors the devotees, he disobeys his guru]. With this in mind, the Nārada-Pāñcarātra states:

Both the person whose instructions are not in resonance with scripture and the one who hears such illegitimate teachings proceed to a dreadful hell for an unlimited period of time.

Therefore, such a guru should be respected only from a distance. And if he is inimical toward Vaiṣṇavas, he should certainly be given up, as stated:

It is ordained that a guru who is self-conceited, who does not know what is to be done and what is to be avoided, and who has stumbled down the wrong path is to be given up.

Furthermore, such a guru cannot be considered a Vaiṣṇava, because he lacks the character of a Vaiṣṇava, and thus the following admonition is given with such a guru in mind:

If, however, an authentic guru endowed with the characteristics described earlier is no longer present, then regular service to a highly realized devotee (mahā-bhāgavata) is most beneficial. Furthermore, the mahā-bhāgavata whose association one partakes of should have the same devotional regard (sama-vāsanā) as that of his guru, and he should be compassionately disposed toward oneself. This principle is enunciated in Hari-bhakti-sudhodaya:

It is essential to accept the association of a mahā-bhāgavata who is compassionate toward oneself because if he is not compassionate, one will not develop affection for him in one’s heart.

Two Kinds of Service to Mahā-bhāgavatas

Of these two, service in the form of association (prasaṅga) is as spoken of by Śrī Kṛṣṇa:

Neither [aṣṭāṅga] yoga, nor sāṅkhya [i.e., the discernment of the self (ātmā) from all the empirical categories of nonself (anātmā)], nor dharma [i.e., universal morality, such as the attitude of nonviolence and so on], nor study of the Vedas (svādhyāya), nor voluntary penance (tapa) and the life of renunciation (tyāga, i.e., sannyāsa), nor fire sacrifices (iṣṭa, i.e., agni-hotra) and works of social welfare, such as excavating wells and ponds (pūrta), nor charity (dakṣiṇā, i.e., dāna), fasts (vratāni), worship of the devas in ritual ceremonies (yajña), uttering secret mantras (chandāṁsi), visiting holy places (tīrthāni), nor observing ethical codes (niyama) and moral restraints (yama) can bring Me under control (avarundhe, i.e., vaśī-karoti) in the same manner as does the association of true devotees (sat-saṅga), which dispels all other attachments.

Śrī Jīva Gosvāmī raises an important point about the qualification of a guru. He says that the guru must embody the characteristics that are approved by the śāstra. If a disciple has accepted an unqualified guru, there is every possibility that he will end up committing offenses to other devotees. The unqualified guru, for example, may be envious of other elevated devotees and may prohibit his disciples from offering respect or service to them. What should a disciple do if faced with such a quandary? If he offers respect to the elevated devotees, he disobeys his own guru, and if he does not offer respect to such devotees, he commits an offense toward them. This is like having to choose between jumping into either a pit of snakes or a ring of fire.

Śrī Jīva says that the śāstra does not even consider such a situation as worthy of discussion. This is due to the fact that the disciple has transgressed the śāstra from the very outset by accepting a guru who is not approved by śāstra. This can be compared to two thieves who steal from a house and then have a disagreement over the division of the stolen goods. To help them settle the dispute in an egalitarian manner, they then approach a judge. But what sort of legal settlement could the judge possibly propose to those who have broken the law in the first place?

Out of compassion, however, Śrī Jīva Gosvāmī offers a solution to such a disciple. He advises that one should not associate with such a guru. The disciple can offer respect to the guru from afar and may continue to accept him as his guru. If, however, the guru is envious of other devotees, then he must be rejected, and the disciple must accept another qualified guru. Śrī Jīva cites a verse from Mahābhārata to support his conclusion.

Normally in śāstra, we find statements that praise the guru and that instruct the disciple to honor the guru as Bhagavān Himself. These verses are aimed at a genuine, qualified guru. But if the guru is unqualified, he will not serve the purpose of uplifting the disciple. For this reason, he must be rejected in favor of a qualified, genuine guru. Śrī Jīva is also very clear in stating that only a Vaiṣṇava can be a guru, not a Śaivite or a Śākta. By Vaiṣṇava he means one who has vaiṣṇava-bhāva, otherwise, he deems a so-called Vaiṣṇava devoid of vaiṣnava-bhāva as avaiṣṇava—tasya vaiṣnava-bhāva-rāhityena avaiṣṇavatayā …

What should a student do if the guru leaves his body and the student is not advanced enough to continue on his own? Śrī Jīva Gosvāmī replies that such a student should seek a qualified Vaiṣṇava for guidance. There is no need to take mantra-dīkṣā again. The student can learn philosophy and the practical details of practice from such a Vaiṣṇava. Śrī Jīva recommends that the Vaiṣṇava with whom one chooses to associate should have the same philosophical understanding and devotional mood as one’s guru. Otherwise, there will be confusion in the mind of the student, who may commit an offense to his guru by going against his teachings and mode of practice. In this context, Śrī Rūpa Gosvāmī also makes the following recommendation:

One should associate with a Vaiṣṇava sādhu who belongs to the same spiritual lineage, who is sympathetically disposed, and who is more advanced in realization.1

Moreover, the Vaiṣṇava teacher must be compassionate toward the student. If he is not compassionate, he would not bother to teach, nor would the student be able to develop affection for him.

As far as service is concerned, it can be rendered to any Vaiṣṇava. A student should imbibe the mood of service. Service should be carried out in correspondence to the status of the Vaiṣṇava. Service does not always mean engaging in acts of personal benefit to the Vaiṣṇavas. Even to greet a person appropriately is service. After all, students have their own regular duties and spiritual practice to attend to. They are not free to offer personal service to every Vaiṣṇava they encounter. But the idea is to satisfy everyone by the nobility of one’s behavior. As far as possible, highly realized devotees (mahā-bhāgavatas) should be served either through physical presence, by hearing and taking instruction from them (prasaṅga), or by rendering some personal service to them (paricaryā).

Service to Vaiṣṇavas gives Kṛṣṇa the greatest pleasure, so much so that it brings Him under control, which means that the devotee directly attains Him. This message is the essence of this anuccheda concerning sat-saṅga. Moreover, this is the supremely confidential truth (parama-guhya-tattva) that Kṛṣṇa promised to disclose to Uddhava2. The two verses quoted here3 contain the secret that Kṛṣṇa just previously referred to. As the 12th chapter of the Eleventh Canto proceeds, Kṛṣṇa elaborates many different grades of living beings who attained perfection merely through the association of Vaiṣṇavas. This is just to emphasize the power of sat-saṅga, testifying further to its supreme confidentiality.