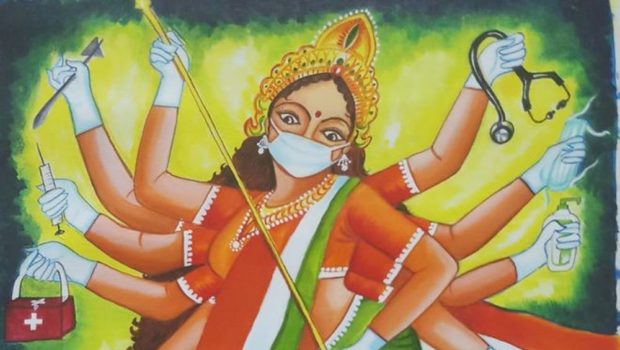 The Worship of Corona Mata

MUMBAI (RNS) — As the first wave of COVID-19 spread through India last June, Anilan Namboothiri, a resident of the southern state of Kerala, set up a new idol in his home shrine that he honors as “corona devi,” or corona goddess: The unusual polystyrene figure, resembling the spiky COVID-19 protein, found its place alongside established Hindu deities such as Krishna and Shiva in the 48-year-old journalist’s shrine.

“In ancient times, contagions were attributed to the wrath of goddesses… that needed to be propitiated,” said Namboothiri in Malayalam. “The message I wanted to send people is that you can stay at home and worship god. God exists everywhere.”

Across India, people are worshipping female divine forms of the coronavirus, variously called “corona devi,” or by other forms of respect such as “corona mata” (corona mother) or “corona mai.” Incidents of idol worship or rituals to a coronavirus-inspired female deity have been reported from the southernmost states of Karnataka and Tamil Nadu to Uttar Pradesh, Jharkhand and Bihar in the north and Assam in the east, all apparently springing up organically and unrelatedly.

“Since there is no one central authority to decide when and how to add new deities to the Hindu pantheon, it happens on its own whenever and wherever the need arises from the society,” said Pankaj Jain, professor and head of Indic studies at FLAME University in Pune. “Goddess worshipping is an ancient tradition in Hinduism in India, Shinto in Japan, and many other indigenous traditions worldwide. When people feel the need for motherly love and care, they turn to goddess worshipping.”

India is seeing a deadly second wave of the pandemic, which has claimed at least 388,000 lives there since it began. Though the country is beginning to open up, lockdowns over the past months have seen places of worship remain closed. Some have decried the populace’s turn to religious superstitions, medical quacks, and holy men even as many disregard a need for masks and fail to social distance during some ritual gatherings.

India has a history of worshipping female divinities during times of disease outbreaks. There have been goddesses of plague, smallpox, and cholera through the past centuries.

“In earlier times during contagions, when even doctors gave up hope, people used to turn to goddesses and home remedies,” said Anand Bharathi, manager of a temple in the southern state of Tamil Nadu, where a new corona devi idol was consecrated last month. “They believed the intensity (of an outbreak) was brought down with worship.”

Daily prayers are being conducted by the temple authorities over a 48-day period, though the temple itself remains closed to the public due to the possibility of spreading COVID-19.

In a village in Uttar Pradesh, India’s most populous state, a shrine with a masked goddess idol was erected this month but was demolished within a few days. There were some claims that the temple was built on disputed land as an effort to claim the property, but even during its brief life, people visited to pray for deliverance from the disease.

“Someone thought of this, and people started to gather in the name of god,” said Amitab Shukla, a former head of the village. “Perhaps, because in the (local) language coronavirus was assigned a female gender, for people she became a goddess,” Shukla said, adding that, in times of stress, people sought divine intervention despite the fact that the village had grown to trust modern medicine.

In Kerala, Namboothiri explained the nuance of his honoring his corona devi. “I believe in god, but I want society to undo their misconceptions around worship,” he said. “I believe in science and medicine. Prayer alone will not help. But I pray to the goddess to give strength and support to scientists and frontline workers.” He plans to immerse the idol in the ocean once the pandemic ends.