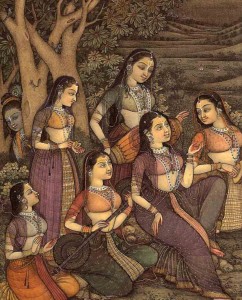 Radharani’s supreme love, which she alone tastes, is such that Krishna himself yearns to taste it. One may, however, justifiably question how Krishna can lack anything. How can the Absolute be incomplete? The an­swer to this question can be found in the philosophy that un­derlies Krishna lila. Krishna is full in himself, yet he is full of love, and love is never satisfied with itself. To taste himself more fully he manifests as two—Radha and Krishna. As the sruti proclaims, ekaki na ramate: “Alone one finds no pleasure.”1 That which resides within Krishna in an abstract sense as his inherent hladini-sakti manifests externally in a concrete form as Radha. These two, rasa and prema, are in essence one. Krishna is rasa and Radha is prema. One has little meaning without the other. Rasa is the highest taste and prema is the means of tasting it.

Radha and Krishna’s love is a transformation of hladini-sakti. On earth, the one, Krishna, has become two, Radha and Krishna, eternally. Then, as Gaurasundara, these two formed a dynam­ic unity. Pranama to Gaura, who is endowed with Radha’s countenance and personality.3

Thus the necessity of stealing arises in Krishna’s mind. There is no other option. Krishna concludes that he must steal Radha’s prema if he is to taste it, and taste it he must, because he knows that it is superior to anything he has tasted. Whatever embar­rassment stealing her love may bring as a consequence, Krishna knows that true supremacy lies in tasting love—love is su­preme. Furthermore, just as Radha wants to see him glorified, he wants to see her glorified. Despite his being a thief, he is the Supreme Truth. Truth be told, while most teach that God is the most worshipable object, Radha is the worshipable ob­ject of God. Thus Krishna tries to steal Radha’s prema to tell the world the truth. Although he is purnananda-maya, completely filled with joy, and cin-maya purna-tattva, the complete spiritu­al truth, the fact is that her love drives him mad. (Sri Caitanya-caritamrita 1.4.122)) Jaya Radhe! Jaya Gaurahari!

This article is excerpted from Siksastakam of Sri Caitanya.