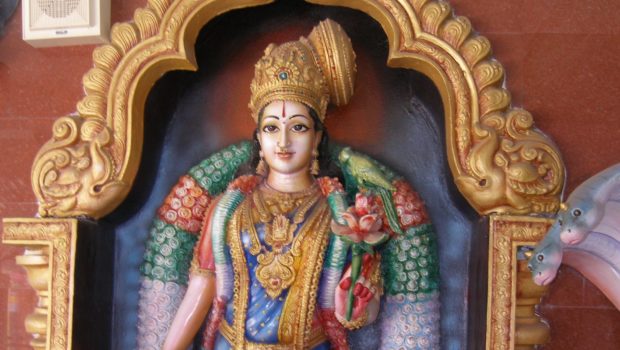 The bhakti “movement” of medieval India was theorized by the 19th-century colonial missionaries and historians as akin to the Protestant movement in Europe, as shown by Michael Blake (1992).1 Through the protestant framework, bhakti was viewed as ethical, egalitarian, and monotheistic, among other things.

Though this framework has been critiqued as orientalist, it continues to be used in so far as scholars view bhakti as at least egalitarian. Why? How? What then should be the position of a non-orientalist appraisal of medieval bhakti?

To probe these questions, let us look at Andal, the only woman among the Alvar saints hailing from the 9th-century South Indian region of current Tamil Nadu. Specifically, we examine Andal’s femininity and what is perceived as her transgressiveness.

As a baby, Andal or Godadevi was found in a garden by Vishnuchitta (also known as Periyalvar), a temple priest in Srivilliputtur. Vishnuchitta brings her up as his own daughter. As a young girl, Andal tries out garlands meant for the temple deity, thinking they must first look beautiful on her if they are to look beautiful on the deity.

One day, Vishnuchitta catches her doing this and admonishes her, for unworn and pure flowers must be offered to Hindu deities. But soon thereafter, the deity appears in Vishnuchitta’s dream and insists that he wants only those garlands tried out by Andal.

Andal’s devotion is so deep that she asks to be married to Ranganatha, a form of Vishnu at Srirangam, when she grows up. Upon marriage, she merges completely with her beloved deity, leaving no traces behind. Andal means ruler, a reference to her self-mastery.

Andal composed two works – Tiruppavai and Tirumozhi. She is hailed as a goddess and is one of the twelve Tamil Vaishnavite Alvar saints of medieval India.

The Tiruppavai is sung in the month of Margazhi in temples and homes. The story of Andal is deeply moving. Andal’s innocence, sincerity, and perseverance as well as her strength are remarkable.

The Egalitarian Theory of Bhakti

The egalitarian theory of bhakti, a corollary of the protestant theory of bhakti claims that women and “lower” castes were given greater space to express themselves, that women saints were proto-feminists, that the bhakti saints were critical of ritualistic practices, rejected institutionalized forms of religion, rejected the Vedas, Sanskrit, and brahminism, challenged power and hierarchy, questioned the sexual and gender norms or streedharma of their time, allowed for direct access to God, were social reformist and rebellious.

This theory has been challenged in my previous work, which focused on the Virashaivabhakti of 12th century Karnataka, a project that began in 2003.2 Here, we extend the analyses to Andal.

In Kannan (2014), I argued that there were too many anomalies in the egalitarian theory of bhakti and that contradictory evidence in the vachanas had been overlooked, while selective readings had been used to construct and justify it.

Does Andal’s life offer no potential to be interpreted through the egalitarian theory of bhakti? Indeed, it does—for instance, her rejection of marriage to a man. However, there are other facts of her life that go unexplained if we accept the egalitarian theory. For example, her upholding of streedharma, her reverence for brahmins, the Vedas and so on.

Commitment to the egalitarian theory of bhakti is essentially distortive. It forces historians to interpret the original works of the bhaktas and the later hagiographies along the polarized axes of where the bhaktas were egalitarian and where they were not, while suggesting the latter as exceptions.

Hence, scholars express anguish, surprise, and disappointment at the positions taken by the bhaktas, which from their lens appears paradoxical and conflicting.

For some scholars, bhakti had great potential but did not fulfill its promise of a complete social revolution. For others, it represents an “inadequate questioning of tradition” and tradition’s foundational concepts, including patriarchy (Neera Desai, 1994, 15).

For yet others, women saints “challenged the institution of family,” as suggested by Sumitrabai in her analysis of Akka Mahadevi’s devotion (1997, 71) and bhakti was largely positive for women and other marginalized people.

In a number of readings, what goes unnoticed is that “expectations” out of medieval bhakti have been derived from anachronistic readings of the period rather than available textual evidence. This is especially true of feminist reclamations of the bhakti saints who recover women from the past in order to cater to the strategical and political needs of enabling and inspiring the women of today.

Feminist scholars often work backward from the premise that all religions and cultures were fearful of female sexuality and necessarily subjugated women. Madhu Kishwar characterizes the problem with such scholarly readings well: “Their (feminists at a certain seminar) argument was that these women (bhaktas) did not talk of women’s independence and equality as they ought to have, that they merely chose to substitute the slavery to a husband with slavery to a god” (1990, 4).3

That is, egalitarian readings of bhakti, whether glorifying the so-called social reform, or, rejecting and apologizing for an incomplete social reform, are reductive and instrumentalist uses of history rather than objective studies.

The egalitarian theory of bhakti produces circularities. It allows for the construction of the historical world of the bhaktas as patriarchal to suit the theory. The logic is that it must have been patriarchal since the bhaktas rebelled against it.

The rejection of worldly life by the bhaktas is seen as a direct result of patriarchy and a selection of bhakti writings indicating such rejection are cited as evidence. However, bhakti’s rejection of the world is characteristic of the ascetic tradition within Hinduism.

This larger context is missed too often. Consider, for instance, the fact that the 13th-century hagiographies of Mahadevi by Harihara and Chennabasavanka describe her as being born after her parents earnestly prayed for a girl-child (cited in Sumitrabai, 1997, 17).

This criterion is neither met with, in the case of Mahadevi nor in the case of Andal. In the case of Andal, we see Vishnuchitta, Andal’s father, expressing much grief at the loss of Andal: “I only had a daughter and goddess-like. I brought her up: the fair eyed god has taken her” (cited in Meenakshi C, 1989, 35).

Also, medieval bhakti saw many women ‘convert’ their husbands into their understanding of bhakti, as queens as well as ordinary women. And, in the gleaner couple Aydakki Maramma and Marayya, we witness a reflective living that we see between Rama and Sita in the Ramayana, where Sita reminds Rama of his duties and the good conduct expected of him.

In the life of Andal, we see her convince her father to a marriage with Vishnu. No mean task since her marriage procession begins at Srivilliputtur and concludes at Srirangam.

Histories that ignore such hagiographical and historical evidence also argue that “[m]any women who were otherwise marginalized as social rejects found acceptance and solace through religious involvement” (Usha V T, 2007, 58).

But such arguments must be rejected as inadequate explanations. As Arvind Sharma concludes his study on why women joined the sangha, there is a need to recognize the “autonomous quality of religious behaviour.” (1977, 250), That is, in the egalitarian theory of Bhakti and its allied understandings, patriarchy is what drives women to seek religion or God so that they can then strive for egalitarianism, but a more complete understanding suggests that the bhaktas were practicing a form of asceticism wherein they rejected worldly attachments and adopted a sense of filial attachment with the Gods, deriving their vocabulary from the householder tradition.

The egalitarian theory of bhakti also unnecessarily complicates the autonomous nature of the bhaktas’ self and agency and in its readings, the same set of actions are read as agentic and subversive or as non-agentic and submissive, with no criteria to discerningly rule out the opposite reading.

This article was originally published at Indica Today and is partially reproduced here without the permission of the author, who is not affiliated with this website or its views.

One Response to Rethinking Femininity and Transgression in Andal’s Bhakti