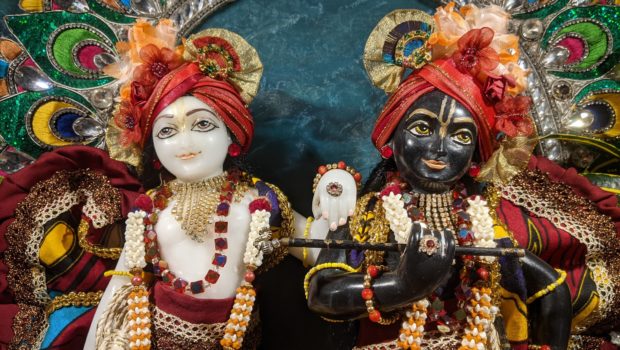 Bhagavan’s Presence in the Murti

In the beginning, we depend upon śraddhā. Although Bhagavān has a form, His form has characteristics that defy material laws. He remains unlimited even while having form. And this is what Kṛṣṇa demonstrated in His Dāmodara līlā, when Mother Yaśodā was trying to bind Him. Every rope was too short to tie the little boy, who was standing in fear in front of her. So although He had a seemingly limited form, it was not limited.

The qualities of Bhagavān are beyond logic; they defy all material laws which we experience in our lives. To inform us of this, the Upaniṣads make statements such as tad ejati tan naijati, “He walks and at the same time He does not walk.” Because He has a form, He can walk. But how can He walk if He is all-pervading? Walking involves moving from point A to point B, which implies that you are not at B when you start from A. But if you are at A, also at B, and also at C, and indeed everywhere in space, then how will you walk? So the Upaniṣads say, tad ejati tan naijati tad dūre tad vantike, “He is very far and He is the closest.” He is so far that you can go on searching for Him, but not find Him anywhere. And yet He is the closest to you because He is inside your heart. Even the dearest friend, girlfriend or boyfriend, or husband or wife cannot be inside the heart. They remain outside. Poetically, you may say that someone is in your heart, but physically they are outside.

Bhagavān is simultaneously very far and very close; He walks and He does not walk; He has a form but He is limitless. He creates but He also destroys. Bhagavān is beyond duality. He is the source of everything, yet He Himself has no source. Both good and evil come from Him. It is not that evil comes from elsewhere else and only good comes from Him. For Him, there is no difference between good and evil.

Good and evil are relative terms. At the level of the Absolute, everything is absolute. We impose our material experience on God; therefore, His mūrti appears limited to us. To understand God, we have to depend upon śāstra. And to understand śāstra, we have to have śraddhā. Śraddhā means to trust in the meaning of the words of scripture.

In Bhagavad Gītā (4.11). Śrī Kr̥ṣṇa says, “As you approach Me, I reciprocate with you in the same way” (ye yathā māṁ prapadyante tāṁs tathaiva bhajāmy aham). So if we approach God with a material concept, then He will appear to us as material. If you think that God has no form, then He will not manifest His form to you. Indeed, if you believe that there is no God, then God will not impose Himself onto you; nor will He force you to believe in Him. In fact, He will present Himself to you in a such way that you won’t have to believe in Him at all. Therefore, nonbelievers have their own logic and belief that there is no God. God creates situations and gives experiences to them so that their disbelief is confirmed. Similarly, for those who accept from śāstra that God has a form, He can manifest Himself to them. If you think that Bhagavān has a limited form, then He will make your belief firm.

The mūrti is a form of God but if we do not believe in it, then it will only appear material to us. There is a story to illustrate this effect. There was a king who had four sons. He became old and wanted to relinquish his duties to one of his four sons. But he wanted to give his position to someone who was devoted and obedient to him and who respected him. Only such a person would take care of the citizens as the king desired. To discover who actually had love for him, the king devised a plan. One day, he acted as if he had fallen sick. All of his sons came to take care of him. Then the king pretended to have fallen into a coma, to see how the sons would react in this situation. He heard three of the four sons talking to each other very happily, planning how to enjoy the kingdom after his death. As they discussed among themselves, they assumed that the king could not hear them. The fourth son, however, was taking care of the father. This son was only worried about how he could bring the king back to consciousness. He called for doctors and was massaging the body of the king himself. The other three were hoping that the king would die but to their surprise, after some time, the king opened his eyes. The three sons panicked at his unexpected revival. Thus, the father understood which son was actually qualified to be the king.

This is also what God is doing. He comes in the form of the mūrti and stands as if He were paralyzed, yet He is observing everything. He wants to see how you treat Him and what your mood is toward Him. He reciprocates accordingly.