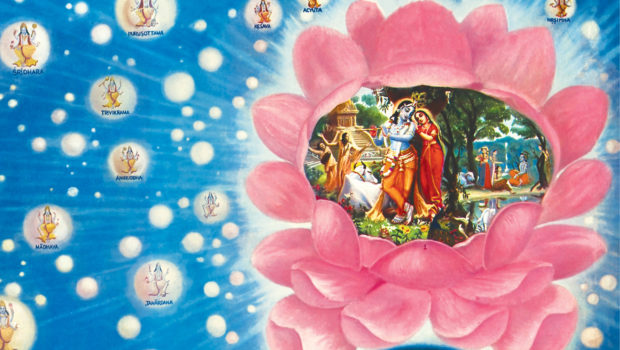 The sun of prema-bhakti is the essence of Bhagavān’s internal potency. When a ray of that sun illuminates the heart of a devotee, that devotee attains bhāva-bhakti,1 which is very rarely achieved.2 The experience of bhāva-bhaktas (and prema-bhaktas) makes the joy of sāyujya-mukti, the felt sense of merging into the Brahman feature of the Absolute, small and light in comparison.3 Just as the liberated have no interest in material enjoyment, the bhāva-bhaktas have no interest in liberation.

We who are novices on the path chalked out by prema-bhaktas should be careful not to parrot them mindlessly or imitate their actions and mindset in shallow ways. Keep in mind that when a highly realized devotee denigrates Brahman realization, they are doing it from the vantage point of someone whose heart has been softened by bhāva with desires to meet Bhagavān, serve him favorably, and attain an affectionate relationship with him. They are horrified by the thought of losing the opportunity to experience a reciprocal relationship with their deity. To them, such a state is like hell or worse.4 They also feel compassion for those who have lost the potential to attain prema-bhakti, considering their aspirations for sāyujya–mukti to be spiritual suicide. When a novice denigrates Brahman realization, however, that may very well just be out of fanaticism.

Here we need to remember that although sāyujya–mukti is small in comparison to bhāva–bhakti, it is a real and tangible attainment for those who honestly aspire for it. Making this point is not contrary to uttama-bhakti. Rather, it is a glorification of uttama–bhakti because if we have sambandha–jñāna, we know Brahman to be one of the three aspects of the Absolute,5 also referred to as Bhagavān’s effulgence. Therefore, if we glorify Bhagavān’s effulgence as such, the source of that effulgence is glorified even more. From an uttama–bhakti perspective, we can think, “The brahmavādīs are so attracted by Bhagavān’s effulgence that they are prepared to spend lifetimes qualifying to blend in with that. How much more should I be prepared to invest if I aspire to enter Bhagavān’s inner abode?”6

Here someone may object, “Is it really possible for a taṭastha–jīva to become one with Brahman?” No, it is not. But although the relationship between shelter and sheltered remains, a perfected brahmavādī does not experience any difference between themselves and Brahman.7

Another objection may be, “The brahmavādī will fall down from the brahmajyoti eventually, will they not? Can their liberation really be called ‘perfection,’ then?” Sometimes, a couple verses from the Śrīmad Bhāgavatam are cited to suggest this,8 but a closer reading reveals that they are talking about those who have attained tentative liberation (jīvan–mukti) and are still waiting in their bodies for their manifest karma to expire. If they have any lack of regard for bhakti or Bhagavān at that point, their karma will not expire. Rather, their karma will increase, and they will again become materially entangled.

The Śrīmad Bhāgavatam, which defines mukti as a state where the jīva has given up the gross and subtle bodies,9 mentions five kinds of mukti, of which sāyujya–mukti (ekatva) is one.10 Śrīla Viśvanātha Cakravartī Ṭhākura comments that the jīvas free from the gross and subtle bodies are of two kinds: those who remain in their pure form and those who have become associates of the Lord. Those remaining in their pure forms are sāyujya–muktas, and the Bhāgavatam describes their attainment as the supreme bliss (for those who seek it), where all desires are completely fulfilled.11 Another verse in the text describes this joy as uninterrupted,12 speaking in the context of glorifying Bhagavān and his bhaktas since Brahman realization is only a stepping-stone for them.

If a brahmavādī maintains regard for bhakti all the way until their manifest karma expires, they attain sāyujya–mukti. Their bhakti is material,13 unlike uttama–bhakti, yet it is empowered by the svarūpa–śakti.14 The mukti they attain is called ātyantika—“final” or “ultimate”—meaning that one can never fall from that state. The Śrīmad Bhāgavatam states this when describing the progress of time as four types of annihilation: continuous, occasional, complete, and final.15

The first type of annihilation comprises the continuous destruction of material bodies: our body dies, and then we take birth in another one. In the occasional destruction, the universe is destroyed during each night of Lord Brahmā and restored when he wakes up. The complete destruction of the universe occurs at the end of Lord Brahmā’s life, which coincides with the end of one of Lord Viṣṇu’s inhalations. When Lord Viṣṇu exhales again, other universes are created along with new Lord Brahmās.

The fourth annihilation, unlike the first three, is not part of that cycle. It is the cessation of karma for brahmavādīs who have attained jīvan–mukti, the above-mentioned state of liberation on probation. With this annihilation, they are granted final release—bodiless liberation (videha–mukti)—after having been well-behaved in regard to bhakti and Bhagavān. After this final release, there is no return, Śrīla Jīva Goswāmī claims, citing the Vedānta-sūtra and the Chāndogya Upaniṣad for support.16

If an uninformed sādhaka believes that one returns from videha–mukti, they may also assume that jīvas initially fall from Brahman, as Brahman is sometimes referred to as the source of the jīvas.17 Brahman is the source in a general sense, and speaking of Brahman as the source of the jīva means that the jīva is dependent on Brahman (the words “Paramātmā” or “Bhagavān” could be used here as well) just as a sunray is dependent on the sun. This does not mean that the conditioned jīva previously had Brahman realization. All conditioned jīvas have been conditioned since a time without beginning.18 And as Śrīla Jīva Goswāmī states, Māyā cannot remain before Brahman.19 Out of fear, she keeps far, far away from even the jīvan–muktas. What, then, to speak of the distance she keeps from the videha–muktas? Where would material desire even take root in them? The Bhagavad Gītā20 says material desire has three sitting places: the senses, the mind, and the intelligence. The videha-mukta possesses neither of those.

Compassionate devotees may wonder at this point, “Is there any hope for the sāyujya–mukta to be blessed with uttama–bhakti?” Citing none other than Śrī Śaṅkarācārya, Sanātana Goswāmī says it is possible: muktā api līlayā vigrahaṁ kṛtvā bhagavantaṁ bhajanti, “For the sake of performing pastimes, even liberated souls accept a body and worship Śrī Bhagavān.”21 He gives Prahlāda Mahārāja as an example of someone who merged into the Absolute at the end of his previous life and then took the form of Prahlāda as we know him.22 While this is rare, Sanātana Goswāmī says that the possibility remains in most cases, although in some cases Bhagavān may consider someone’s sāyujya–mukti to be final by his will. Sanātana may be referring to cases where Bhagavān places someone in brahma-sāyujya because they have become so envious toward devotees that there is no cure other than sāyujya–mukti. Śrīla Jīva Goswāmī writes about this in Paramātmā-sandarbha, wherein he states that this does not happen to jīvas in whom the seed of bhakti has taken root.23 If such jīvas have developed strong envy, Śrī Kṛṣṇa may kill them in a manner similar to the one in which he kills demons, but he will give them a place in the spiritual world, as in the case of Pūtanā.24