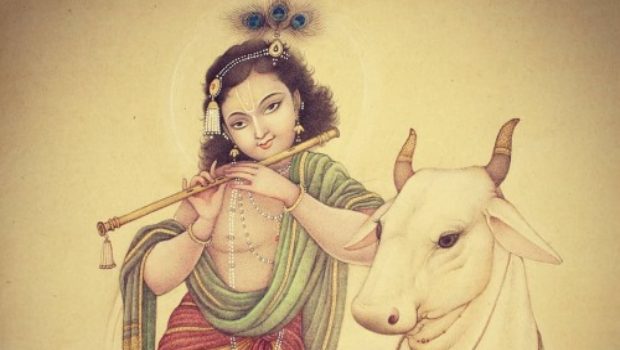 My Guru Maharaja Swami B.V. Tripurari is releasing a book entitled Sakhya Mandala: Circle of Friends, in which he explores the historical roots and underlying tattva of sakhya rasa as well as its vantage point and expression in lila. It is a very intimate and personal work for my Guru Maharaja given his affinity for preyo bhakti. As a meditation on the gift he is sharing, I wrote my senior thesis this past year on instances in the Sri Caitanya Caritamrita where devotees share internal experiences of their deity, Sri Krsna. Here I present a shortened and edited version of my senior thesis for the pleasure of the Vaishnavas.

When Krsna happens to come within my sight, my mind is carried off by the forceful blows of love; and he stole any meaning of the names passion and bliss, for they filled my heart such that I could not see his beauty. When I again can see that Krsna, then I shall adorn that moment with many valuable jewels.

Sri Caitanya Caritamrita is a voluminous hagiography composed by the Indian mendicant Krsna Das. The text centers on the life and teachings of the ecstatic saint Sri Caitanya, who spread spontaneous devotion to Krsna throughout India in the 15th and 16th centuries. Krsna Das’s composition, which was written a generation after Sri Caitanya’s passing, became a central text for the followers of Sri Caitanya in the religious tradition of Gaudiya Vaisnavism. A unique quality of this work is the extraordinary descriptions of not only Sri Caitanya but also his followers, many of whom are regarded as saints themselves with followers of their own. Sri Caitanya Caritamrita contains an abundance of narratives relating the character traits and mystical activities of these saintly individuals along with those of Sri Caitanya. These accounts explore the internal and external circumstances of a darshan, or divine revelation, and how this type of experience comes to be known by others.

Darshan means “to see.” It can describe the vision (and/or proper understanding) of a philosophy, guru, deity, or—in the highest application of the term—the beautiful form, qualities, and pastimes of Krsna. Reflecting on the esoteric nature of darshan in The Philosophy and Religion of Śrī Caitanya, O.B.L. Kapoor describes how “the transcendental character of mystic activity is indicated by its passivity. It is said that God is not discovered, but makes himself known.”1 In this sense, it is sometimes said that darshan does not mean “to see” but rather “to be seen.” The darshan experience descends with great force onto that devotee who is truly seen by Krsna. And what makes Krsna cast his side-long glance in the direction of a certain devotee? To this question, Brahma Samhita offers a beautiful poetic answer:

I worship Govinda, the primeval Lord, who is Śyāmasundara, Kṛṣṇa Himself with inconceivable innumerable attributes, whom the pure devotees see in their heart of hearts with the eye of devotion tinged with the salve of love.2

Thus, Krsna truly sees that devotee whose eye, or subjective internal vision, is fully saturated with loving devotion. So, although there is a passivity in the devotee’s disposition, it is a devotional passivity—a passivity in which intense feelings of love and longing permeate constantly from the heart. And when these waves of emotion move Krsna’s heart to such an extent, he is impelled by his own sweet will to reciprocate and manifest his enchanting form, qualities, and pastimes before his pure devotee. Union between the visaya (object) and asraya (shelter) alambanas (of love) makes a strong impression on the devotee’s heart—and on Krsna’s heart too. Simply put, nothing else matters after the devotee experiences the darshan of Krsna. Such an intensely sweet encounter bewilders the mind and sets off a myriad of emotions and thoughts, ranging from boundless ecstasy to feelings of unworthiness. What could rouse more inspiration and humility than Krsna reciprocating with one’s earnest love in separation?

Receiving the darshan of Krsna creates a conflicting internal dynamic for the recipient. Krsna is known for giving special mercy to one who has transcended all material illusion and cultivated deep selfless love for him. So, if it comes to be known that one received the divine vision of Krsna, that individual will be recognized and worshipped for their spiritual standing. One of humble nature will naturally feel inclined to hide their revelation from others to avoid such veneration—in their subjective vision, it was Krsna’s mercy that gave rise to their darshan, not their own purity or love. Also, mystical visions are not wholly communicable in language, and the untransmissible nature of words further compels one to withhold their vision from others. However, oppositional desires also manifest in the heart of a saint and put pressure on their reluctance: intense eagerness arises to glorify the sweetness of Krsna that one experienced and thereby give inspiration to others in their devotional life, which such an account will naturally foster. If one does not share their darshan, how will Krsna’s ongoing mercy come to be known? The conflict is thus twofold: How can the humble profess Krsna’s glories if they cannot be unwoven from one’s own glories? And how does a compassionate heart share a divine sweetness that is inexpressible in its entirety? Krsna Das provides keen insight into the inner-emotive waves that ensue from saints’ mystical revelations through different rhetorical devices in Sri Caitanya Caritamrita.

The glorious author of Sri Caitanya Caritamrita, Krsna Das Kaviraja, dedicates one chapter within the introductory section of the text to the ontological glorification of Nityananda, a metaphysical expansion of Sri Caitanya (and therefore Krsna) in a mood of friendship. In this section of the text, Krsna Das shares his personal darshan of Nityananda in a dream, and his own inner tension to do so is expressed through juxtaposing metacommentaries in the preface and appendix of sharing his revelation. Prefacing his story, he humbly reflects how Nityananda “causes the lowest of jivas (souls) to rise up to the highest limits.”3 Krsna Das is indirectly describing himself as a very lowly soul, and his indirectness further substantiates his humility. Not wanting to bring attention by singling himself out in any way, Krsna das indirectly places himself in a vast and unimportant group: the lowest of jivas.4 Reflecting on examples such as this in The Final Word: the Caitanya Caritāmr̥ta and the Grammar of Religious Tradition, Tony Stewart remarks, “Couched in the subtleties of Vaisnava humility, Krsna Das’s rhetoric style sparkles.”5 His humility is swelling because although he feels moved to share the story of Nityananda’s glorious mercy, he is aware that his own exceptional love and devotion to Nityananda is interwoven into the story. It is as if Krsna Das is imploring within himself, “How can I glorify Nityananda Rama’s mercy to me without glorifying myself?” However, Krsna Das knows that this is not possible; his own devotional glory is the direct evidence of Nityananda’s mercy. This internal wrestle of competing desires manifests in Krsna Das expressing extreme humility before relating his story.

Although Krsna Das is filled with self-resignation, his eagerness to glorify Nityananda overpowers him. Concluding his prefatory metacommentary, he enthusiastically writes, “It is improper to speak openly of this secret matter of the Veda, yet it has been discussed to reveal his mercy. Overcome by Joy, I write of your grace, Prabhu Nityananda. Forgive my transgression.”6 The bliss of glorifying Nityananda’s grace conquers Krsna Das’s humilty, and he joyfully surrenders to this defeat. As a scientist relishes sharing a new discovery about the nature of the world, Krsna Das is eager to reveal a distinct aspect of Nityananda’s unfathomable character, which was displayed to him so profoundly in his dream. Krsna Das wants to further extend Nityananda Rama’s merciful hand (clanging as it is with bangles around his wrist) so that other jivas may find faith and devotion in his grace. Although he knows it is improper to share such intimate details publicly according to traditional vedic standards, raganuga bhakti (spontaneous devotion) is not characterized by such formal rules. Kapoor describes how raganuga bhakti is “a life complete in spirit.  It enjoys complete freedom from the sense of ‘ought’… it is life fulfilled in love.”7 Being situated firmly on the path of raganuga bhakti, Krsna Das feels free to glorify and share the mercy of Nityananda Rama.

Krsna Das’s inner juxtaposition swells to more intense levels after sharing his darshan. He again dives deep into a mood of self-resignation, claiming, “He who hears my name, his merit is destroyed; he who takes my name does a very sinful thing.”8 The profound personal effect of sharing his story is tangible in the consequential intensity of his humilty. Reliving the experience of Nityananda’s mercy through writing, Krsna Das’s gratitude mounts to such a degree that he can only reflect on his undeserving position. However, his reverant humility will further serve to foster his passion for intimate sweetness. Contemplating this inner relationship in his Humility and Passion: a Caitanyite Vaishnava Ethics of Devotion, Graham Schweig writes:

The intimate deity is emphasized over the cosmic or almighty deity, and yet for the devotee, they are always experienced in dialectical tension with one another. Neither is excluded; rather, the one is implicitly or explicitly experienced while the other is in the background. The intimate deity inspires a passionate devotion, and the cosmic or powerful deity a devotion of humility… humility intensifies the experience of passion, and conversely, passion further intensifies the experience of humility in devotion.9

And so at the end of the appendix, Krsna Das concludes his metacommentary by stating, “I have written my own story without shame; the qualities of Nityananda cause me to write, being maddened.”10 His joyfully defeated attitude suggests that he is very aware of his own inner juxtaposition, which was expressed through metacommentary in the preface and appendix of his story. Having endured the inner turmoil of glorifying Nityananda at the expense of glorifying himself, Krsna Das’s compassionate heart is satisfied to know that Prabhu’s mercy will fall on hankering ears.