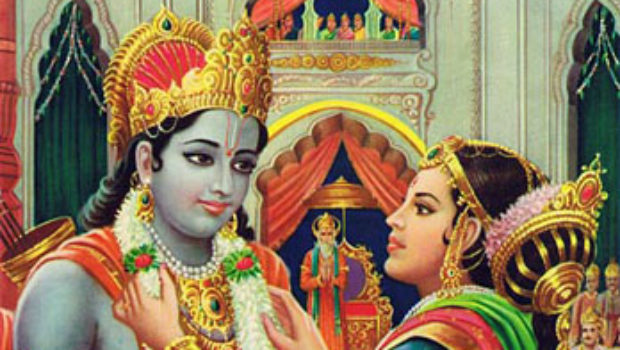 When Mahaprabhu went to South India he met one brahmana, Ramadasa Vipra, who invited him for lunch. After Mahaprabhu had been waiting for his lunch for some time, he asked when it would be served. Ramadasa Vipra replied, “It is just coming, Laksmana has gone to collect some roots, leaves, and fruits, and soon it will be prepared.” Mahaprabhu was intrigued by his absorption in Rama lila.

Some time passed and still, no lunch was made. Mahaprabhu inquired again, and Ramadasa Vipra replied from deep within his meditation in Rama lila, “How can I cook? Sita has been stolen by Ravana! I have no appetite! I have to help Rama bring Sita back! How can we go on with our lives, what to speak of cooking and eating?” Mahaprabhu was very pleased to hear how absorbed he was in Rama lila, but he assured him that everything was all right, telling him, “Sita can never be kidnapped by Ravana. It is not possible. This is only on the surface—an illusory Sita has manifest, and Ravana has stolen that Sita.” In this way, he tried to convince Ramadasa Vipra and was able to pacify him.

Later, after going further south, Mahaprabhu found scriptural evidence from the Kurma Purana that confirmed that the real Sita could not be kidnapped by Ravana. He was very pleased to find this and took the pages of that sastra to Ramadasa Vipra on his way back to Jagannatha Puri. He never tried to convert him. He simply saw the extent of his devotion and was very pleased with that.

One Response to Ramadasa Vipra