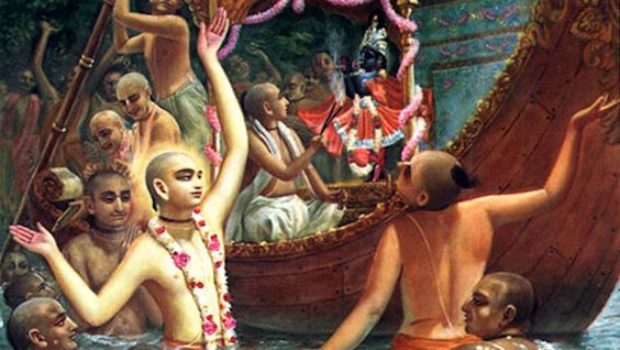 By Śrīla B.R. Śrīdhar Dev-Goswāmī Mahārāja, from Loving Search For The Lost Servant.

We are worshippers not of the fatherhood of Godhead, but of the sonhood of Godhead. We don’t worship him as the creator or as the controller, out on the circumference, but in the conception of sonhood, he is in the center. He is not on the circumference but in the center. It is not that from one side he is furnishing everything, creating everything in the background. No; he is in the center. That is the conception of Śrīmad Bhāgavatam: sonhood, and then consort-hood, a more heavenly expression, is found there. He is there in the center, and his extensions emanate from him. So in our conception of the Absolute, his father is controlling him, his mother is abusing him and punishing him, and he is also seen to fall at the feet of his beloved. What to speak of guru, even Godhead himself may appear to become bewildered about his absolute position.

And why? Love divine. Prema. So how highly precious a thing divine love must be. After liberation, beyond calculative devotion, in the highest plane of the whole creation, eternal love reigns supreme. And that divine love emanates from him just as rays of light emanate from the sun.

So, he is at the center, and his extension is on all sides. Baladeva on one hand supplies the energy of existence, maintaining everything in the background, and the ecstatic side is controlled by his potency Śrīmatī Rādhārāṇī, who can make the Absolute Independent a ball in the play of her hand.

It is inconceivable, it is incalculable, but this is the very nature of Divinity. The Lord says, “Ahaṁ bhakta-parādhīno: yes, I have freely accepted subjugation to my devotees. I have no independence of my own. The way my devotees treat me is so wonderful that it makes me subservient to them.” Divine love is so charming that it is considered to be the ultimate goal of life, and Śrī Chaitanya Mahāprabhu personally came along with Nityānanda Prabhu to broadcast that news to the world.

We may have a taste of that divine life only in that plane of nectar. That we may live in the waves of that ocean of love is the highest objective of our lives.

In that divine realm, our individual personalities can be maintained. It is not necessary that if we dive deep into the plane of consciousness, we must lose our own personality, our own individuality. It is not necessary at all. And yet, the nature of divine love is that you are still living, but you are living on his behalf, wholesale converted into His service. It is a wonderful thing: you can keep your personality for the interest of Kṛṣṇa. But you must have no selfish motive, no conception of separate interest. Merging there is not physical, mortal merging, not merging of the losing variety, but the kind of merging spoken of in Śrīmad Bhāgavatam (11.29.34):

One who is subjected to birth and death attains immortality when he gives up all material activities, dedicates his life to the execution of my order, and acts according to my directions. In this way, he becomes fit to enjoy the spiritual bliss derived from exchanging loving mellows with me.

Only through love and devotion can I be understood as I am. Thereafter, fully understanding me, you can merge into my entourage.

This ‘merging’ is explained by Kṛṣṇa: “They enter into me to become a person in my family. Among the circles of My friends, he enters: viśate tad-anantaram. He becomes as if my own. That means that without losing your personality you can be fully my own.” To enter into the Lord’s family is a living merging, not a physical or dead merging into brahma, spirit. That is the result of prema, divine love.

That ideal is above the general conception of merging into the oneness of brahma, where one loses oneself in the ocean of consciousness as if in a sound sleep. We are not interested in that. Rather, through Kṛṣṇa consciousness, we become lost swimming in the ocean of sweetness. This has been accepted by Śrī Chaitanya Mahāprabhu. 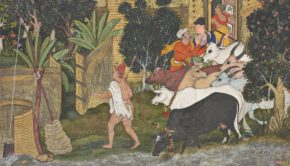 One Response to The Sonhood of God