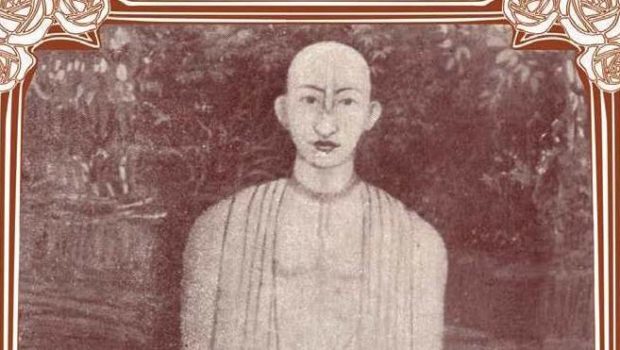 Baladeva Vidyabhusana was born in Orissa, near Puri, in a place called Chilka Lake. He was very brilliant, and in his boyhood, he learned all vyakarana (Sanskrit grammar) as well as the Vedas, Upanisads, and all other scriptures. He wanted especially to read and study Vedanta. He read Sri Sankaracarya’s explanation of Vedanta, but he was not satisfied and wanted to study more. Therefore, he went to South India, to a place called Udupi, where he studied all the commentaries on Vedanta, like the Sri-bhasya of Sri Ramanuja, the Parijata-Saurabha-bhasya of Sri Nimbaditya, more of the Sariraka-bhasya of Sri Sankaracarya, the Sarvajna-Sukti-bhasya of Sri Visnusvami, the Brhad-bhasya and Anubhasya of Sri Madhvacarya, and the Bhaskara-bhasya of Sri Bhaskara Acarya. He became very learned, and after that, he returned to his homeland with a desire to free the world of its misunderstandings of philosophical tattva.

He went to Jagannatha Puri, and he thought, “Previously, Sarvabhauma Bhattacarya and many others like him have been here, so there must be so many learned persons in their line. I will conquer and defeat them.” At that time there was a Gaudiya-Vaisnava present, named Radha-Damodara Prabhu, who was in the line of, and just after, Syamananda Prabhu, Rasikananda Prabhu, and Nayananda Prabhu. Radha-Damodara Prabhu was a very good scholar. He was very learned, but he kept all his knowledge hidden. He was a very simple person, always chanting and remembering, following in the line of Sri Caitanya Mahaprabhu and Srila Rupa Gosvami. One day Baladeva Vidyabhusana came to defeat him, but when he heard all his siddhanta (conclusive truths) he thought, “I am very insignificant and I do not know anything in front of him. I am like a baby, a small baby.” He at once surrendered to the lotus feet of Radha-Damodara and took initiation from him.

After that, he went to Vrndavana and took shelter of his siksa-guru, Srila Visvanatha Cakravarti Thakura, and he totally surrendered to him. There he read all of Srila Jiva Gosvami’s Six Sandarbhas: Tattva-sandarbha, Paramatma-sandharbha, Bhagavat-sandarbha, Krsna-sandarbha, Bhakti-sandarbha, and Prtti-sandarbha.

Srila Visvanatha Cakravarti Thakura had taken ksetra-sannyasa. Ksetra-sannyasa means that one lives either in Vraja-dhama, Navadvipa-dhama, or Jagannatha Puri-dhama and takes a vow: “I will not leave this place.” Srila Visvanatha Cakravarti Thakura had taken ksetra-sannyasa in Vrndavana-dhama. He had decided, “I will never go out of Vrndavana.” Gradually, he reached the old age of one hundred years, and at that time there was some quarrel.

Some of the members of the Ramanuja Sampradaya, which propounds vaidhi-bhakti and varnasrama dharma, challenged, “How is it that Srimati Radhika, although not married to Krsna, always sits with Krsna? It is illegal.” That was the first question. Second: “There is no mention of the name Radhika in Srimad-Bhagavatam or in any other sastra.” And third: “The Gaudiya Vaisnavas are not in any Vaisnava sampradaya. There are only four sampradayas: Sri-Laksmi-sampradaya, Brahma-sampradaya, Rudra-sampradaya, and Sanaka-sampradaya. In Kali-yuga there are four prominent acaryas: Ramanuja in the Sri-sampradaya, Madhvacarya in the Brahma-sampradaya, Visnusvami in the Rudra-sampradaya and Nimbaditya in the Sanaka-sampradaya. From where did these Gaudiya Vaisnavas recently come? We don’t accept them. They have no commentary on Vedanta-sutra, so we cannot accept that they know siddhanta. We cannot accept their philosophical conclusions.”

The King of Jaipur requested Srila Visvanatha Cakravarti Thakura to come, but he denied their request. He ordered his disciple Baladeva Vidyabhusana Prabhu to go in his stead. Baladeva Vidyabhusana Prabhu went there, together with another prominent disciple of Srila Visvanatha Cakravarti Thakura, and defeated all. He quoted many Puranas, Vedas, Upanisads, and the Srimad-Bhagavatam, proving that Srimati Radhika and Lord Sri Krsna are always together. Radhika is Krsna’s potency or power–they cannot be separated.

Srila Baladeva Vidyabhusana quoted a story from Srila Jayadeva Gosvami’s Gita-govinda that showed how Radhika was married to Krsna. He also quoted the history from Srimad Bhagavatam wherein Lord Brahma stole all the cowherd boys and calves, and Krsna Himself became exact duplicates of all the boys. According to the Bhagavatam, that year Gargacarya announced that all the cowherd men should give in their daughters in marriage because it was a very auspicious year. In that year, therefore, all the daughters were married to all the sons of the cowherd men. Actually, though, because the young cowherd boys were Krsna Himself, all the girls were married to Krsna.

Certainly this particular gopi has perfectly worshiped the all-powerful Personality of Godhead, Govinda, since he was so pleased with her that he abandoned the rest of us and brought her to a secluded place.

There are so many verses substantiating the truth of Sri Sri Radha and Krsna. Srila Baladeva Vidyabhusana Prabhu quoted them all, and he proved that Radhika is Sri Krsna’s own power–for them, there is no need to marry. The followers of the Ramanuja-sampradaya accepted these arguments. They were bound to accept; they were defeated.

The opposing party then said, “You have no bona fide Vaisnava sampradaya.” Baladeva Vidyabhusana then proved the Gaudiya Vaisnavas are in the line of Sri Madhvacarya. Sri Laksmipati Tirtha, who gave diksa to Sri Nityananda Prabhu, was a disciple of Sri Madhvacarya. Sri Madhavendra Puripada, the grand spiritual master of Sri Caitanya Mahaprabhu, was also a disciple of this Laksmipati Tirtha.

The followers of the Ramanuja sampradaya challenged, “Laksmipati Tirtha was ‘Tirtha’ and Madhavendra Puri was ‘Puri.’ How did this difference come?

In the same way, although Srila Madhavendra Puri received sannyasa from someone else, he was initiated into the gopal-mantra by Sri Laksmipati Tirtha. There was a householder devotee at that time, who took sannyasa from someone in the Sankara-sampradaya, just as Sri Caitanya Mahaprabhu did. Like Mahaprabhu, he was Vaisnava, not a mayavadi. That Vaisnava was named Visnu Puri, and he had been initiated in the Madhva-sampradaya. Madhavendra Puri took sannyasa from that Puri – from Visnu Puri. In this way, Gaudiya Vaisnavas are part of the Madhva-sampradaya.

Nowadays, there is similar friction in Vrndavana and Navadvipa. One party is saying, “We, Gaudiya Vaisnavas, are not under any Vaisnava sampradaya. We are fully independent. Why should Caitanya Mahaprabhu take shelter of any other sampradaya? He is Krsna Himself.”

Nowadays, that party says that Gaudiya Vaisnavas are a separate and fully independent sampradaya. But Srila Bhaktivinoda Thakura, Srila Jiva Gosvami, and before that Srila Gopala-bhatta Gosvami and Sri Kavi-karnapura, have accepted the Madhva-sampradaya. So we must also accept the Madhva-sampradaya, as Sri Baladeva Vidyabhusana has written in his books.

This idea is totally wrong. If Baladeva Vidyabhusana was not in our Gaudiya Vaisnava line, how could he have explained all the sandarbhas of Srila Jiva Gosvami? He accepted Sri Caitanya Mahaprabhu as non-different from Sri Krsna. All his books are in our line – in the line of Srila Visvanatha Cakravarti Thakura. He also explained Srila Rupa Gosvami’s Laghu-bhagavatamrta, as well all the books of Srila Visvanatha Cakravarti Thakura and the other books of Srila Rupa Gosvami. He was a Rupanuga Vaisnava.

If Srila Baladeva Vidyabhusana had not been present at that time, our Gaudiya Vaisnava identity would have disappeared from this world. He established all the principles and philosophies established by Caitanya Mahaprabhu. He is a true Gaudiya Vaisnava.

For about one hundred years, Smartas have been raising this question, but Srila Bhaktivinoda Thakura, Srila Prabhupada Bhaktisiddanta Sarasvati Thakura, and all other great acaryas have defeated all their arguments. Our Guru Maharaja has very boldly written a book about this. I want to publish it, with so many notes and explanations. Very soon I will publish it. (This book was later published under the name Prabandha-Panchakam.)