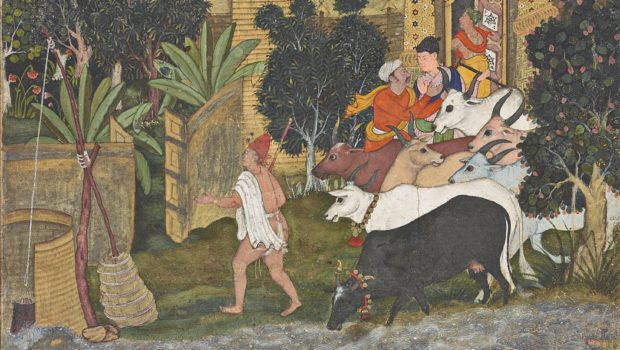 Hera Pancami and the Bhava of Dwarka

The meaning of Hera Pancami is as follows. On the fifth day of the Chariot Festival, Laksmi Devi becomes very worried and thinks, “Where has my husband gone? He told me, ‘I am going for a change of environment for some days, and I will return very soon.’ It has been five days now, and still, he has not come back.” Unable to tolerate this, she becomes very angry and gives orders to all her associates as though they had to fight with the enemy: “Take up your weapons!” Then she becomes the commander-in-chief of her “army,” and goes to “attack” her husband.

During the Ratha-yatra Festival, Sri Caitanya Mahaprabhu wanted to taste the mellows of Hera Pancami. In the early morning, he went to Sundaracala along with his associates and took darsana of Jagannatha, Baladeva, and Subhadra in the Gundica Mandira. Whenever he went to Jagannatha’s temple, he used to see Jagannatha as Krishna, Vrajendra-nandana Syamasundara, with a peacock feather in his crown, a flute in his hands, very beautiful lotus eyes, and all the other attributes of Krishna when he is with the gopis in Vrndavana. Mahaprabhu never saw Baladeva, Subhadra, or Sudarsana chakra, because Krishna never carries Sudarsana in Vrndavana. Mahaprabhu never prayed to Baladeva or to Subhadra in the temple. He saw them both during the Chariot Festival, but otherwise, he saw only Jagannatha. This was all very wonderful.

Jagannatha had gone to Sundaracala (which represents Vrndavana) from his temple in Nilacala (which represents Dvaraka) and, on the evening of the fifth day, Laksmi arrived at Sundaracala with all her associates.1 She was decorated with many precious ornaments made of gold and jewels, and she wore very beautiful and opulent garments. The previous day, Kasi Misra, who was the guru of King Prataparudra, had advised the King, “Bring Laksmi Devi very valuable gold and jeweled ornaments and decorate her with them. Make such a beautiful festival for her that everyone will be struck with wonder. They should think they have never seen anything like this before. Caitanya Mahaprabhu wants to taste all the mellows of this festival.” Accordingly, Laksmi was decorated with gold and jeweled ornaments, opulent garments, and other paraphernalia.

At the Simhadvara (lion gate) in front of the Jagannatha Temple, Kasi Misra gave very beautiful seats to Mahaprabhu and his associates such as Srivasa Pandita, Sri Svarupa Damodara, and Sri Raya Ramananda. Soon after they were seated, Laksmi arrived with all her associates and opulence, as if she was coming to attack Jagannatha. First she “attacked” Jagannatha’s associates, who were actually Mahaprabhu’s associates, like Sikhi Mahiti, Vakresvara Pandita, and so on, and then she tied them up and bound them like prisoners. Her associates then punished them all by striking them with “whips” made of soft cloth, and she accused them, “Oh, you should admit your guilt and pay something. You have taken my husband. Where are you keeping Him? Bring Him here right now.”

Sri Caitanya Mahaprabhu was extremely happy to see this pastime and, tasting its mellows, he said, “I have heard that when Satyabhama used to exhibit mana, She would remove all her golden ornaments. Then she would enter a dark, private room, put on dirty garments, scratch the ground with her nails, and weep continually. But here I see another kind of mana in Laksmi. She is like a commander-in-chief going to attack with many soldiers. I have never seen anything like this, nor have I ever even heard of such a thing.”

Svarupa Damodara then explained that there are many kinds of mana, and that this mana of Dvaraka is very different from that of the gopis in Vrndavana. Mahaprabhu told Svarupa Damodara:

Although Lord Jagannatha enjoys his pastimes in Dvaraka-dhama and naturally manifests sublime liberality there, still, once a year he becomes unlimitedly eager to see Vrndavana.

Why did Krishna leave Vrndavana? Ultimately he did so to please and pacify the gopis. It is said that he leaves Vrndavana and comes to Mathura and Dvaraka because he cannot forget the devotees there – or anywhere else. He must support and nourish them. The next question would then be: after leaving why did he not return, at least for a visit. One answer is that there is no fort in Vrndavana. If Krishna had returned to Vrndavana, and Jarasandha had come to know that he was really the son of Nanda and Yasoda rather than that of Vasudeva and Devaki, Jarasandha would have attacked Vrndavana and it would have been ruined. Nanda Baba was a cowherd, a gopa, not a warrior, and there were no soldiers in Vrndavana. Jarasandha would therefore have destroyed all of Vrndavana and then imprisoned Yasoda and Nanda Baba, as Kamsa had imprisoned Vasudeva and Devaki.

This is a reason, but it is external. Someone may say, “At least Krishna should go to Vrndavana from time to time, and then he should return quickly.” But Krishna has so many enemies, and all of them would come to know that he has many friends in Vrndavana. They would think, “They should be attacked, and they should be finished.” This is another reason he did not return there, but it is also external.

Someone may say, “Krishna was able to take all his associates of Mathurapuri to Dvaraka in one night, in just a minute. He had abundant grand palaces built there, not only for each of his queens but also for all his associates such as Akrura and Uddhava, as well as for Vasudeva and Devaki. There were so many thousands and millions of Mathuravasis. They went to sleep in Mathura, and in the morning they saw that they were in Dvaraka. This was very wonderful, and it shows that Krishna can do anything he likes. Similarly, in one night he can take to Dvaraka all his associates from Vrndavana, such as Radhika, Lalita, Visakha, and all the other sakhis, as well as all cowherd boys like Sridama, Stoka-krsna, Lavanga, and Arjuna. He can take his mother and father, Yasoda-maiya and Nanda Baba, and all the other Vrajavasis as well. Is there any harm in that? If all the Mathuravasis can be there, the Vrajavasis can be there as well.”