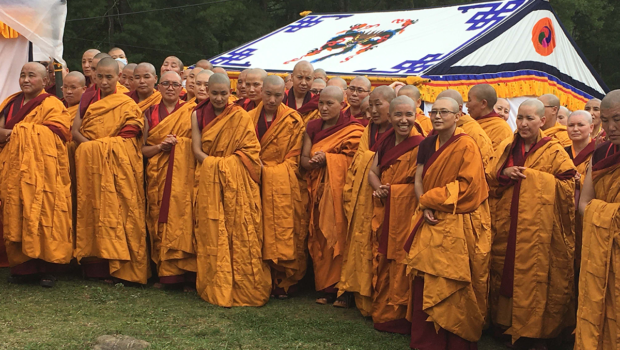 The first ceremony to fully ordain women within Tibetan Buddhism in modern times concluded Thursday, June 23, 2022, in Bhutan. At the request of the King of Bhutan, His Holiness the Je Khenpo, the spiritual head of Bhutan’s largest Buddhist school, the Drugpa Kagyu, presided over a ceremony to grant bhikshuni vows to 144 women.

This initiative marks a major step toward addressing the inequality between men and women in Tibetan Buddhist monasticism. Until Thursday, women were only granted novice ordination, while men could receive full ordination, guaranteeing that women could never assume full roles within the monastic order.

This historic event establishes a bhikshuni sangha — an order of fully ordained women — within Tibetan Buddhism for the first time. Until now, senior leaders within Tibetan Buddhism such as His Holiness the Dalai Lama and the Karmapa have spoken publicly in favor of granting full ordination to women, but have stopped short of organizing a bhikshuni ordination for women in their communities.

In a lengthy statement describing the decision to offer full ordination, Je Khenpo described the event as aimed at “serving sentient beings through the buddhadharma, engendering religious freedom and helping human rights.” He added, ”…whenever I look at images of Buddha Shakyamuni these days, every one of them appears to be radiantly smiling at me, which I think is an early indication that what I am doing is not wrong. I have a strong conviction that they would announce, ‘this is excellent!’ and never say ‘this is not right.’”

Bhutanese Buddhists practice Tibetan Buddhism, but the ecclesiastical hierarchy of their monastic communities is distinct from that of the Tibetans in exile for whom the Dalai Lama is a supreme authority on religious and political matters. The move has garnered a wide base of support at the highest levels of Bhutanese lay society and its monastic hierarchy.

Such a public expression of support from the highest levels of Bhutanese lay society as well as the highest level of monastic support bodes well for this bhikshuni sangha to receive the social support that will permit them to flourish. Although the Buddha himself granted full ordination to women and an order of fully ordained women flourished for many centuries in India, that opportunity has not been made available to women within Tibetan Buddhism in modern times.

The ordination was held at a specially prepared site below Taktsang, one of Bhutan’s famous sacred pilgrimage spots. Witnesses report seeing rainbows encircling the sun during the ceremony, which began on the summer solstice.

Utmost care is being taken to conduct the ritual meticulously. According to the monastic code, women must be ordained in groups of three. Given the large number of candidates to receive full ordination, three days were required to complete the ritual requirements for all 144 new bhikshunis. The nuns had received preparatory teachings from Je Khenpo prior to the ordination, and plans are already underway to train the nuns in their new role as holders of bhikshuni vows and to uphold their new role as fully ordained nuns.

Most candidates were from nunneries across Bhutan, with some women joining from nunneries in neighboring countries and one English nun residing in Bhutan. Jetsunma Tenzin Palmo, a long-term advocate of full ordination for women, was also present in Bhutan for the ordination. Jetsunma is a founding member of the Committee for Bhikshuni Ordination, former president of Sakyadhita and founder of the Dongyu Gatsal Ling (DGL) nunnery, also in the Drukpa Kagyu school. Nuns from DGL are among those receiving their bhikshuni vows at this ceremony.

Speaking of the 4th King of Bhutan, Jetsunma said, “His Majesty was very outspoken on the importance of raising the status of nuns to be equal to the monks.”

This article was originally published by Lion’s Roar and is partially reproduced here without the permission of the author, who is not affiliated with this website or its views.