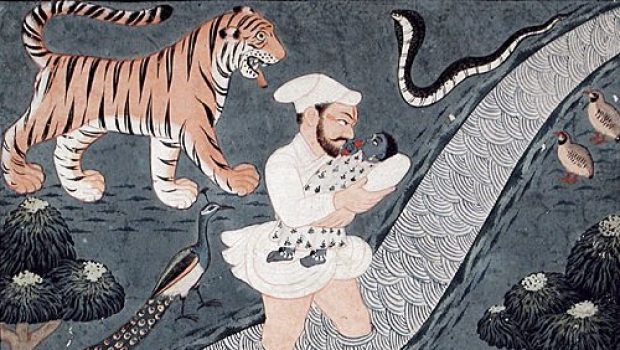 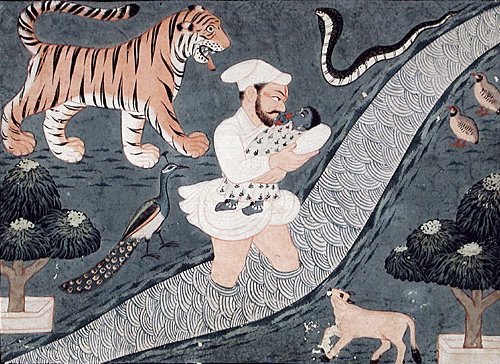 Devotee: Could you describe the details of Krishna’s birth?

Srila Sridhara Maharaja: On the whole, it is something like an imitation. It is nothing like the things we conceive of with our material senses. Krishna, a spiritual body, came and showed himself being born physically. It was an imitation, a show, like a drama or a play.

Devotee: Did Krishna appear as a child with four arms or in his mature Vishnu form with a crown and ornaments?

Maharaja: When he came out, Vasudeva and Devaki’s eyes were attracted, and they saw him with four arms and many ornaments. By his will, the iron gate to their cell opened, and the Yamuna during the rainy season became shallow. A jackal showed Vasudeva the path, and he walked through the water of the Yamuna. When he came back, the gate of the cell closed as it was previously. From the material standpoint, all these supernatural events are inconceivable and impossible. They took place only by the Lord’s will. The Lord did not come here by any particular material process, but he did imitate material processes as far as possible.

Devotee: So, Krishna was born as a four-armed, mature form of Vishnu, not a four-armed baby form?

Maharaja: When Vasudeva was beside Devaki at the time of the birth, he saw the Lord in a four-handed, full-grown form as Vishnu decorated with ornaments and began to praise him. That Vishnu form then advised Vasudeva, “Do this, this, this, and this”. Then, the Lord became a prakrta sisu, an ordinary baby. When Vasudeva first saw the Lord, he saw a four-armed form of Vishnu. That Vishnu form gave Vasudeva some advice and then assumed a form like that of an ordinary child. Vasudeva carried out the Lord’s orders, and took him, the child, to Nanda Maharaja’s home in Gokula.

Maharaja: Yes. At the same time that this four-armed Vishnu form appeared before Vasudeva, Yasoda gave birth to a male baby and a female baby. Both of these babies were beside Yasoda when Vasudeva arrived, but Vasudeva could not detect that. According to the advice he had received from the Lord, Vasudeva placed the baby that was in His arms beside Yasoda and as soon as he did so, Yasoda’s male baby absorbed Vasudeva’s baby. Vasudeva only saw Yasoda’s female baby, and he took her and put her beside Devaki. Then their cell closed as it was previously. At that time, intimation went to the watchmen, they become conscious, and then they heard the newborn baby crying. At once, they informed Kamsa, who came and found that the baby was a girl. He wondered, “Why is this so? A male child must be born to kill me, but a girl has been born. Do the gods also speak lies? What is this?” He asked Vasudeva, “Why is the child a girl? Give me an explanation.” Vasudeva replied, “You can see the child with your own eyes.” Kamsa wondered what he should do, and then he took the girl by the legs with his hand as he did with Devaki’s other children previously and thrust the baby onto the stone. As he did so, however, the girl slipped from his hand, flew into the sky, assumed the eight-armed form of Katyayani, and said, “He who will kill you is growing up in Gokula.” Then, she disappeared. Kamsa wondered what he should do, and then he engaged many spies to find all of the newborn babies in Vrindavana. He first sent Putana to kill Krishna. She did her service, but the effect came in the opposite way. Agha, Baka, and all the demons who Kamsa secretly engaged in trying to kill Krishna ended up failing in this way.