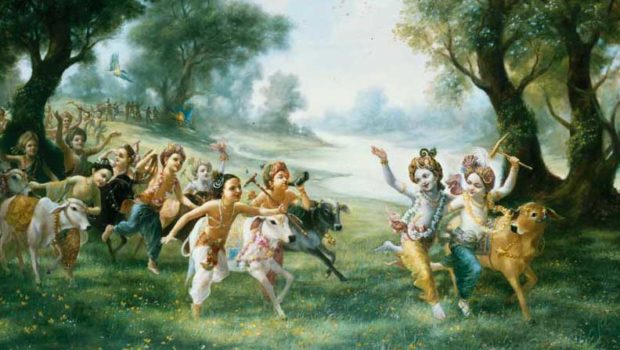 Devotional service in practice is of two types: vaidhi-bhakti (devotion based on regulative principles) and raganuga-bhakti (devotion that follows in the wake of spontaneous love). These have also been explained in the Chaitanya Caritamrta:

One who has no spontaneous attachment for the God worships him because it is ordained in the scriptures. All scriptures call such devotional service vaidhi-bhakti.1

The word raga means a natural desire for the supreme soul, a natural attachment or affection. If such a natural affection has not arisen in one’s heart, but one has developed faith in the scriptural injunctions after hearing from the saintly persons, they may perform devotional service beginning with accepting a guru. Such devotional service is called vaidhi-bhakti. There are sixty-four different activities and prohibitions which make up this type of regulated devotion. The three main regulations are taking shelter of a spiritual master, being initiated by him, and serving him. Among the other sixty-one activities, five are considered to be the most important: associating with devotees, singing the holy names, hearing the Bhagavatam, residing in Mathura (i.e., the holy dhama), and worshiping the deity with faith. Only a small amount of effort in these activities will result in the practitioner developing love for Krishna. The great authorities or mahajanas say that whether you practice only one of these five activities or all of them, unless you practice with constancy, or nistha, you will not be washed by the waves of prema. Nistha has been defined by Jiva Goswami as aviksepena satatyam, or steadfastness without distraction. The idea is that one should be fixed in a particular practice with unshakable faith.

Whether a person executes only one or many of the processes of devotional service, the waves of love of Godhead will arise if he or she practices with fixed determination or nistha.2

Elsewhere, Mahaprabhu says that the nine types of devotion named by Prahlada are the best amongst the sixty-four devotional practices. Of these nine, the first three (hearing, chanting and remembering) are considered superior. Of these three, kirtana is the best. Kirtana itself is subdivided into several categories: glorification of Krishna’s names, his form, his attributes, and his activities. Of these, pride of place is given to the chanting of his names. Anyone who takes up the chanting of the holy names with constancy is sure to obtain the mercy of the name and will quickly relish the taste of love of God.

The great authorities say that the practice of devotion purely on the strength of the scriptural injunctions leads to the majestic feature of Godhead in the abode of Vaikuntha, not to that aspect which resides in Vraja. To attain Vraja, one must take up the practice of raganuga-bhakti. This is stated in the Chaitanya Caritamrta:

Everyone throughout the world worships me according to scriptural injunctions; but by this process of vaidhi-bhakti one cannot attain the loving moods of Vraja3.

The preceding verses certainly tell us that only worship on the raga path can result in obtaining the service of Krishna in Vraja. However, what we must try to understand here is that if one thinks on that basis that the various regulative principles of the vidhi-marga can be dispensed with before acquiring a readiness for the manifestation of raganuga-bhakti, such a person will become a religious hypocrite—a pretender and a prakrta-sahajiya. For this reason, Bhaktivinoda Thakura has written in his song “Krishna-nama Dhare Kata Bal?”:

“To the person fixed in the regulative principles, the holy name gives the jewel of independence, placing him on the path of spontaneous devotion. That person, overcome by spontaneous attachment to the Lord, takes shelter of the parakiya mood and goes on to become absorbed in love for Krishna.”

One who aims for the ultimate goal of pure love for Krishna should start by taking shelter of a spiritual master according to the scriptural injunctions and following the vidhi-marga by continuously chanting the holy names of God. Such a person will thus very quickly obtain the qualifications necessary for the manifestation of spontaneous affection. As the undesirable elements of one’s character (anarthas) are destroyed, spontaneous affection automatically awakens. On the other hand, if one does not rid themselves of these undesirable elements, the discussion of subjects for which they are not qualified will in all likelihood have disastrous consequences.

This article originally appeared in the text of the book, The Art of Sadhana.

6 Responses to Regulated and Spontaneous Devotion