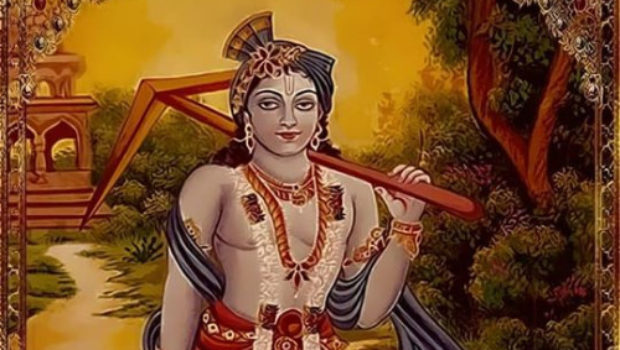 But for the most part Baladeva does not carry his plow in Vraja, but rather a buffalo horn. Every morning he blows this horn signaling the time for the young cowherds to assemble and awaken Kanai Krishna. Zillions of cowherds stampede to the courtyard of Nanda Baba at the sound of Rama’s horn. While Krishna sends his devotees into a trance with the sound of his flute, Rama awakens those in vatsalya, sakhya, and dasya rasas to their nitya seva. Always in the forefront of seva, he is the root of the serving ego in all souls and the seva that underlies the entire lila, bhakta abhiman mula balarama. With his buffalo horn, he leads the world of divine service, and with his plow, he prepares the field of our heart where the seed of that seva is first planted.