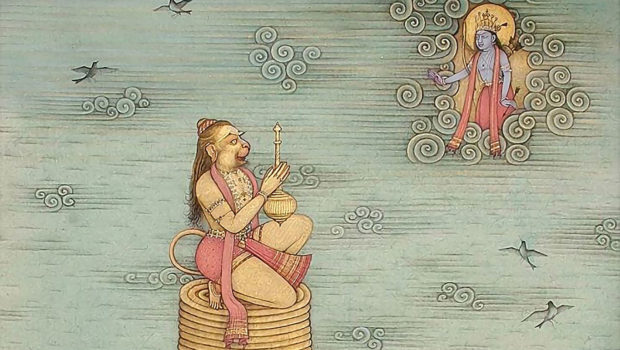 The Simultaneous Inherency and Bestowal of Bhakti—Part 8: A Servant of God (Śeṣatva)

As I discussed in the last article, some devotees argue that the soul’s attribute of dāsa-bhūto harer eva (the soul is a servant of Bhagavān Hari only and never of anyone else) in Padma Purāṇa 6.226.37 simply means that the soul is not independent and, like everything including matter, ultimately conforms to the will of the Lord. Such devotees understand Śrī Jāmātṛ Muni’s parallel term, śeṣatva, in a similar light. Examining the origin of the term śeṣatva, however, shows the inadequacy of this interpretation. The śeṣa-śeṣi (servant/master) relationship is a key concept in Śrī Vaiṣṇavism. Since the term is not common in Gauḍīya Vaiṣṇavism, it is easy for those unfamiliar with its origin to fail to understand its significance. The concept of śeṣa-śeṣi is explained on the Ramanuja.org website:

The essence of our Śrī Visiśtādvaita Sampradāya lies in its emphasis on the relationship of śeṣa and śeṣi, subsisting between the individual soul and the Paramātmā respectively. Defining śeṣatva, Śrī Bhāṣyakarā [Śrī Rāmānuja] says, paragata atisaya ādhāna icchhayā upāḍeyatvaṁeva yasya svarūpam sa śeṣaḥparaḥśeṣi [A servant is one who always wants to add glory to his master. So let us try to add glory to the Lord.]. Thus, broadly, one who exists solely for the purposes of being of some use to another, is a śeṣa, and the counterpart, for whose sole benefit he exists, is the śeṣi. The very reason for our existence is to be of service or kainkaryā to the Lord and to him only. However, full-blown Bhagavat śeṣatva manifests itself in service not only to the Paramātmā, but also to his devotees who are near and dear to him, viz., Bhāgavatās.1

As we see, śeṣatva does not refer to a general state of being subservient to God in the sense that not even a blade of grass moves without God’s sanction. Such a general truth could hardly be considered the “essence of our Śrī Visiśtādvaita Sampradāya.” Although those of us who have little knowledge of other major Vaiṣṇava traditions might not realize the significance of the term śeṣatva, Śrī Jīva Gosvāmī—and the learned contemporaries whom he was writing for—would know exactly what śeṣatva means. Thus, if Jīva Gosvāmī thought that Jāmātṛ Muni’s definition of this attribute of the soul was incorrect, he would have made it clear.

It is true, however, that in Paramātma Sandarbha 37 and his commentary, Jīva Gosvāmī chose to devote most of his discussion of the term śeṣatva to defeat Māyāvāda philosophy by stressing that the soul is eternally subordinate to Bhagavān, a major theme of the Paramātma Sandarbha. This focus on defeating Māyāvāda philosophy in this anuccheda is understandable since it is the attribute of śeṣatva that most lends to highlighting the eternal difference between Bhagavān and the individual soul. In the main text, Jīva Gosvāmī also does not spend much time discussing śeṣatva in the liberated state, at which time śeṣatva is fully manifest. Furthermore, one of the two English translations of Paramātma Sandarbha does not include Jīva Gosvāmī’s auto-commentary, entitled Sarva-saṁvādhinī, which does discuss śeṣatva in the liberated state.2 Therefore, it is understandable that some devotees do not understand the whole import of the soul’s characteristic of śeṣatva.

Here are some of the important scriptural references in the Sarva-saṁvādhinī: raso vai saḥ, rasaṁ hy evāyaṁ labdhvānandī bhavati, “The Lord is rasa. Attaining this rasa the jīva attains bliss (Taittirīya Upaniṣad 2.6.2).”3 “The jīva is described in his liberated state in sa tatra paryet jakṣat krīḍan ramamāṇaḥ: the jīva moves about there, eats, plays and enjoys (Chāndogya Upaniṣad 8.12.3).”4 “The liberated soul rises from the body, reaches the Supreme Lord, and becomes endowed with his own form (Chāndogya Upaniṣad 8.12.3). Svarūpa āvirbhūta (his svarūpa manifests through sādhana) in the sūtra refers to the jīva.”5 Baladeva Vidyābhūṣaṇa has an extensive commentary on this passage from Chāndogya Upaniṣad in his Govinda-bhāṣya commentary. In part 17 of this series, I will discuss this important section.

Jīva Gosvāmī also quotes Viṣṇu Purāṇa 6.7.93: “The jīva attains a state with the nature of Brahman. In that sense, the jīva attains non-difference with Paramātmā by bhakti. Different from the Lord, the jīva is covered by ignorance.”6 What does it mean to attain oneness with Brahman by bhakti? Of course, in the Gauḍīya understanding, there is not absolute oneness with God. Rather, there is simultaneous oneness and difference from God. Thus, oneness here means to realize that we are particles of sac-cid-ānanda with inherent śakti that allows us to serve God. The svarūpa-śakti is the energy that allows simultaneous oneness and difference: although God and his devotees are one, by the svarūpa-śakti this oneness simultaneously expresses itself in difference that facilitates līlā. In contrast, when the jīva identifies with the māyā-śakti, there is false difference based on ignorance.

Jīva Gosvāmī also says in Paramātma Sandarbha 45 that three verses from Śrīmad Bhāgavatam show the quality of śeṣatva as described by Jāmātṛ Muni:

When the mind is free of the contamination of lust and greed arising from the false identity of I and mine, and becomes pure, without [happiness and distress], and peaceful, the jīva sees himself different from ignorance, full of knowledge, devoid of coverings, subtle (small), undivided, and unattached, and as well sees ignorance devoid of power to affect him, by a mind endowed with jñāna and vairāgya, and principally with bhakti.7

These verses unequivocally show that śeṣatva includes bhakti.8 Of course, some devotees will insist that bhakti is not part of the svarūpa characteristic itself. They will argue that bhakti is a gift and, as such, it is separate from the svarūpa characteristic. By understanding the meaning of śeṣatva in context, however, the absurdity of this claim is apparent—after all, how can bhakti be separate from being a servant of God?

Having examined the statement dāsa-bhūto harer eva of Padma Purāṇa 6.226.37 (the soul is a servant of Bhagavān Hari only and never of anyone else) and Jāmātṛ Muni’s parallel term śeṣatva, let us return to the subject of how some of the soul’s characteristics are not fully manifest when the soul is covered by māyā. Although I touched on this subject in part 5, I will consider the matter in more depth.