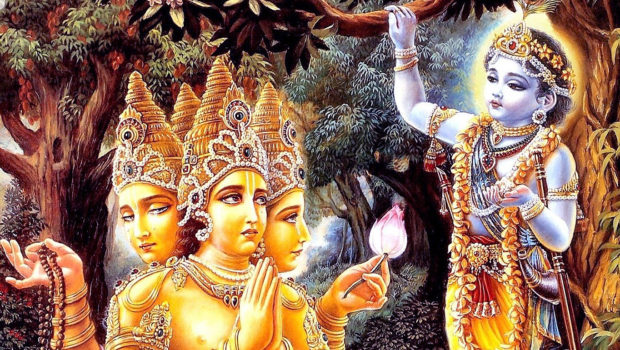 The Simultaneous Inherency and Bestowal of Bhakti—Part 7: The Soul is a Servant of Bhagavān Hari

As I mentioned in part 5 of this series, Jāmātṛ Muni bases eighteen of the jīva’s twenty-one qualities on the Padma Purāṇa, Uttara-khaṇḍa 226.34–37. The statement dāsa-bhūto harer eva of Padma Purāṇa 6.226.37 means that the soul is a servant of Bhagavān Hari only and never of anyone else. Jāmātṛ Muni’s parallel term is śeṣatva. The proper understanding of dāsa-bhūto harer eva and śeṣatva are essential to grasping the true nature of the jīva because Jāmātṛ Muni, Kṛṣṇadāsa Kavirāja Gosvāmī, and Baladeva Vidyābhūṣaṇa all emphasize that service to Bhagavān is the jīva’s central attribute. As we saw in part 4 of this series, other Vaiṣṇava ācāryas hold service to the Lord to be central as well.

Nevertheless, some argue that they simply mean that the soul is not independent and, like everything, including matter, ultimately conforms to the will of the Lord. Such devotees argue that the word dāsa merely means subordinate or dependent; it does not literally mean a devotee. This reading of Padma Purāṇa 6.226.37 is problematic on many levels. First, the passage has already just stated that the jīva is “always dependent upon” (paravān sadā) the Lord. Thus, if dāsa-bhūto harer eva means exactly the same thing as the attribute previously mentioned, it introduces the fault of redundancy. Clearly, it must mean something other or more than simple dependence upon the Lord.

We must remember that dāsa-bhūto harer eva is one of the soul’s intrinsic characteristics, which are not all fully manifest when the jīva is covered by māyā.1 The attribute of dāsa-bhūtaḥ only fully manifests when one has realized one’s svarūpa fully, that is, when one has completely manifested the twenty-one essential attributes of the soul in full. Thus, although the attribute of dāsa-bhūtaḥ may be unmanifest, it is still an essential defining attribute of the jīva. That is to say that the jīva is a devotee constitutionally. That is why when the jīva realizes his essential nature, he experiences complete fulfillment (kṛtārtha), meaning there is nothing further for him to wish for or to attain.

That the state of perfection is the full manifestation of dāsa-bhūtaḥ is clear from Vedānta-sūtra 4.4.1, sampadyāvirbhāvaḥ svena-śabdāt, which affirms that the soul’s state of perfection is the manifesting of his own true nature. This reading is accepted by all Vedāntins, including Rāmānujācārya, Madhvācārya, and Baladeva Vidyabhūṣana Prabhu. Otherwise, it would imply that being a bhakta is extrinsic or superimposed on the jīva in the state of perfection. If Jīva Gosvāmī had intended to overturn this central paradigm of Vedānta, he would surely have made it very clear. Rather, he states in Bhakti Sandarbha 178 that bhakti is natural for the jīva (svabhāvata, the innate disposition or own true nature).

Padma Purāṇa 6.226.37 begins as follows: ma-kāreṇocyate jīvaḥ, “The letter m [in aum] signifies the jīva.” In other words, these attributes of the jīva are being explained in the context of an explanation of the meaning of Praṇava (aum) within the Tirumantra (aum namo nārāyaṇāya). The Śrī Vaiṣṇavas are the authorities on this subject, as this is after all one of the sacred mantras of their lineage and, as Jīva Gosvāmī says in Bhakti-sandarbha 178, aum is their mahā-vākya. Their ācāryas, including Jāmātṛ Muni, have written extensively on the meaning of the Tirumantra, including aum, in their rahasya-granthas, or “secret texts.” Therein, they clarify that the jīva’s essential nature is to have a mood of loving service towards the Lord, not simply to serve the Lord indirectly without knowing it (in the sense that all things ultimately conform to the will of the Lord).

Kṛṣṇadāsa Kavirāja Gosvāmī supports this, explaining that the jīva’s nature (svabhāva) is to possess the conception (abhimāna) of being a servant of the Lord:

The jīva’s intrinsic nature is to have the conception of being a servant of Kṛṣṇa. That knowledge is covered by the misconception of the body being the self.

Needless to say, serving Kṛṣṇa indirectly in some ultimate sense, without even knowing it, can hardly be the defining nature (svarūpa or svabhāva) of the jīva, as such a definition could just as easily designate prakṛti, or matter. Rather, Kṛṣṇadāsa Kavirāja is saying that the jīva’s true nature is to serve the Lord with intentionality, and this is precisely what Śrī Rāmānuja and Jāmātṛ Muni explain also.

In these essential attributes of the soul from Padma Purāṇa 6.226.34–37, it is worth noting śloka 6.226.33, which states: “Here (i.e., in the mantra) the letter u expresses Śrī, who is the support of the world. The wise say that the letter ma expresses the soul, the servant of the two (i.e., Viṣṇu and Lakṣmī).” Padma Purāṇa 6.226.22–23, which Jīva Gosvāmī quotes in Bhakti-sandarbha 178, states much the same. Thus, we see that here again the soul is described as a servant, not only of the Lord but also of Lakṣmī, his śakti, as the Lord’s mercy is possible only through her. In Bhagavat Sandarbha 99, Jīva Gosvāmī clarifies that the Lord’s śakti refers to the goddess Mahā-lakṣmī, who is nondifferent from him, and that the word śakti denotes “the supreme internal energy of Bhagavān” (bhagavad-antaraṅga-mahā-śaktiḥ). He further states in Kṛṣṇa Sandarbha 189 that in Vṛndāvana this internal potency is Śrī Rādhā, who is the original and complete Lakṣmī (svayaṁ-lakṣmī) and the pinnacle of the highest prema (śrī-vṛndāvane śrī-rādhikāyām eva svayaṁ-lakṣmītvam).

From the repeated emphasis in Padma Purāṇa that the jīva is an eternal servant of Hari (and not only Hari, but of the Divine Couple), it is clear that Padma Purāṇa 6.226.37 (and elsewhere) is not simply saying that the jīva, like prakṛti, follows the will of the Lord. To be sure, Padma Purāṇa 6.226.47–48 affirms, “The highest soul, Hari, is the master. I always belong to him. His mind should be employed according to the desire of that Lord only.” This describes the conception of being a servant and articulates the jīva’s essential attribute of dāsa-bhūto harer eva, stated earlier.

Just in case there is still any doubt, let us turn now to the writings of Baladeva Vidyabhūṣana Prabhu specifically on this verse from Padma Purāṇa. In his commentary on the third ray of Vedānta-syamantaka, a work by his guru, Rādhā-Dāmodara Gosvāmī, Baladeva Prabhu writes:

The individual soul must be considered a servant of the Supreme Lord, as stated in the Padma Purāṇa (Uttara-khaṇḍa, 226.37):

“The individual soul is a servant of Lord Hari only, and never of anyone else.”

Someone may argue, “If all individual souls’ status as servants of Lord Hari is an accomplished fact by their own nature and is invariable, then the instructions of the scriptures and so on would be useless.” It is not so, for by revealing their status as the Lord’s servants, such instructions and so on are useful. Without churning, butter certainly does not appear from yogurt, nor does fire appear from wood without friction.2

If Baladeva Vidyābhūṣaṇa Prabhu were interpreting dāsa-bhūtaḥ as merely meaning that the soul in all conditions is dependent upon, and ultimately follows, the will of the Lord, then the hypothetical objection that Baladeva Prabhu raises and goes on to answer would not make any sense. Rather, Baladeva Prabhu’s response to the hypothetical objection makes it clear that the soul is a servant of Hari, but that this nature is concealed or unmanifest, just like butter is inherent in yogurt or fire is inherent in firewood. With the right “churning” or “friction” this unmanifest attribute of the soul becomes manifest or revealed.

Having understood the Padma Purāṇa verse dāsa-bhūtaḥ in context, I will next consider Jāmātṛ Muni’s parallel term, śeṣatva.