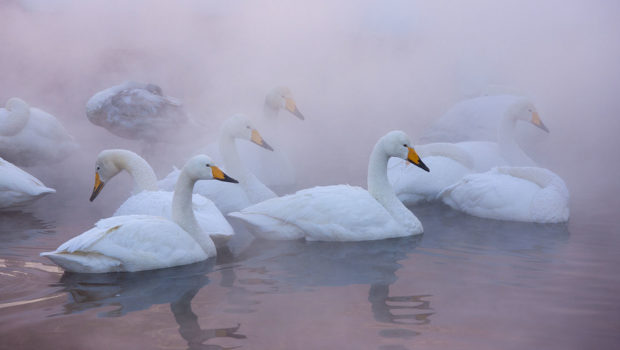 The Simultaneous Inherency and Bestowal of Bhakti—Part 3: The Swan

To illustrate simultaneous inherency and bestowal, I would like to relate an analogy that Sundara Gopāla gave in his presentation mentioned in my first article. This analogy makes clear what might otherwise seem like an opaque concept.

A swan in its natural state swims happily in a lake. Its nature (dharma) of being a swimmer is inherent. However, when a swan is kept in a cage and not allowed to fulfill its nature, it becomes unhappy and exhibits the perverted nature of plucking its own feathers. Despite experiencing such suffering, a swan that has been held captive for a long time will not walk out of a cage even if you open it. Being conditioned by its long imprisonment, the swan needs help to get out (bestowal of mercy). When the swan is lifted out and put on a lake, only then will it exhibit its true nature and thereby experience happiness. So a swan—even if it never has been in the water because of being caged—is meant to swim. One could say that God created the swan with swimming in mind. Nonetheless, because it is caged, its nature does not manifest. So we can ask, “Is it the swan’s nature to swim, even though it is caged, plucking its own feathers, and not touching water?” Yes, that is so even though the swan won’t swim unless someone lifts it out of the cage and places it in the water.

This analogy shows both inherent nature (swimming) and bestowal of mercy (lifting the swan onto a lake). Both are necessary for the caged swan. But we may ask further, “Which is more real—the inherent nature or the bestowal of grace?” They are both real. Can we say that the swan is a swimmer if it doesn’t exhibit that nature without grace? Of course, we can.

For a characteristic to be inherent, it must be an intrinsic part of something’s very nature. The thing or person is incomplete and fails to manifest its nature if the characteristic doesn’t manifest. For example, a person has the potential to be a millionaire; however, being a millionaire is not an intrinsic part of being a person. Since being a millionaire is not an intrinsic aspect of what it means to be a person, a person does not fulfill its nature by being a millionaire, and a poor person can be fulfilled. A person who is poor is no less a person than someone who is rich. In the case of a mango tree, can we say that its nature of producing mangos is solely due to the person who watered it? Or are the mangoes due to something inherent in the seed? Or are both things necessary? Both are necessary, thus showing simultaneous inherency and bestowal.

A soul with any of the five relationships with God is manifesting its nature. For example, one who is in vātsalya-bhāva feels completely fulfilled in the relationship; he or she does not feel less fulfilled than someone in mādhurya-bhāva. In contrast, the jīva takes on a false nature when covered by māyā, and thereby fails to manifest its true nature. An individual soul only displays all aspects of his true nature when he is established as a servant of God.1 Herein we see one shortcoming of saying that bhakti is not inherent but is merely a potential. While being a millionaire is not an intrinsic part of being a person, being a servant of God is an intrinsic part of being an ātmā. Thus, to say that being a servant is merely a potential of the ātmā is to ignore the fact that without being a servant of God, the ātmā displays a false nature. Therefore, we need to acknowledge both inherency and bestowal to capture the true nature of the soul’s relationship with bhakti. The inherency part of the equation underscores the fact that the purpose of our existence is to serve God. Without this, we are incomplete and unfulfilled.

Kṛṣṇadāsa Kavirāja Gosvāmī recounts an excellent parable that Caitanya Mahāprabhu told Sanātana Gosvāmī that explains simultaneous inherency and bestowal. Before telling the parable, Mahāprabhu speaks several verses, including this one:

Having forgotten Kṛṣṇa, the living entity has been attracted by the external feature from time immemorial. Therefore, the illusory energy [māyā] gives him all kinds of misery in his material existence.2

Although the verse says that the jīva has been attracted to the external energy from time without beginning (anādi), it is significant that Mahāprabhu uses the word bhuli’ (having forgotten), which effectively conveys the idea that the relationship already exists. The parable goes as follows: a learned astrologer goes to the house of a poor and distressed man and tells him that the man’s father, who was very wealthy, died elsewhere and was not able to reveal that he had left a great treasure as an inheritance. Similarly, the Vedic literature tells us that we have a great treasure in the form of a relationship with Kṛṣṇa, which is our inheritance. The astrologer advised the man exactly how to remove the dirt to reveal the inheritance. There is likewise a proper way to excavate our treasure: we should give up karma, jñāna, and yoga, and instead take to bhakti, by which Kṛṣṇa can be fully satisfied.3

As the similarity of terms suggests, inherited implies a dimension of inherence. If I am searching for my inheritance, it is because I own it inherently (by virtue of my relational identity as an inheritor). By the grace of a sadhu (or the astrologer in the parable), I can locate that inheritance and manifest my inherent identity as an inheritor. Thus, the story clearly shows both bestowal (since the man would not have known about the inheritance without the mercy of the astrologer) and inherency (since the man already possessed a treasure that he didn’t know about). After the parable, Mahāprabhu says, “In all revealed scriptures, beginning with the Vedas, the central point of attraction is Kṛṣṇa. When complete knowledge of him is realized, the bondage of māyā, the illusory energy, is automatically broken.”4 By knowing Kṛṣṇa, one knows oneself.

The fact that bhakti is bestowed is clearly established throughout the Sandarbhas. In the coming articles, I will thus not endeavor to establish this self-evident point. However, one must not think that because I am establishing inherency, I am negating bestowal. But how can this be? Why would bhakti need to be bestowed if it is inherent? Although I will answer this scripturally later, let me begin by answering in more simple terms. Those who say bhakti is inherent would say that our inherent nature is lost to us (think of the swan trapped in a cage) and we are consequently suffering and cannot get out of our predicament without help. As Paramātma Sandarbha, quoting Śrīmad Bhāgavatam (11.22.10) says, “Self-realization for the jīva, who is saddled with beginningless ignorance, is not possible by his own efforts. It is possible only if knowledge is imparted to him by another who knows the reality.”5

Therefore, although it is our nature to be a servant of God, this nature is unmanifest in our present condition. Because of the extent of our material conditioning, there is no practical difference in terms of sādhana between those who accept inherency and those who do not. Therefore, all the verses that establish the need for accepting a guru, bhakti as abhidheya, and so forth are accepted by both sides of the issue.

The Difference between the Jīva and the Ātmā

An important point to keep in mind when sorting out this controversy is the difference between the ātmā and the jīva.6 In a general sense, the liberated soul is referred to as ātmā, and the bound soul as jīva. Therefore, when you hear a statement about the jīva, such as “the jīva has no bliss,” you have to remember that this statement is not discussing an eternal characteristic of the ātmā. Although the ātmā is inherently blissful, when he is covered, he doesn’t realize his true nature.

For example, in the previous analogy, the man who didn’t realize that he had an inheritance thought that he was poor, although he was actually rich. Similarly, although one of the svarūpa-lakṣaṇa (intrinsic characteristics) of the jīva is that he is cid-ānandātmakaḥ (intrinsically of the nature of knowledge and bliss), one of his taṭastha-lakṣaṇa (extrinsic or accidental attributes) is that he is identified with the material world and is thus ignorant and suffering. Because the soul has both intrinsic and extrinsic characteristics, it would be a mistake to think that every statement about the jīva is describing an intrinsic characteristic. That said, there is a lot of overlapping of the terms. For example, the soul’s twenty-one characteristics, being eternal, can be said to be the characteristics of both the jīva or the ātmā. Furthermore, as we will see in part 11, Jīva Gosvāmī sometimes even refers to eternally liberated devotees as taṭastha-jīvas.

In this article, we have touched on the paradox of simultaneous inherence and bestowal. In doing so, we have seen that whether a characteristic is intrinsic or extrinsic, fully manifest or covered, is something that must be considered. As such, having a solid understanding of the foundational principles covered in this article is immensely helpful. In the next article, we will look at what previous Vaiṣṇava ācāryas have said in regard to bhakti being simultaneously inherent and bestowed.

18 Responses to The Simultaneous Inherency and Bestowal of Bhakti—Part 3: The Swan