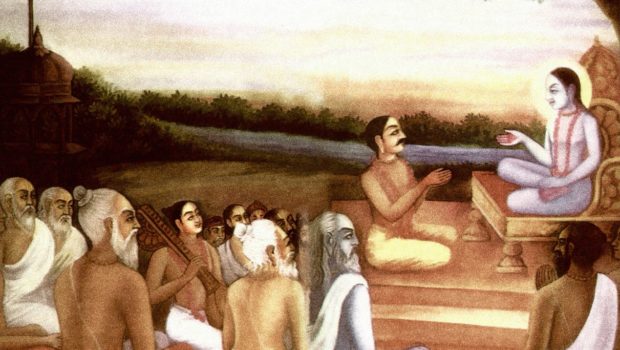 The Absolute and Relative Side of the Guru: The Onus is on Us

They say that marriage is the most important step in a person’s life, because it is for life. This rang more true in the past, up until a few decades ago when the divorce rate became rampant. But that’s a story for another time.

All throughout antiquity, marriage was a very serious undertaking. Entire dynasties, countries, and peoples would have their destinies sealed by this union and pact between two people. Making it sacred to the eyes of God made it all the more important for the people getting married, as well as the onlookers. All the way down to the life of commoners, every parent from a culture where arranged marriage is and has been the norm will tell you that marriage is about stability and peace — love will come later.

There is a Christmas movie where two men who hate each other get stuck in an elevator for hours on their way to join their respective families on Christmas Eve. In time, they begin to see the good side of one another, and a friendship sprouts, where they each see the faults of the other as the ornaments of their new friend. This is human nature. The tendency to love will surface out of any given circumstance.

I married very late in life, out of love, and I have no material stability as I am writing, so I must have understood nothing about life. What I did understand much earlier on is that the most important step in a person’s life is not marriage, but initiation. If a spouse is for life, Sri Guru is for eternity.

This relationship is much more complex, with very deep and radical repercussions in the life of anybody who takes initiation from a guru. The idea of taking initiation does not express the magnitude of the onus that is upon us at the time of sealing this relationship. After all, taking is easy. Anybody can receive a mantra and be accepted by a person who is willing to share it all for the price of one’s own goodwill and show of faith. The guru is well aware of what it’s like to be the receptacle of an undeserved shower of mercy.

The disciple, on the other hand, has the onus of analyzing and testing the guru before making this very important decision, whereby he or she is asked to give it all. Once we’ve listened to both our head and our heart, and have ascertained that the Absolute is coming down to us through that one particular person who is willing to accept us, the onus is still on us to make it all happen.

There is no guru without disciples.

Ekale isvara krsna, ara saba bhritya in one sense can be understood to mean: the only guru is Krishna, everybody else is a disciple. Even the guru is a disciple and he or she is as qualified to be guru as they strive toward perfection as disciples; not as good members of society, not as charismatic people, or good politicians, counselors, or managers, but as servants.

Marriage is based on equality and mutuality. The relationship with the guru is also mutual, but ultimately, the guru doesn’t need us, because he or she is first and foremost a disciple. The spiritual life and success of the guru revolve around that consideration.

Once we find that the Absolute is available in that person and we find stability in that relationship, only then should we agree to give ourselves entirely, knowing that we will never be able to match the dowry our guru is coming with. Anything we can give from our side will never be enough, and for as long as we give less than our whole self in this relationship we cannot fault the other side for anything. However, what do “more”, “less” or “everything” mean or matter in relation to the Infinite? What matters is our attitude and well-reposed feelings.

The very first question I asked my gurudeva even before he initiated me was: “How can we repay the debt we have with our guru?” He smiled lightly, pleased with the question of this clueless boy sitting in front of him, and simply said: “You can’t.” However, we should act every minute as if we could. Feeling is what determines reality and makes the impossible, possible. Bhava shapes tattva.

If we want to enter the stream of the Absolute, Infinite, and Eternal, we are to become absolute, infinite, and eternal. Or rather, realize that it’s what we are. In order to do that, we need to shed any relative, circumstantial and temporary consideration; any belief and concept we have of ourselves.

In a marriage, two people aim at multiplying their bodies, values, wealth and everything else that characterizes them, or who they think they are, by producing children, or who they think to be their children. However, in the relationship with our guru, we are called to efface ourselves until all that is left is… our self. A spark of the Infinite, the Eternal, and the Absolute.

Once we have latched onto this disciplic succession. or chain of disciples, the onus is on us to imbibe the perfection of discipleship that we see in our guru. Our concern and focus should be so total that we wouldn’t have time to analyze any way in which the person through whom Sri Guru expresses itself is falling short from a relative point of view.

By their own definition and nature, concepts such as infinite, eternal, and absolute escape the grasp of our comprehension. As such, it’s not through intellectual deliberation and dissertations that we weld our link with this chain, but through the mystical power of service; even mindless service.

If our guru tells us to count all the grains of sand on the beach, inasmuch as we try to do it with an attitude of service, our position will be nothing but glorious. Whether it’s Sri Guru testing us in incomprehensible ways, or God forbid, the person we chose as our guru is insincere and unqualified, inasmuch as we do our part, practice surrender, and cultivate a harmonizing attitude, our position won’t be tarnished. Our advancement won’t be voided. Ultimately, sincerity is invincible, and everybody will receive what corresponds to them based on their thoughts, words, actions, and attitude.

Conversely, what do we gain from proving that our guru is wrong in whichever way? Just that. We found the Absolute, and we kept our focus on the relative, thus missing a huge opportunity to grow. We aspire for the Infinite, but we are not willing to grow beyond the limit of what makes sense to us.
We live in the world of right and wrong, but also the world of illusion and relativity. What is right for somebody is wrong for somebody else. Precisely the relativity we decided to pull ourselves out of when we accepted Sri Guru through a particular person.

Ultimately, there is no real wrong in a world where everybody receives not a hair more or less than what they put out into the environment themselves. And that’s when we begin to realize that the world of justice we are steeped in is actually the world of mercy we are aspiring for, where everything is harmonized according to a higher, absolute principle.

The person of the guru may be wrong on a number of levels and accounts, but who we surrender to is Sri Guru as a principle; the same principle our own guru is surrendered to. If we subscribe to an absolute, transcendental narrative, we must be willing to relinquish relative and material considerations.

Absolute means one thought and all thoughts. All harmonized.

It’s hard to comprehend, if not impossible, nor should we try to. The very act of wanting to comprehend the Absolute would imply that we are superior to all there is. In other words, we see ourselves as the Absolute, making even the guru and what they represent appear as relative. In actuality, both the absolute and the relative side of Sri Guru should be seen as absolute by us. If the disciples are to be seen as the extended limbs of the guru, let them be the relative side. Where the guru is lacking in empathy or any other quality, it means that that quality is to be found in one of his or her limbs. Those limbs will serve the guru and the whole corpus of disciples with their quality, and harmony will be maintained.

Like any Muslim or Hindu mother will tell you: “First search for stability, then make a contract. Then love will come.”

When love makes its appearance, even the relative side of Sri Guru and any idiosyncrasies that may come along with the person or personality of the guru will be harmonized by us. It’s not through intellect and considerations of material justice that we enter this stream, but magnetically, drawn by love and service.

This is the position of Srimati Radharani. She is the condensation of love and service; the energy and substance that has the power to draw us to Krishna and Krishna to us. Madana-mohana-mohini.